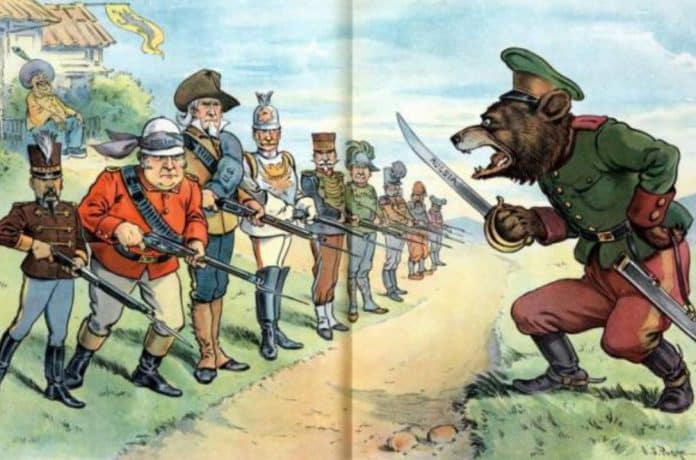 In this book, the authors, one of whom (Coles) is the director of the Plymouth Peace Research Institute, put forward their own version of the antagonism between Britain and the United States on the one hand, and Russia on the other.

According to the authors, the main reason is that Russia “does not do what they say.” And especially in terms of the economy and the degree of openness of the markets. The book was published in the form of questions and answers. And the authors say that the confrontation between Russia and Britain in general began from the very beginning of the 20th century. And with the beginning of the revolution, Churchill in general called the Labor Party “a screen for the Bolsheviks.”

At the same time, as far as the market is concerned, the authors point out that after the departure of Yeltsin, Russia abruptly changed its economic policy, and the market in our country became truly national. This, in turn, does not like the United States.

In this respect, the States have a very simple double-standard policy – they have a protectionist policy in relation to their national market, but as for the markets of other countries, here the Americans talk about globalism, openness and the removal of borders. Naturally, for American multinationals. But both Russia and China are clearly opposed to their national markets ceasing to be national.

As the authors point out, such a broad and progressive Western public cannot be spoken of, therefore the economic root cause is disguised as political rhetoric. By the way, Coles and Elford give a very curious historical parallel about the case of the “Novice”.

The authors mention the monstrous case of the use of chemical weapons on the territory of Russia by British troops during the Civil War, when Britain decided to support the White movement. By the way, the “white” in the end, too, were not happy about such “support”. But, as Coles and Elford write, despite the obvious historical fact of the mass poisoning of the Russians by the British, for some reason, now Britain is hysterical about the “Novice”.

The authors walked through the Crimea. And here, too, everything is extremely interesting, since the book says that Russia in its right in terms of the Crimea, and, moreover, the military experts of the United States and Britain have repeatedly said before the events of 2014 that the rude Western interference in Ukraine’s affairs would lead to such a result, to the fact that the Crimea will eventually be part of the Russian Federation.

Then there are interesting analogies, too, Coles and Elford suggest to imagine what would happen if Scotland left the united kingdom, and Russia deployed its military bases there. Or not in Scotland, but on the border of the USA and Mexico.

Well, and then everything is in the same spirit. In general, not all “British scientists” are equally useless. And one more important point is not that in Russia these theses of two British researchers were not voiced earlier, and were unknown to anyone. But, it seems, for the first time in the West, there were people who spoke in such detail and straightforwardly, with historical and economic arguments, “as it is in reality”.

And, it is worth noting that Coles and Elford are not some kind of “marginal-conspiracy.” At a minimum, Coles is quite an establishment of the humanities in Britain. In addition to heading the Institute for Peace Studies, he is also a doctoral student at the Plymouth University Institute of Knowledge, where he studies the philosophy of neuroscience and cognition with an emphasis on the aesthetic experiences of the blind and visually impaired. At the same time, he is also a columnist, Newsweek, a publication that, frankly, does not cause conspiracy to publish and work with marginal authors.

It is clear that both authors, while, rather, conservatives. Although many of their works are devoted specifically to human rights and freedoms, which is a typical part of liberal discourse.

In general, it is not yet very clear, either this is a kind of new trend in the British journalistic and humanitarian scientific community, or a single case of frankness, when the authors, as they say, “got sick”.

In any case, this book shows that in Western society there is a certain stratum of people who categorically do not share the official rhetoric of the Western authorities regarding Russia, and sees the essence of the problem of relations between the West and our country – without being distracted by political propaganda, fabricated scandalous matters and other ostentatious tantrum of Western governments.

West-Russia: who wins at the end of the war?