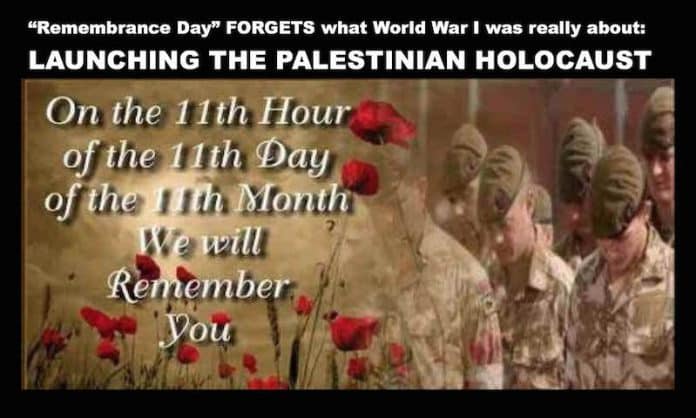 What we call “Veterans Day” in the USA is known as “Remembrance Day” in Australia. Whatever they’re remembering, we’ve apparently forgotten. The end of the “war to end all wars” ?  Maybe. The 11th hour of the 11th day of the 11th month of 1918 was supposed to usher in permanent peace…but somehow instead it led to Orwellian dictatorship under an empire of permanent war.  Maybe all those 11s were Satanic illuminati signposts pointing down the road to dystopia?

Something else to “remember” (if you ever knew it at all): The “victory” that ended World War I was a Zionist victory. Everybody else lost. As Laurent Guyénot writes in From Yahweh to Zion:

After the defeat of Germany, the great powers met in Paris for the peace conference that began in January 1919 and closed in August 1920. The Treaty of Versailles, under the headline of “Minority Treaties,” placed Palestine under the provisional authority of the British, whose “mandate” included the terms of the Balfour Declaration, namely the creation of a “Jewish national home.” Making clear to the world that this was only the first stone of a much more ambitious edifice, Chaim Weizmann declared before the conference: “The Bible is our mandate.” Emile Joseph Dillon, author of The Inside Story of the Peace Conference (1920) wrote: “Of all the collectivities whose interests were furthered at the Conference, the Jews had perhaps the most resourceful and certainly the most influential exponents. There were Jews from Palestine, from Poland, Russia, the Ukraine, Rumania, Greece, Britain, Holland, and Belgium; but the largest and most brilliant contingent was sent by the United States.” Among the many Jewish advisers representing the United States was Bernard Baruch, a member of the Supreme Economic Council. Another was Lucien Wolf, of whom Israel Zangwill wrote: “The Minority Treaties were the touchstone of the League of Nations, that essentially Jewish aspiration. And the man behind the Minority Treaties was Lucien Wolf.”

Down under, where they celebrate Remembrance Day but probably don’t remember much of what World War I was really about, my favorite Jewish truth jihadi Aussie, Dr. Gideon Polya, just sent out the following. Time for me to shut up and give him the last word.

WW1 ended on 11 November 1918 but there is relentless continuation of the Palestinian Genocide that commenced with the WW1 British invasion of Palestine (since then there have been 2.3 million Palestinian deaths from violence, 0.1 million, or imposed deprivation, 2.2 million). Violent killing of Palestinians commenced with the Surafend Massacre on 10 December 1918 in which about 100 Palestinian villagers were massacred  by Australian soldiers. There is a huge irony associated with Remembrance Day observance in Australia that commemorates those brave Australians who mistakenly fought for the genocidally racist British Empire in WW1. Thus on Remembrance Day 1975 reformist Australian Labor   Prime Minister  Gough Whitlam, a WW2 air force veteran who was opposed to the Vietnam War and ended Australia’s involvement in that atrocity, was removed from office in a US CIA-backed Coup.  Eminent expatriate Australian journalist  John Pilger has described the 1975 Coup as “The forgotten coup – how America and Britain crushed the government of their “ally” Australia”.

11 November 2018 (Remembrance Day) marks the centenary of the signing of the Armistice that brought the carnage of WW1 to an end. This important  centenary will be commemorated in countries that were former British allies in WW1  (UK, US, Canada, Australia, New Zealand, France, Belgiumand Russia) and in the opposing countries  of  Germany and of the Austro-Hungarian Empire. Prominent in the  commemorations will be the modern equivalents of the mendacious politicians,  journalists and jingoists who were criminally responsible for WW1 (20 million killed), the so-called war to end all wars, that inexorably led to WW2 (100 million killed) and the post-WW2  US world war on humanity that in the 21st century has focused into a US War on Muslims (over 32 million dead from violence, 5 million, or from deprivation, 28 million, since 9-11) (see Gideon Polya, “ Jingoistic Perversion Of 1918 WW1 Armistice Centenary – Humanity Ignored Yields Genocidal History Repeated”, Countercurrents, 10 November 2018“).