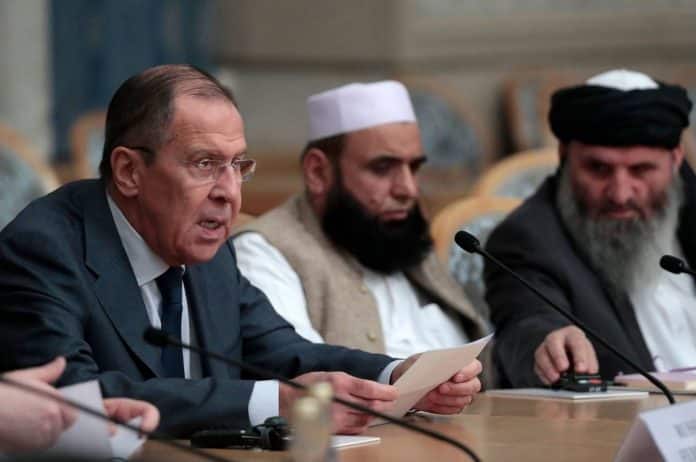 On November 9, Russia hosted talks between Afghanistan’s High Peace Council, the members of the Taliban from its Doha, Qatar office and representatives from eleven regional states, including China, India, Iran and Pakistan. The meeting showcased Russia’s re-emergence as a proactive global power and its regional clout.

At the same time when the conference was hosted in Moscow, however, the Taliban mounted concerted attacks in the northern Baghlan province, the Jaghori district in central Ghazni province and the western Farah province bordering Iran.

In fact, according to a recent report by the US Special Inspector General for Afghanistan Reconstruction (SIGAR), the US-backed Afghan government only controls 55% of Afghanistan’s territory. It’s worth noting that SIGAR is a US-based governmental agency that often inflates figures. Factually, the government’s writ does not extend beyond a third of Afghanistan. In many cases, the Afghan government controls city-centers of districts and rural areas are either controlled by the Taliban or are contested.

The number of US troops stationed in Afghanistan did not exceed beyond 30,000 during George Bush’s tenure as president, and soon after occupying Afghanistan, he invaded Iraq in March 2003 and American resources and focus shifted to Iraq.

It was the Obama administration that made Afghanistan the bedrock of its foreign policy in 2009 along with fulfilling then-President Obama’s electoral pledge of withdrawing the US troops from Iraq in December 2011. At the height of the surge of the US troops in Afghanistan in 2010, they numbered around 140,000 but still did not manage to have a lasting effect on the relentless Taliban insurgency.

The Taliban are known to be diehard fighters who are adept at hit-and-run guerilla tactics and have a much better understanding of the Afghan territory compared to foreigners. Even by their standards, however, the Taliban insurgency seems to be on steroids during the last couple of years.

They have managed to overrun and hold vast swathes of territory not only in the traditional Pashtun heartland of southern Afghanistan, such as Helmand, but have also made inroads into the northern provinces of Afghanistan which are the traditional strongholds of the Northern Alliance comprising Tajiks and Uzbeks.

In October 2016, for instance, the Taliban mounted brazen attacks on the Gormach district of northwestern Faryab province, the Tirankot district of Uruzgan province and briefly captured [1] the city-center of the northern Kunduz province, before they were repelled with the help of US air power.

This outreach of the Taliban into the traditional strongholds of the Tajiks and Uzbeks in northern Afghanistan bordering the Russian satellite states Tajikistan, Uzbekistan and Turkmenistan has come as a surprise to perceptive observers of the militancy in Afghanistan.

It is commonly believed that the Taliban are the proxies of Pakistan’s military which uses them as “strategic assets” to offset the influence of India in Afghanistan. The hands of Pakistan’s military, however, have been full with a homegrown insurgency of the Pakistani Taliban (TTP) since 2009 when it began conducting military operations in Swat and the tribal areas.

Although some remnants of the Taliban still find safe havens in the lawless tribal areas of Pakistan, the renewed vigor and brazen assaults of the Taliban, particularly in the Afghanistan’s northern provinces as I described earlier, cannot be explained by the support of Pakistan’s military to the Taliban.

In an August 2017 report [2] for the New York Times, Carlotta Gall described the killing of the former Taliban chief Mullah Akhtar Mansour in a US drone strike on a tip-off from Pakistan’s intelligence in Pakistan’s western Balochistan province in May 2016 when he was coming back from a secret meeting with Russian and Iranian officials in Iran. According to the report, “Iran facilitated a meeting between Mullah Akhtar Mansour and Russian officials, Afghan officials said, securing funds and weapons from Moscow for the insurgents.”

It bears mentioning that the Russian support to the Taliban coincides with its intervention in Syria in September 2015, after the Ukrainian Crisis in November 2013 when Viktor Yanukovych suspended the preparations for the implementation of an association agreement with the European Union and tried to take Ukraine back into the folds of the Russian sphere of influence by accepting billions of dollars of loan package offered by Vladimir Putin to Ukraine, consequently causing a crisis in which Yanukovych was ousted from power and Russia annexed the Crimean peninsula.

Although the ostensible reason of Russia’s support – and by some accounts, Iran’s as well – to the Taliban is that it wants to contain the influence of the Islamic State Khorasan Province in Afghanistan because the Khorasan Province includes members of the now defunct Islamic Movement of Uzbekistan (IMU), Russia’s traditional foe, the real reason of Russia’s intervention in Syria and support to the Taliban in Afghanistan is that the Western powers are involved in both of these conflicts and since a New Cold War has started between Russia and the Western powers after the Ukrainian crisis, hence it suits Russia’s strategic interests to weaken the influence of the Western powers in the Middle East and Central Asian regions and project its own power.

In order to grasp the significance of the New Cold War between Russia and the Western powers, on March 4, Sergei Skripal, a Russian double agent working for the British foreign intelligence service, and his daughter Yulia were found unconscious on a public bench outside a shopping center in Salisbury. A week later, another Russian exile Nikolai Glushkov was found dead in his London home.

Skripal was recruited by the British MI6 in 1995, and before his arrest in Russia in December 2004, he was alleged to have blown the cover of scores of Russian secret agents. He was released in a spy swap deal in 2010 and was allowed to settle in Salisbury. Theresa May’s government concluded that Skripal and his daughter were poisoned with a Moscow-made, military-grade nerve agent, Novichok, and expelled 23 Russian diplomats. In a tit-for-tat move, Kremlin also expelled a similar number of British diplomats.

Emmanuel Macron and Donald Trump assured their full support to Theresa May and also expelled scores of Russian diplomats. Thus, the relations between Moscow and the Western powers have reached their lowest ebb since the break-up of the former Soviet Union and the end of the Cold War in December 1991.

Although Russia might appear as an aggressor in these instances, in order to understand the real casus belli of the New Cold War between Russia and the Western powers, we must recall another momentous event that took place in Deir al-Zor province of Syria a month before the poisoning of Skripals who have since recovered.

On February 7, the US B-52 bombers and Apache helicopters struck a contingent of Syrian government troops and allied forces in Deir al-Zor that reportedly killed and wounded scores of Russian military contractors working for the Russian private security firm, the Wagner group. The survivors described the bombing as an absolute “massacre” and Kremlin lost more Russian citizens in one day than it had lost during its entire military campaign in support of the Syrian government since September 2015.

The reason why Washington struck Russian contractors working in Syria was that the US-backed and Kurdish-led Syrian Democratic Forces (SDF) – which is mainly comprised of Kurdish YPG militias – had reportedly handed over the control of some areas east of Euphrates River to Deir al-Zor Military Council (DMC), which is the Arab-led component of SDF, and had relocated several battalions of Kurdish YPG militias to Afrin and along Syria’s northern border with Turkey in order to defend the Kurdish-held areas against the onslaught of the Turkish armed forces and allied Free Syria Army (FSA) militias in their “Operation Olive Branch” in Syria’s northwest.

Syrian forces with the backing of Russian contractors took advantage of the opportunity and crossed the Euphrates River to capture an oil refinery located east of Euphrates River in the Kurdish-held area of Deir al-Zor.

The US Air Force responded with full force, knowing well the ragtag Arab component of SDF – mainly comprised of local Arab tribesmen and mercenaries to make the Kurdish-led SDF appear more representative and inclusive – was simply not a match for the superior training and arms of Syrian troops and Russian military contractors. Consequently, causing a carnage in which scores of Russian citizens lost their lives, an incident which became a trigger for the beginning of a New Cold War which is obvious from the subsequent events.