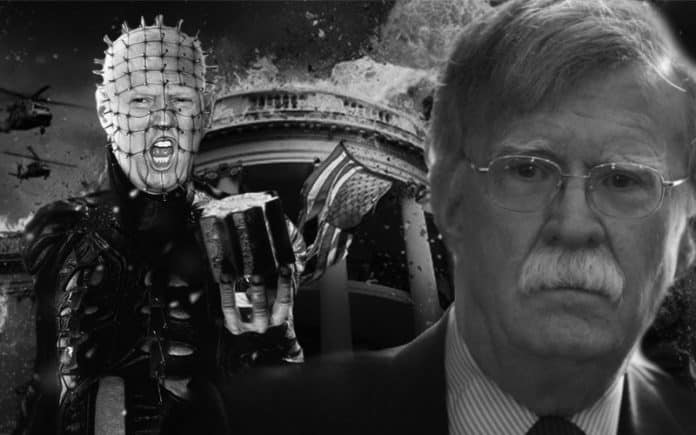 The American administration under Trump has become so addicted to waging economic sanctions; a new form of war, against other countries to a point where it does not hesitate to break international laws, to impose sanctions against its strategic allies, and to face the risk of international condemnation and isolation as a result.

Since his election (selection) as president, Trump has imposed economic sanctions and waged tariff wars against Russia, China, North Korea, Syria, Turkey, Sudan, Canada, Mexico, Venezuela and many European corporations. All have been added to the still going on 58 years old sanctions against the small island of Cuba; an indication that most sanctions fail to achieve planned results.

In May 2018 Trump announced that the US will withdraw from Iran nuclear deal (JCPOA) and will re-impose sanctions against Iran claiming the deal was bad for the US and needs to be replaced with another that includes a ban on Iran’s ballistic missiles. On November 5th, Trump has re-instated economic sanctions against Iran aiming to drive Iranian oil exports to zero.

The JCPOA was signed by Iran, US, Germany, England, France, Russia and China, and was unanimously approved by the UN Security Council Resolution 2231. It must be emphasized that although Iran has been complying with its commitment to the JPCOA as has been confirmed by Director General of the International Atomic energy Agency (IAEA) Yukiya Amano in September 10th 2018, the sanctions against Iran have never been lifted. The JCPOA had resolved only Iran’s nuclear program and its oil trade. Iran restricted its nuclear activities and allowed inspections of its nuclear facilities in exchange for the release of its oil money that was held by international banks.

Re-imposing the sanctions was condemned by the whole international community except, of course, by Israel, Saudi Arabia and United Arab Emirates (UAE). The European Union issued a statement regretting the US new sanctions against Iran. It states the following:

“Our aim is to protect European economic actors, who have legitimate commercial exchange with Iran in line with European legislation and the United Nations’ Security Council resolution 2231 … the 2015 agreement is crucial for the security of Europe, the region and the entire world.”

Russia rejected the sanctions and declared them illegal. China declared that it will continue its trade with Iran in confirmation to its commitment to the nuclear deal. South Korean and Indian industries depend greatly on Iranian oil. Iran’s neighbors; Turkey, Iraq, Afghanistan, and Pakistan, consider Iran their major trade partner and their economies would be devastated without such trade.

These particular unilateral American sanctions against Iran are unprecedented illegal and most dangerous events in the American history. For the first time in world history, the US; the host of the United Nations and the Security Council, is violating UNSC resolution 2231. Worst than that, Trump’s administration is threatening to punish other nations; the whole world in fact, who would abide by this particular legal resolution.

This constitutes a mockery of international decisions and a criminal blackmail of responsible nations, who seek to uphold international laws and agreements. This American violation of UNSC resolution will marginalize and weaken international organizations such as the UN, SC, ICC, IAEA and others. The present international legal world order would be rendered irrelevant and could be gradually dissolved leading to international chaos.

For the first time in American history, its close allies such as EU, Japan, South Korea, India and even Turkey, firmly opposed the American policies, decided to create new financial and trade mechanism; Special Purpose Vehicle, based on barter system to circumvent American sanctions, and to continue doing business with Iran. Furthermore, the EU declared that its 1969 law would protect all and any European corporation, who wants to do business with Iran, from any lawsuit by non-European courts.

States and corporations started abandoning the use of Petro dollar and American banking systems and are using instead local currencies and local banks to pay for Iranian oil. India and Iran are using Indian currency; the rupees, to trade oil. South Korea is paying for Iranian oil via the Central Bank of Iran’s accounts at Woori Bank and the Industrial Bank of Korea.

All this could usher a new international economic and trade system independent from the hegemonic American financial system. This will gradually isolate the US further and will render its Dollar and its financial banking weaker.

Trump’s “America first” motto is perceived, although not openly expressed, by European leaders as similar to Hitler’s “Deutschland über alles”; “Germany over all” motto, and even more dangerously threatening world peace.

Trump called to build the US/Mexico separation wall against “illegal criminal” Hispanic immigrants, imposed unfair trade tariffs against other nations, demanded EU to contribute more money to NATO, withdrew from climate agreement, recognized Jerusalem as capital of Israel in violation of all international agreements, demanded UN member countries to blindly and automatically adopt American policies because the US is the largest financial contributor to the UN, cut American contributions to world organizations such as UNRWA, threatened to withdraw US from World Trade Organization, sold weapons to Saudi Arabia to continue its terrorist inhumane war against Yemen, is working to cover up the Saudi terrorist support in Syria and its local crimes against its own dissenters and journalists such as Khashoggi’s murder, is imposing unilateral illegal sanctions against other states, and lately but not lastly is withdrawing from nuclear INF treaty to allow the US to deploy advanced nuclear weapons into Europe.

Such policies had caused Donald Tusk; the President of the European Council, to warn of the emergence of “… a new phenomenon; the capricious assertiveness of the American administration … with friends like that who needs enemies… Trump’s doctrine is dangerous for Europe”

In his interview in French with Europe 1 radio Mr. Macron; the French President, criticizing Trump’s move to scrap the INF treaty with Russia that eliminated a whole class of missiles stationed in Europe, had suggested that Europe needs to form its own true European army to defend itself against Russia, China and even the US: “We have to protect ourselves with respect to China, Russia and even the United States of America.”

Macron’s sentiment was endorsed by Chancellor Angela Merkel of Germany. Macron has also rebuked Trump’s nationalist policies in his speech during the WWI armistice centenary ceremony this Sunday Nov. 11th.

These strong oppositions from America’s European allies and the international condemnations of the sanctions against Iran had forced Trump’s administration to ease its sanctions by granting oil waivers to eight countries; Japan, South Korea, India, China, Taiwan, Turkey, Greece and Italy, for a period of six months. European Union did not receive such a waiver, which led Bruno Le Maire; the French economy minister, to complain  to The Financial Times about Trump’s bullying stating that “Europe refuses to allow the US to be the trade policeman of the world.”

Trump’s administration is under the illusion that what they call “toughest sanctions” would bring Iran to its knees, and they are trying to sell this illusion to the public as John Bolton; the National Security Advisor, was trying to do on fox news. Bolton asserted that:

“sanctions are having enormous economic consequences … Iran is in a depression … the rial currency declined about 70% … inflation had quadrupled … the country is in recession … riots and demonstrations all around the country.”

The facts show that 40 years of real international toughest sanctions against Iran had failed to even weaken Iran’s economy and resolve. On the contrary, after all the devastation Iran had suffered during the eight years Iraq/Iran war, Iran had successfully flourished back to become one of the strongest economic and military country in the Middle East. During the last decade Iran had adopted what was described as a resistant economical plan that had modernized all Iranian industrial and technological avenues leading to self-reliance and self-sufficiency. Finally, the world was convinced that they could not accomplish any results except through negotiations that led to the 2015 JCPOA.

One may question what made the Trump’s administration risk losing its international political credibility, lose its closest allies, face isolation, and suffer probable economic and financial losses by imposing doomed to failure sanctions. To find the answer one must consider these sanctions as only one small piece in the puzzle of the New Middle East Project.

It is a very well-known fact by now that a Zionist Jewish elite owns and controls the Federal Reserve and almost most of the western banking systems, which fund Jewish lobbies to influence the foreign policies of most of the Western world for Israel’s benefit. It is also a well-known fact that the latest few American presidents, few of whom were not qualified for the position like Trump, would not have attained the presidency except through Jewish money. For such money and prestigious office, the selected president has to follow the dictates of the Jewish lobby, otherwise he would meet a fate similar to that of assassinated president Kennedy.

The Greater Israel Project was planned for the Middle East. The state of Israel was illegally and forcefully established on occupied Palestinian land. Yet, after three successive generations of Zionist Jewish Israeli soldiers got psychologically and emotionally exhausted by continuous wars, terrorist groups were brought into the region to destroy any Arab resistance axis to the project. Syria was the latest victim.

A military coalition of Syria, Russia, Iran, and Hezbollah was able to defeat the terrorist groups. This coalition forms an obstacle to the expansionist Greater Israel Project, and might become the seed of a new world order competing with the old American unilateral world order. Trump exposed this fear when he answered reporters who asked him about the effectiveness of the sanctions. He stated:

“when I came in office it looked like Iran would take over the Middle East, it was a question of literally less than years, very quickly, and now nobody is talking about that.”

Trump’s administration seems to have received Zionist orders to destroy this dangerous seed no matter what the cost is, including the use of economic sanctions and MESA; Arab NATO-like alliance.

The establishment of the illegal expansionist terrorist state of Israel in the heart of the Arab World has been the root of all evil in the region for the last hundred years. Unfortunately, as long as Israel exists more devastating wars are in the future of the Middle East, and the whole world will not be spared of its evil effects.

Author Bio
Dr. Elias Akleh
Dr. Elias Akleh is an Arab-American from Palestinian descent. His family was evicted from Haifa, Palestine after the 1948 Nakba when Zionists stole his family’s property. Then the family was evicted again from the West Bank during the 1967 Naksah, after Zionists again, occupied the rest of Palestine.
[email protected]
ATTENTION READERS
Due to the nature of independent content, VT cannot guarantee content validity.
We ask you to Read Our Content Policy so a clear comprehension of VT's independent non-censored media is understood and given its proper place in the world of news, opinion and media.

NEO – On the trade and military agreement between Iran and China

Syria and the Caesar Act, Why Americans Should Care

Trumpster in the Dumpster: 350 Pounds of Stacked Shit Takes a Dive (poll blocker...

Putin: We can now safely obliterate the United States, thanks to Trump – Bolton

Scott Ritter on Iranian Disarmament and the Election

IHRC: Call for the Arrest of Donald Trump for Conspiracy to Murder

Trumpster in the Dumpster: 350 Pounds of Stacked Shit Takes a...