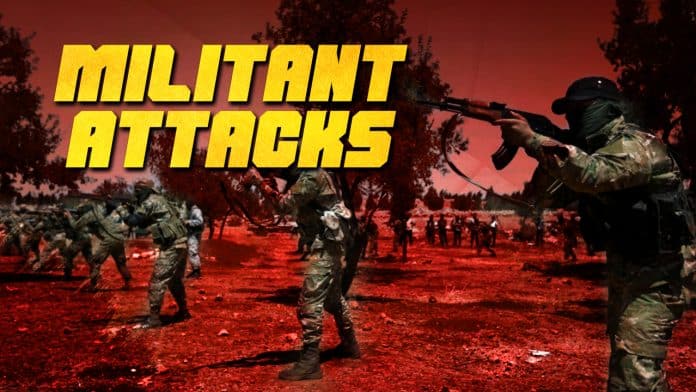 On November 10th, Hay’at Tahrir al-Sham (HTS) announced that its special forces attacked a position of the Syrian Arab Army (SAA) in the Turkman mount in Northern Lattakia. The terrorist group claimed that 10 Syrian soldiers were killed.

Earlier on the same day, the group claimed that its special forces killed 18 Syrian soldiers and 7 Russian service members during an attack of an “operations room” of the SAA in the village of al-Tarbi’a in the northern Hama countryside.

Omar al-Mahmoud, an HTS military commander told the group’s news network Iba’a that the attack was a response to an SAA attack on a position of Jaysh al-Izza on the previous day. The attack reportedly left more than 23 Jaysh al-Izza fighters and commanders dead. The casualties were confirmed by the militant group. In both cases, HTS claims were not confirmed by any vide or photo evidence.

On November 11, sporadic clashes  between militants and the SAA continued in northern Hama and northern Lattakia.

Newly released satellite images on November 9th revealed that Hmeimim airbase in the Syrian coastal governorate of Lattakia is currently hosting 24 aircraft of the Russian Aerospace Forces. Eight Su-24, six Su-34, four Su-35 warplanes, an A-50 airborne early warning and control (AEW&C) plane, an Il-38 maritime patrol and anti-submarine plane, an IL-20 signal intelligence plane, an Il-76 cargo plane, an An-26 transport plane and an An-74 cargo plane were spotted on the images.

On November 10th, SAA artillery and rocket launchers shelled ISIS fortifications in the area of al-Safa. The shelling was reportedly the most violent since the beginning of the army operation in the area two months ago. According to a source deployed on the ground, the shelling is part of ongoing preparations to launch a new ground attack on the terrorist group positions around al-Safa.

Also, an ISIS fighter who was captured by the SAA during the operation to save hostages captured in al-Suwayda revealed that the terrorist group’s cell in al-Safa is receiving direct military support from a US-led coalition base in the border area of al-Tanaf.

On November 9th, Mustafa Bali, the head of the Syrian Democratic Forces (SDF) press center claimed that SDF members and US troops participated in an “airborne operation” to capture a “prominent ISIS leader” in the province of Raqqah. No additional information was provided.

In March 2017, the US-led coalition employed its troops to carry out an airborne assault to capture the Tabqah dam from ISIS while SDF units were approaching the nearby town of Tabqah, the Tabqah airport and the dam itself from several directions. Then, the SDF was also claiming that its fighters were actively participated in the operation. However, in fact, it appeared that most of the work was done by US-led coalition troops.