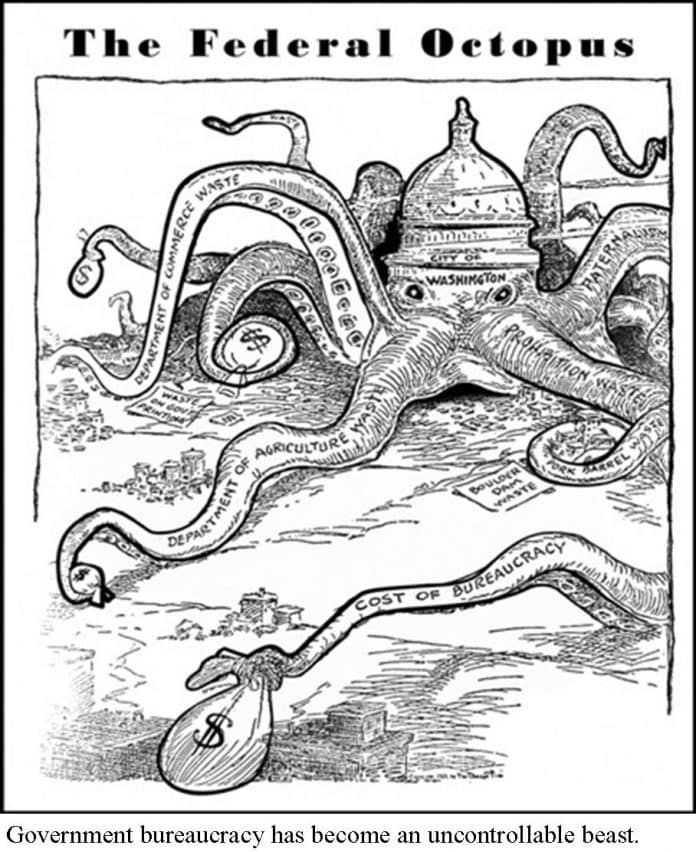 It’s about time the Justice Department starts to take apart the corrupt influences in our political system, the FBI, the security Agencies, and yes, even their own Justice Department. An initial response by some might conclude this is akin to the old adage of “physician heal thyself”, but I believe the majority of Americans, I mean real hardworking, taxpaying Americans, are sick and tired of the Washington political crowd who believe they are above the law, and that the U.S. criminal justice system is only to keep control over those of us they view as subjects.

For those who need a refresher course on the need for such drastic measures against the Washington crowd who for years have taken full control of our lives, liberty, freedom, and now the voting process.  The case has been laid before the public over the last several decades by the actions of our elected politicians, who have so buried their criminal activity in layer after layer of bureaucracy which makes unraveling the mess nearly impossible. Before opening up this can of worms we must to get to the bottom of all the corruption  and wrong doing, so we can throw the bums out or put them in jail . . . preferably both! Because the case against Washington is so extensive it will take several articles to cover all the ground.

To set the stage:

The Hatch Act forbade employees from engaging in many political party activities. For example, they could not run for public office or raise funds for a party or candidate, nor could they become officers in a political organization or be a delegate to a party convention. This was hoped to ensure that the best-qualified people get government jobs and that party politics would not play a big role in that matter. By the mid 1950’s however, Congress had weakened the Act, and today the bureaucrats  are as busy as ever doing whatever it takes to influence political decisions. It is easily recognizable since Donald Trump became president. The bureaucrats have joined in the silent coup d’etat, that was organized by a crime organization headed by Barack Obama, Hillary Clinton, and the country’s security and federal law enforcement agencies under the guise of “the Deep State”.

The infestation of self-serving bureaucrats, from the FBI, the C 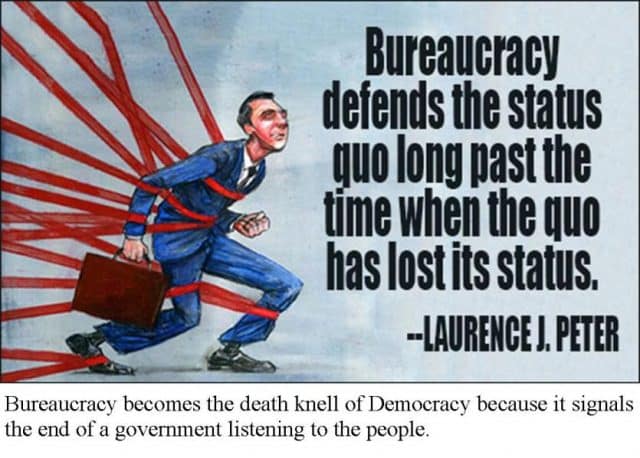 IA, the State Department, the Justice Department, and other security agencies have done everything in their power to overturn the results of the 2016 Presidential elections. We then find they have been aided by the career civil servants who have sabotaged the Trump Administration, with illegal leaks, purposely errant work, and often in total defiance to the duties of their jobs.

The sinister plot by the Deep State involves many of our national security agencies including FBI personnel working with foreign government agencies and spies to plant evidence, lie, and commit seditious acts in an attempt to hinder President Trump in his duly elected duties as President. In short, the last two years we watched as the Mueller Investigation began its witch hunt to frame President Trump for crimes Hillary and the Democrat Party had been secretly engaged in.

Most of the left leaning media together with the Democrat Party henchmen across the country have obviously thrown their allegiance to the Deep State and no longer represent the will of the American people. Accusations abound and are perpetuated by the media to relate any story that surfaces, real or imagined, to be rewritten in “fake news jargon” to create blame for the Trump administration. With the turning around of the U.S. economy, the strongest economy in a half century, the lowest unemployment for Blacks, Hispanics, and women, a surplus of more than 7 million jobs, higher wages, and restoration of U.S. international supremacy,  all the public reads and hears about is how bad Trump is doing and that he should be impeached.

In 93% of the media created stories about the economy, Trump, and the conservative agenda,  are mostly untrue, made-up, were created during a drug induced pipe dream, or a desperate link to “Russian collusion”. Yet in two years with more than 20 FBI agents assigned to the job of investigating Trump (running around like Keystone Cops trying to manufacture evidence), tell us Mueller should be allowed to carry on trying to invent something that shows the Russians enabled Trump to win the 2016 election. Imagine, in two years Mueller’s Team haven’t been able to dig-up enough dirt to allege Trump advisers colluded with Russia to interfere with the presidential campaign.

This bogus and trumped up railroad job by criminals themselves (the FBI and U.S. security personnel, Hillary, Obama, and the Obama administration staff), has cost the U.S. taxpayers  $17 million through May 2018, and a lot more since with still no link to the President.  Mueller did get an indictment against 20 Russian military officers living in of all places, Russia, yet there was no allegation that Trump or any U.S. citizen had anything to do with the charges against the Russians and it had no effect on the presidential election and didn’t change a vote according to Rod Rosenstein.

The indictments focused on hacking DNC servers, and had nothing to do with Trump. For everyone’s information, it was an easy and convenient task to get a U.S. Grand Jury to “get an indictment” of foreign nationals. Remember the old adage that any prosecutor “can indict a ham sandwich” particularly when Mueller and Team knew that the Russians would simply ignore such an indictment, that U.S. had no authority over the Russians, and that there was no way to force appearance in a U.S. courtroom.

Unfortunately Mueller felt the indictments would secure his investigation for a few more years if necessary to keep bilking the U.S. taxpayer out of a huge paycheck or keep a monkey wrench in the gears of the Trump Administration. He was stunned when the attorneys of those indicted showed up to court here in the U.S. to see the evidence against their clients. Embarrassed to say the least, Mueller’s team was caught completely off-guard, their pants down around their ankles,  and then tried to back out of court claiming the indictment was improperly served. Tell me please, what is the status of those indicted and what is the story from Mueller and Rosenstein on this indictment today?

I suppose the tactics of the Democrat Party in trying to overthrow the Trump Presidency shouldn’t surprise anyone who is a student of history, as the Democrat Party has long been associated with corruption, racism, bigotry, along with fomenting terror in the lawless actions of the Ku Klux Klan and the racial hatred displayed in the enforcement of the Jim Crow Laws following Reconstruction following the Civil War. Forget the rule of law and the will of the people, to Democrats it is all about maintaining power. There is nothing new here in the behavior of a major American political party, the Democrats, doing whatever it takes to defy the will of the people and the election process. It was pure headlines then and forgotten by the public now.

The problem they have with Donald Trump being duly elected by the people, is that the public finally has a standard bearer that has more smarts, more business acumen, more common sense, a higher IQ, and the best negotiator the Washington crowd has ever seen in the District of Columbia. They are up against a fighter who will not stand down to media intimidation which includes innuendo, fabrication, lies, disrespect for the Office of the President, nor to threats from members of Congress who can still not get over the fact that he won in 2016. He keeps about ten paces in front of those out to destroy him and enrages them almost as if he is toying with them . . . and the Trump supporters love that it is about time we had a president who doesn’t shy away from a fight. 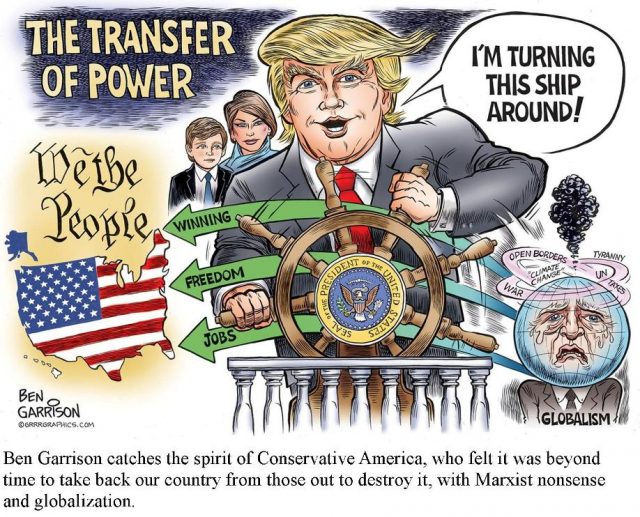 In Part II we will discuss the illegalities of the politicians who swore an oath to defend the U.S. Constitution, and like our great military, to defend the country from all enemies both foreign and domestic.

Please think about these words and whether or not you think our elected leaders are, have been, or never were faithful to this most sacred oath they have sworn to:

“I, ____________,  do solemnly swear (or affirm) that I will support and defend the Constitution of the United States against all enemies, foreign and domestic; that I will bear true faith and allegiance to the same; that I take this obligation freely, without any mental reservation or purpose of evasion, and that I will well and faithfully discharge the duties of the office on which I am about to enter. So help me God.”