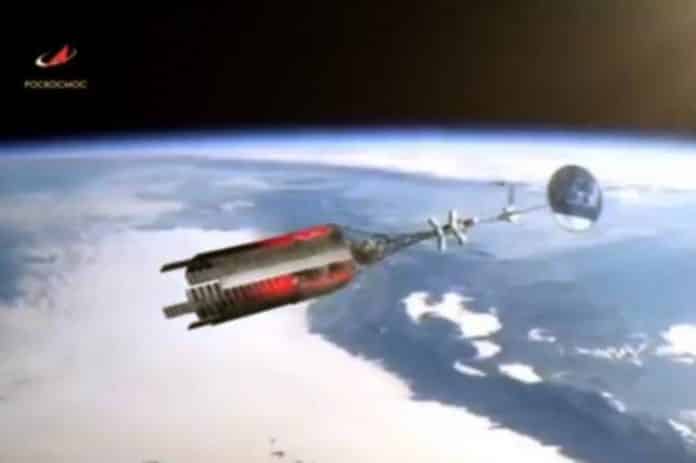 Pravda: Recall that, starting in 2010, a transport and energy module is being created in Russia on the basis of the “megawatt-class nuclear power plant.” In particular, above the nuclear engine itself is building the Center for them. Keldysh and enterprises of the corporation “Rosatom”. The very use of YARD in space is being studied by the Arsenal design bureau.

“Today, the Keldysh Center is working on the development of spacecraft with more powerful engines – nuclear installations of a new class, for which work does not need sunlight and solar batteries,” according to representatives of Roskosmos.

Earlier, the space corporation stated that by 2018 an experimental (real) model of such an installation would be made, which would be intended for interplanetary and long-range (interstellar) flights.

According to media reports, nuclear power in space by Russia and the USSR is not used for the first time – for example, from 1970 to 1988, 32 spacecraft with a thermoelectric nuclear installation were launched. Also, from the 1960s to the 1980s, a real working nuclear rocket engine was tested at the Semipalatinsk test site.

We add that not so long ago, Russian scientists successfully tested the cooling system of this installation – a report on this was officially posted on the public procurement website.

“The principle of operation of the nuclear power plant is that a compact nuclear reactor generates thermal energy, which is converted into electrical energy by means of a turbine. Is it necessary to energize ionic electric rocket engines and equipment @?”

According to the expert, the nuclear power-propulsion system is not dangerous for the environment. A spent reactor can be sent to a “burial orbit,” to which the devices are diverted after failure. Petrov also does not exclude that in tens of years mankind will invent the technology of utilization of the nuclear power plant.

“The creation of compact powerful nuclear reactors and the progress in cooling systems will certainly have a serious positive effect on the development of industry and the Russian economy. These are very popular developments in the energy sector, which should be used in various fields,” said Petrov.

However, so far a nuclear spaceship for manned conquest of deep space is a matter for the future. Despite the fact that both the reactor, and the engine, and the cooling system are ready, for the crew’s survival it must be protected with a lead body several meters thick.

As a result, a ship, even if it is assembled in space and launched on a nuclear rocket there, will be very cumbersome and unnecessarily expensive. However, once a light and durable means of protection against radiation is invented in Russia or not at all to the Earth, it will be possible to create a manned nuclear spacecraft immediately. In the meantime, we can only talk about a spacecraft with a YARD carrying cargo and controlled remotely.

Finally, we note that after the presentation by the President of Russia of cruise missiles from NRE, many experts questioned that Russia has such advanced technology. That’s just their skepticism cooled representatives of the Pentagon and the CIA, who said-Russia really has such technology and such weapons.


Why does Russia need a nuclear white swan