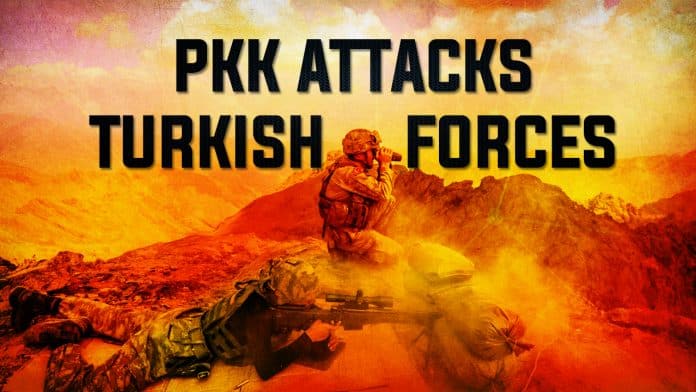 The People’s Defense Forces (HPG), a military wing of the Kurdistan Workers’ Party (PKK), claimed that it had attacked 6 military bases in the southern Turkish provinces of Hakkari and Sirnak on November 9 and November 10. The HPG stated that 17 Turkish soldiers were killed and 32 others were wounded as a result of the attack. 8 soldiers are also missing, according to the HPG.

It should be noted that early on November 10 that the PKK also carried out an attack on several targets inside and south of the capital of Sirnak province with seven armed unmanned aerial vehicles (UAVs). According to Turkish sources, the UAVs failed to reach their targets due to technical failures and possible jamming by the Turkish military.

The province of Sirnak borders both northern Syria and Iraq. An interesting thing is that the recent PKK attacks confirm multiple Turkish statements that Kurdish armed groups operating in these areas, mostly the People’s Protection Units (YPG), pose a direct threat to the Turkish national security.

On November 13, 4 members of YPG-affiliated security forces were killed in the northern Syrian town of Manbij. ISIS claimed responsibility for the attack via its news agency Amaq.

Manbij as well as the YPG-held areas east of the Euphrates River have been repeatedly described by Turkish leadership as a target of the upcoming anti-YPG operation. In late October, the Turkish Armed Forces (TAF) delivered several strikes on YPG positions near the town of Kobani and deployed additional troops and equipment in southern Turksih provinces bordering the YPG-held area.

In November, Saif Abu Bakr, Military Chief of the Turkish-backed militant group Hamza Division, declared that members of his group are ready to participate in a large-scale operation against the YPG east of the Euphrates.

The YPG is the core of the US-backed Syrian Democratic Forces (SDF). The US support to the SDF is the reason of constant tensions between Ankara and Washington. For example, on November 12, Turkish Interior Minister Suleyman Soylu slammed the US “double-faced policy” towards Turkey addressing the continued US support to Kurdish armed groups in northern Syria. He also said that the US receives 20% of the YPG revenue from the oil fields seized in the war-torn country.

If the US continues its political and military support to the YPG and the group will consolidate its power over the Arab areas captured in northeastern Syria setting a foothold for further PKK attacks on targets in southern Turkey, the Ankara-Washington relations will likely deteriorate further.