Project Welcome Home Troops (PWHT) addresses the most pressing issues facing service members and veterans today. It was created in 2006 and has reached thousands of people. The cornerstone of the program is the researched and evidence-based SKY Breathing Meditation, a scientifically backed technique rooted in the yogic science, which is shown to give relief from chronic and traumatic stress.

Yogic science has been shown to improve depression and other health concerns and is a way to re-pattern negative thoughts, emotions, or actions that many of our service members face.  PWHT is one of the largest organizations in the country to partner with VA programs in Palo Alto an various other cities where they are using alternative health programs like SKY breathing in place of medication for those who have been diagnosed with PTSD. 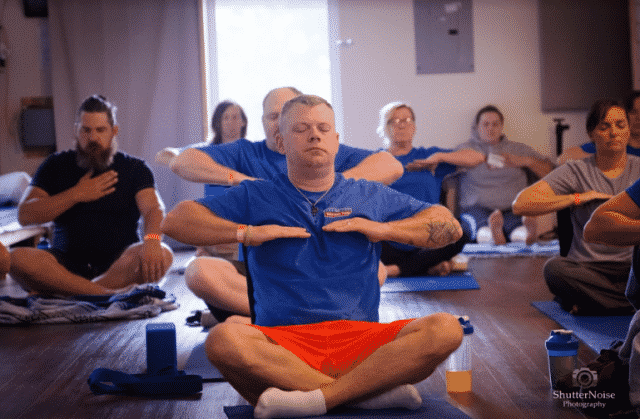 Research shows that the SKY Breathing Meditation, which is the cornerstone of the program, is effective in reducing PTSD symptoms in U.S. combat veterans who served in Iraq, Afghanistan, Vietnam and many other conflict and non-conflict areas. Many veterans have seen positive results using SKY breathing and meditation where traditional treatment options have failed. Strengthening mental, emotional, and social resilience along with building strong bonds with community and family are the key results that veterans are experiencing from the SKY program which are essential for veterans to be able to positively reintegrate back into society after their service time.

Many of those who attended the 2018 retreat program expressed a profound experience during which a clear and powerful path to healing was found and one which did not require medication or drugs. The weekend long retreat included daily yoga, meditation and breathwork classes, along with open discussions on daily learnings. The veterans also learned about Ayurveda and took part in daily hikes and tai chi, and took in a screening of the movie Almost Sunrise. One key highlight was when PWHT brought in Jonathan Starr, a Native American storyteller and veteran who told an important story about the image of the buffalo and how their community treats their own veterans, as an example for all Americans to follow.

“My trip to Boone, NC was right on time as I was slipping back into a depressed mode as a result of my PTSD Symptoms. As North Carolina is my home state (I now live in Los Angeles and have not lived in North Carolina since leaving there in 1990 for Air Force Basic Training) it is ALWAYS refreshing to get back home and breathe the fresh air. And, being that PWHT blessed me with breathing and meditation refresher workshops it’s an added bonus that has rejuvenated and inspired me to get up and out, and enjoy life and all the blessings that are associated with living. I’m very Thankful and appreciative of PWHT and all it does for veterans throughout the country.” stated veteran, Christopher D. Underwood.

“To say the experience at the PWHT reunion workshop in Boone was profound would be an understatement. The coordination and thorough preparation made Boone experience much more an evolution of stress reduction practice, even more, an education unequal of its kind in the present day military stress management. The gathering of like-minded individuals on the PWHT staff presented and guided us through the breathing and meditation and then delivered doctorate level discussions to fully understand why the techniques were significantly reducing stressful symptoms. This value of this orchestration of care givers and teachers, guided meditative instruction, coupled with the camaraderie of service members, veterans, and exemplary staff on top of a beautiful mountain is truly a priceless treasure.” stated Paul Melchior, Colonel, USMC.

Project Welcome Home Troops is a program under the International Association for Human Values, a 501(c)(3), in the USA, was created in 1997 by Sri Sri Ravi Shankar, as a global platform to solve society’s most pressing issues, by uplifting human values.  The Project Welcome Home Troops Workshop addresses the most pressing issues facing service members and veterans today. It was created in 2006 and has reached over 2,100 people. The cornerstone of the program is the researched and evidence-based SKY Breathing Meditation, a scientifically backed technique rooted in the yogic science, which is shown to give relief from chronic and traumatic stress.