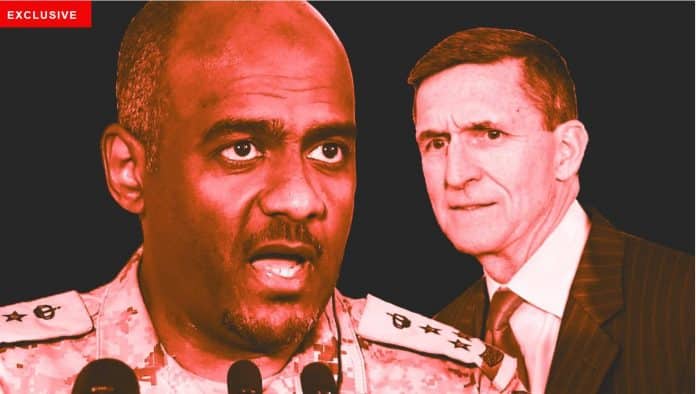 Editor’s note:  VT has claimed, all along, that the Khasoggi murder was done to stop the “after mid-term” Trump/Saudi inquiry, leading to impeachment and prison for Trump family members, maybe all of them.

Now we find that General Ahmed al Assiri was in bed with Trump’s alleged death squad hitman, Mike Flynn, whose gross misconduct in Moscow opened the Russiagate investigation in the first place.

At one time or another while running the Defense Intelligence Agency, Flynn tried to recruit VT’s top editors.  Flynn may be a fool but he isn’t stupid.

By Gerin Banco and Betsy Woodruff for the Daily Beast

Gen. Ahmed al-Assiri, the Saudi intelligence chief taking the fall for the murder of journalist Jamal Khashoggi, hobnobbed in New York with Michael Flynn and other members of the transition team shortly before Trump’s inauguration. The topic of their discussion: regime change in Iran.

Mohammed bin Salman, the powerful Saudi crown prince, dispatched Assiri from Riyadh for the meetings, which took place over the course of two days in early January 2017, according to communications reviewed by The Daily Beast. The January meetings have come under scrutiny by special counsel Robert Mueller’s office as part of his probe into foreign governments’ attempts to gain influence in the Trump campaign and in the White House, an individual familiar with the investigation told The Daily Beast. A spokesperson for Mueller declined to comment.

The New York meetings were attended and brokered by George Nader, a Lebanese-American with close ties to leaders in the United Arab Emirates who is currently cooperating with Mueller’s team. Also present at the meetings was Israeli social media strategist Joel Zamel, who has been questioned by Mueller for his role in pitching top campaign officials on an influence operation to help Trump win the election—overtures that could have broken federal election laws.

Steve Bannon was involved as well in conversations on Iran regime change during those two days in January, according to the communications.