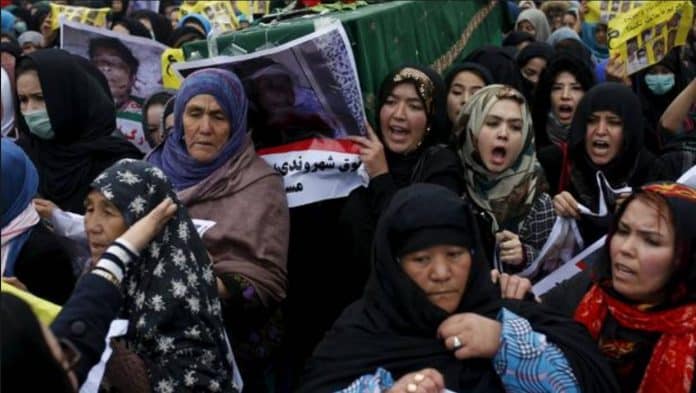 It almost one week that the domestic and international media publish reports on Taliban genocide of Hazara people in Malistan, Jaghori and Khas Uruzgan areas of Afghanistan; and the similar concern is expressed by Western embassies as well as Iranian embassy in Kabul.

During last 17 years, the US and NATO have tested their greatest bombs (MOAB) on areas where the people from Pashtun ethnic were residing in. They were involved in genocide of Pashtuns in Shindad, Uruzgan, Kunduz, Nangarhar’s Hasaka Mena and Kandahar’s Panjwayi. There might not be a Pashtun-reside area where US/NATO forces have not fought in.

International media had published reports on civilian killings by Afghan security forces in Khost and Nanagarhar provinces, and the UNAMA had confirmed the killing; in the case, our Hazara and Tajik brothers were aware of the situation, but no one, including Pashtuns, raised their voice over the innocence and murder of these people neither in Kabul nor in a country abroad.

Kunduz and Farah cities became collapsed by Taliban and, the Taliban were not prevented by Hazara pro-government armed men while assaulting Ghazni City; in the case, there are mostly Tajik and Hazara brothers reside in the city. Moreover, there are allegations that the pro-government armed Hazara men had cooperated with the Taliban to enter the city.

In March 2015, more than 30 Hazara civilians were captured by armed men in Zabul province; however, the Taliban had freed them. It is yet to be witnessed any incident where the Taliban assault on Hazara civilians; and if done, we all the nation harshly condemn it.

Alipoor Hazara is another irresponsible armed commander who conducts discriminative and bad behavior with passengers on Maidan Wardak, Bamyan, Ghorband and Ghor highways. On October 2018, Alipoor became engaged in a firefight against Afghan security forces and, then, spoke about lack of government’s power to detain him while being inside his Hazara people.

If the entire government forces in Malistan district are from Hazara ethnic, it is, in the essence, a wrong, ethnic and discriminative act as we cannot, then, call the Army and Police “National” as a district of the country is controlled by a specific ethnic.

If Iran, US and the West do not call the Taliban fight in Pashtun-reside areas as an anti-Pashtun movement and as they do not reconsider the Taliban fight in Mazar and Takhar against Tajiks and Jawzjan against Uzbeks, so for what purposes the abovementioned foreign communities plea the Taliban assault on Malistan, Jaghori and Khas Uruzgan governmental buildings and military compounds as their war against Hazara ethnic.

While the boys’ schools were remaining closed in Pashtun-reside areas between 2004 and 2009; there were boys’ and girls’ schools operating in Jaghori, Malistan, Khas Uruzgan and entire Hazara-reside areas, it was a discriminative and privileged action of Taliban against Hazara people. Now, as Taliban fight against Hakim Shujae and other Hazara armed men; they, actually, fear of ethnic and religious war by these irresponsible Hazara armed men in future; however, the circles that make negative propaganda about the situation are those who, in recent years, have made huge efforts to have the Sunni-Shia war started in Afghanistan as they did it in Iraq.

Every Afghan is familiar with the name of Fatimyoon Army as it has special armed units in Maidan City. The Army is trained by Iranian generals as Iran wants it to fight against the Islamic State (Daesh) here in Afghanistan. Nowadays, there are reports that Fatimyoon have got to manage and initiate their activities under the umbrella of Hazara irresponsible armed groups in Malistan, Jaghorim, Khas Uruzgan and Maidan localities of Afghanistan.

Meanwhile, it is also said that some Fatimyoon leaders are residing in Kabul where they work for the interests of Iran; and thus, wish to flame the fire of religious war in Afghanistan.

Another concern raised by Afghan politicians is the rumors that the pro-government armed men had a protocol with Taliban in Jaghori and Malistan districts. The Taliban were not encountering any obstacle while moving through these areas, and even, it is said that they were providing the Taliban with projectiles and some light weapons as well as financial assistance,

Now, as the peace talks have got closer, our Hazara brothers wish to have weapon deposits as they are afraid of Civil War and Deash group, and thus want to keep weapons with them and to have the Fatimyoon armed groups operating in their areas.

Our Hazara brothers were not only advocating for the Afghanistan-US Bilateral Security Agreement (BSA), they were also demanding for an extra US military base in Bamyan, other than the 9 agreed bases throughout NUG.

Now, as there are reports on direct talks between US and Taliban and the option of full withdrawal of US forces from Afghanistan is also on the Table; therefore, the pro-US Hazara armed men are intentionally trying to have the Taliban introduced as enemies of Hazara ethnic and thus they might be asking the United States to stay in Afghanistan for a longer time.

Hazara people obtain a lot of benefit from the military presence of US/NATO; and it is because of the US presence that the Afghan Parliament was witness of all 11 Ghazni MPs (members of Parliament) that were belonged to Hazara ethnic in last 8 years; in the case, they try to follow the same trend for the next Parliament as well; however, the vast majority of Ghazni residents are Pashtun. Besides that, a remarkable number of Tajiks are living there, but Hazara ethnic suppresses the right of Ghazni’s Pashtuns, Tajik and other ethnics, and unfortunately, the Human Rights and International Human organization have always snubbed these facts.

Hazara women are also provided with the portion allocated for Pashtun and Tajik women in security bodies (Ministry of Defense, Ministry of Interior and National Directorate of Security); it is a different argument that Pashtun women do not intend to work in the security sector. Meanwhile, Tajik women are also fewer in number than Hazara women. The question is that why Hazara women are intentionally given opportunity to serve in the security sector? Some important positions in the Ministry of Defense have, in contrary to US democracy principles, become exclusive as only women have the right to nominate themselves for those positions.

It is said that the Hazara armed men have recently encroached upon some articles enshrined in protocol between Taliban and Hazara pro-government armed men, and that the Taliban have only assaulted on their public installations.

A similar local-level protocol was also made between Taliban and pro-government armed men in Dand-e Ghori area of Baghalan Province, that was, later, became broken by the government and the fight had eventually took place.

Our Hazar brothers wants to have etching propaganda, so they had plan to close Kabul University to protest inside the University. Pashtun Students were not agree with taht, they want to attend classes, so Hazar students start fight against Pashtun Student, and University is blocked.