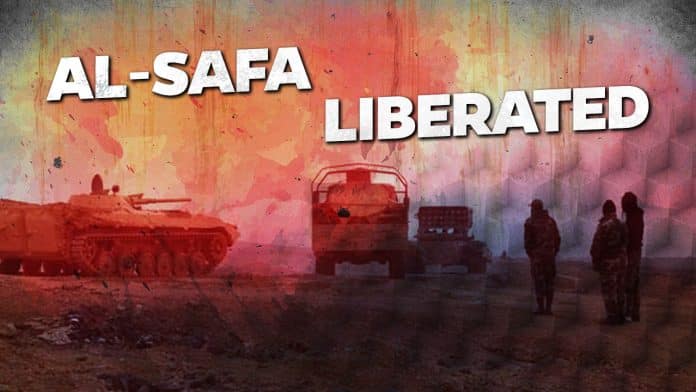 On November 17th, the Syrian Army (SAA) and its allies regained control of al-Safa after the collapse of ISIS defense in the area. An SAA source told SouthFront that heavy rain had destroyed most of the fortifications and hideouts of the terrorist group during the last few days. The remaining terrorists fled towards the eastern Homs desert. The state news agency SANA confirmed that the SAA had made significant gains and that the highest positions in the are under army control.

On the same day, heavy clashes between ISIS militants and the US-backed Syrian Democratic Forces (SDF) broke out around the strategic town of Hajin in the middle of the Euphrates valley. The SDF said that it had killed 20 ISIS terrorists during the attack.

Additionally, pro-government as well as opposition sources reported that US-led coalition airstrikes had killed more than 40 civilians, half of which reportedly children. The US-led coalition increased its aerial strikes in the Euphrates Valley to assist the SDF, which is still unable to deliver a devastating blow to ISIS there.

The Iraqi Popular Mobilization Units (PMU) announced that its units in the western province of al-Anbar struck ISIS fighters in the Syrian town of al-Baghuz al-Fawqani in Syria. Kassem Musleh, commander of the PMU’s operation in the region said that the PMU had reinforced its positions along the Syrian-Iraqi border. The move was a response to the increased ISIS activity in the US sphere of responsibility on the Syrian side of the border.

On November 18th, SANA reported that the SAA foiled another infiltration attempt by opposition members in the northern Hama countryside. The terrorist groups were infiltrating from the direction of al-Bouaida and Ma’ar Keba at the same time. According to SANA, the SAA opened fire and launched bombardments inflicting heavy losses to the militants.

SAA forces shelled militant positions in the towns of al-Tamanah, Aziziya and Jarjnaz in the southern Idlib countryside. Pro-government sources said that it was a response to an attack by Wa Harid al-Muminin militants in northern Lattakia, which left 18 Syrian soldiers dead.

On November 16th, militants from the “Wa Harid al-Muminin” operations room targeted positions of the SAA in the areas of al-Harishah and Mazra’at Waridah in the southwestern Aleppo countryside with an armed drone.

On the same day, the al-Mayadeen TV correspondent in Syria Dima Nasir said that the SAA and its allies are preparing for a limited military operation in Idlib, in response to the repeated violations of the Russian-Turkish deconfliction agreement.

Besides this the situation within the opposition-held area in Idlib also remains unstable. On November 17th, Hay’at Tahrir al-Sham (HTS) militants attacked a headquarters of al-Qaeda affiliated Horas al-Din in the town of Harim in the northern Idlib countryside and clashes with several French militants who were hiding inside it. According to Syrian opposition sources, 5 French militants were killed in the clashes, while 45 more are besieged inside the base.