Health Editor’s Note:  Should we all have our appendixes removed, like prophylactically?  Speaking of having appendixes removed, I had (well still have but he is not so young now) a very young son who said his stomach hurt and it was not the usual hurt.  Me being the R.N. mom that I was, made a diagnosis of probable appendicitis, and immediately took him to his pediatrician’s office, because we had to go there first. You know, jump through the medical world hoops.  We could have gone directly from home to the hospital because of course he was in need of having an appendix removed way earlier than it was removed. The good little boy was very calm as we waited for the surgeon  (chosen by another (stupid doctor father) who was not in the state at the time.”  We waited and waited for the “special surgeon” to be done with whatever he was doing and finally he arrived.  As son was being taken into surgery, his last words to me were, “Mom, remember that I am an organ donor”.  Not necessarily the words a mom needs to hear from her seven-year old son. To make a long story shorter, apparently his appendix ruptured upon being taken out of the abdomen, and good little son several days after the surgery, developed an incisional abscess which created far more problems than the actual surgery. That being said, after digesting this article I hope that my son is going to have a leg up with NOT getting Parkinson’s.  Maybe something really great will come out of his less than good experience at the hands of a “special surgeon.”  Wait, does this mean that we should all have appendectomies?  Going through this surgery would be far preferable to suffering the ravages of Parkinson’s disease later on….Carol

Parkinson’s disease is a brain disorder that leads to shaking, stiffness, and difficulty with walking, balance, and coordination. Symptoms usually begin gradually and get worse over time. Parkinson’s disease results from the loss of the dopamine-producing brain cells that control movement.

Many brain cells of people with Parkinson’s contain Lewy bodies, which are unusual clumps of the protein alpha-synuclein. Clumps of this protein are thought to be toxic to the cells and lead to their death. This protein has also been shown to accumulate in the gut of Parkinson’s patients. There is evidence that the protein may be able to travel from the gut to the brain via the connecting vagal nerve. Gastrointestinal symptoms are often associated with Parkinson’s disease and can start up to 20 years before the symptoms of brain cell degradation.

A team led by Dr. Viviane Labrie at the Van Andel Research Institute sought to explore whether the gut could be involved in triggering Parkinson’s disease. They focused on the appendix. Despite its reputation as a useless organ, the appendix is an immune tissue involved in the body’s defense against microbes and helps regulate bacteria in the intestine.

The team analyzed the records of nearly 1.7 million people whose health information was tracked for up to 52 years. They compared the chances of developing Parkinson’s disease among those who’d had their appendix removed with those who hadn’t. The work was supported in part by NIH’s National Institute on Deafness and other Communication Disorders (NIDCD) and National Institute of Neurological Disorders and Stroke (NINDS). Results appeared on October 31, 2018, in Science Translational Medicine. 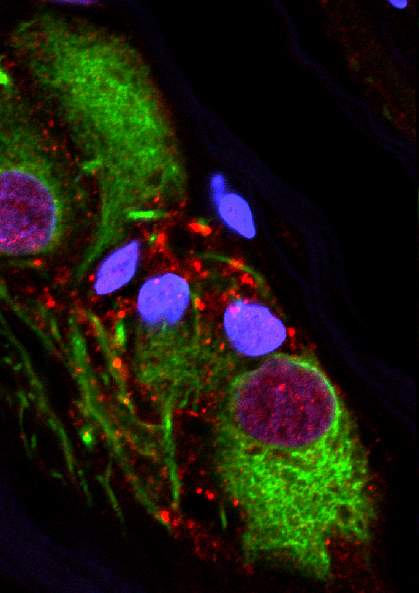 Alpha-synuclein (red) in the neurons of the appendix.Viviane Labrie, Van Andel Research Institute

The team also found a build-up of the toxic form of alpha-synuclein in the appendixes of healthy volunteers. This suggests that the appendix may be a reservoir for the disease-forming protein and may be involved in the development of Parkinson’s disease.

“We were surprised that pathogenic forms of alpha-synuclein were so pervasive in the appendixes of people both with and without Parkinson’s. It appears that these aggregates—although toxic when in the brain—are quite normal when in the appendix. This clearly suggests that their presence alone in the gut cannot be the cause of the disease,” Labrie said.

“Parkinson’s is relatively rare—less than 1% of the population—so there has to be some other mechanism or confluence of events that allows the appendix to affect Parkinson’s risk,” she explains. “That’s what we plan to look at next; which factor or factors tip the scale in favor of Parkinson’s?”