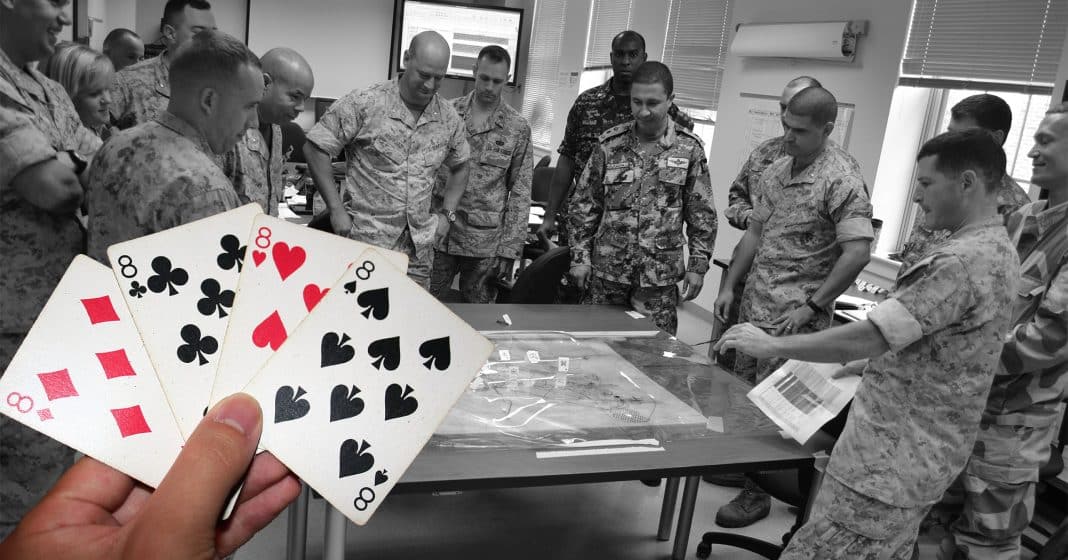 Card games have an enduring appeal, which has not been diminished in this age of digital entertainment. Many of us still love to get together over a game of cards, just as our grandparents did in the days before computers, although the successful move online has ensured that traditional games such as blackjack online remain popular with new generations. For military personnel, card games can have an especially significant meaning, as playing cards with their comrades is a popular way to spend their down-time.

When it comes to being in the military, there are certain events, people and customs that are understood between those who served. It can be hard for these people to express what happened or how they feel about things to those who have not been part of that community.

To that end, there are a number of card games designed specifically with veterans in mind that can help them reminisce with each other or discuss events that have transpired – a pastime very much enjoyed by veterans from all areas of the armed forces.

One such game is Disgruntled Decks. This has a strong military influence and points at the less dark side of the war, allowing veterans to get together and laugh no matter what part of the armed forces they are from. Many people believe that humor is a great way to induce a healing process, particularly for people who may have seen some rather terrible things in their line of work. Disgruntled Decks aims to do just that.

This game is actually set up in the same format as the highly popular Cards Against Humanity and offers a series of war-related scenarios, pointing at the humorous, jocular side of things.

The game is comprised of 90 Mission Cards, one of which the Card Commander will read out to the rest of the group – one per round. The subordinates, otherwise known as the rest of the players, have to place out a grey course of action card (there are 310 of them) with various possible answers to the mission.

As with Cards Against Humanity, the player who asked the question or gave the mission, gets to choose the answer they like best. The game is one by the player who has the most of their answers chosen. Easy!

Another very popular game for veterans is Naval War. This is a card game that requires a fair amount of strategy as well as some luck in order to get through it. Based on the World War II naval battles, each player is given a fleet of ships to control with the aim of sinking everyone else’s.

The card deck is made up of 54 cards and on each card, a specific ship is depicted. Each of them is ships from the original battles and includes prestigious names such as the Bismark, Ark Royal, Prince of Wales, Shokaku and even the enormous Yamato, which still remains the largest battleship to have been used in a naval battle. A second deck, this one made up of 108 cards contains all the weapons that can be used to attack the opposing ships. It includes items such as carrier strikes, torpedoes, and even submarine raids.

Though this game is actually based on historical events, it operates in a quick play format that makes it fun for everyone. In fact, this is a great game for those not in the military as well, affording them some opportunities to learn about what actually went on, a win for both sides.

For those interested in going further with Naval War games, the original has since seen a number of sequels including Modern Naval Battles and also Modern Naval Battles: Global Warfare, both of which bring warfare a little more up-to-date and more relevant to recent veterans and their families.

To conclude these military games, there are a number of games produced under the Lightning name including D-Day, Poland, and South Africa. These games are two-player card options with a 110-card deck. Players take turns to throw out cards building tension as they seek to gain resources and win the war.  This is not a simple game.  Both players must think ahead attempting to utilize their card in the best manner possible.

Of course, there are plenty more military card games out there, but these represent the best, providing a little bit of fun for the veterans and some all-important knowledge for their friends and family.