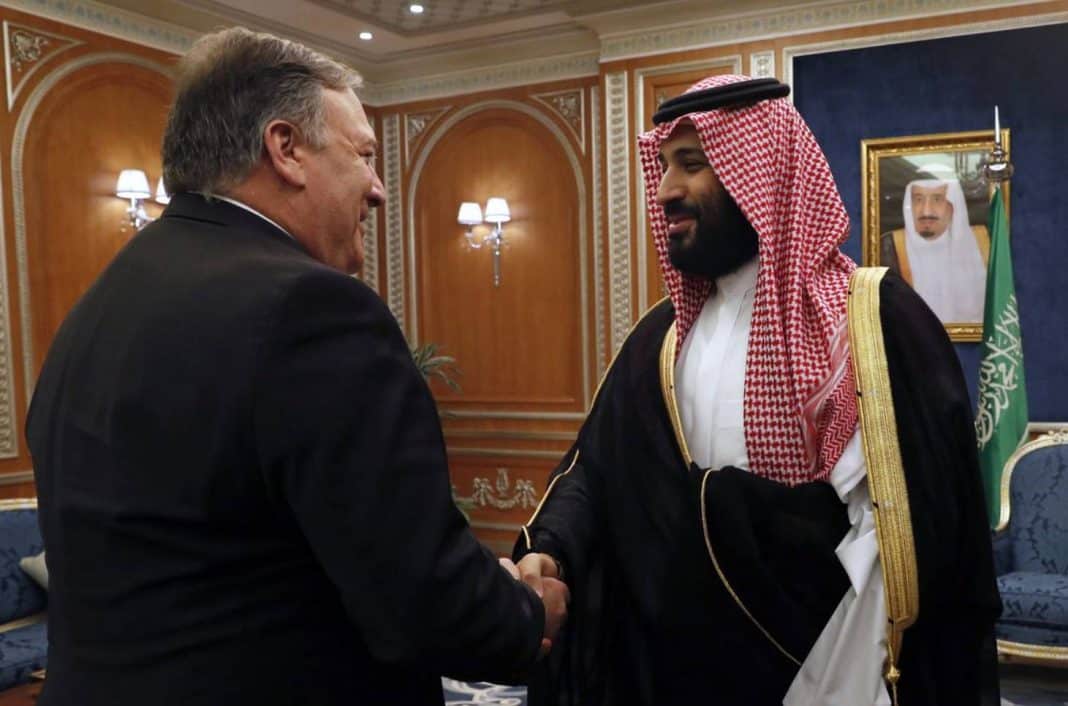 Editor’s note:  VT broke the story initially, landing the murder of Khashoggi on Trump, who sent Kushner and Gina Haspel, using Bolton as intermediary, to order the killing.  MSB was only too happy to oblige.

US secretary of state gave Mohammed bin Salman a roadmap to insulate himself from the scandal, a senior Saudi source tells MEE

Saudi Arabia’s king and crown prince are shielding themselves from the Jamal Khashoggi murder scandal by using a roadmap drawn up by the US secretary of state, a senior Saudi source has told Middle East Eye.

Mike Pompeo delivered the plan in person during a meeting with Saudi King Salman and his son, Crown Prince Mohammed bin Salman, last month in Riyadh, said the source, who is familiar with Pompeo’s talks with the Saudi leaders.

The plan includes an option to pin the Saudi journalist’s murder on an innocent member of the ruling al-Saud family in order to insulate those at the very top, the source told MEE.

That person has not yet been chosen, the source said, and Saudi leaders are reserving the use of that plan in case the pressure on bin Salman, also known as MBS, becomes too much.

“We would not be surprised if that happens,” the source told MEE.

The US State Department denied the Saudi source’s allegations, and called them “a complete misrepresentation of the secretary’s diplomatic mission to Saudi Arabia”.

“We’ve spoken publicly about our goals: to impress upon Saudi leadership the seriousness to which the United States government attaches to a prompt and complete accounting of the murder of Jamal Kashoggi,” State Department spokesperson Heather Nauert told MEE.

According to the source, Pompeo outlined his plan on 16 October, when he jetted over to Riyadh to meet with King Salman and MBS as international scrutiny on the Khashoggi case intensified.

Pompeo’s trip to the Gulf kingdom came exactly two weeks after Khashoggi, a prominent journalist and critic of the crown prince, was murdered inside the Saudi consulate in Istanbul on 2 October.

Just days before Pompeo touched down in Riyadh, MEE reported that Turkish officials had discovered that Khashoggi was killed and dismembered minutes after he entered the consulate to get papers he needed to remarry.

At the time of Pompeo’s trip to Riyadh, top US officials – including US President Donald Trump – had said very little about what happened to Khashoggi, who had been living in self-imposed exile in the US at the time of his disappearance.

Pompeo’s meeting with MBS in Riyadh raised eyebrows, as human rights groups worldwide were urging Washington to demand answers from its allies in Saudi Arabia.

The day after the high-profile meeting, Pompeo told journalists that the Saudis didn’t want to talk about the facts in Khashoggi’s case and neither did he.

“I don’t want to talk about any of the facts,” Pompeo said as he travelled to Turkey. “They didn’t want to either.”

The Saudi source told MEE that Pompeo went to Riyadh to advise the Saudis on how to handle the fallout in the Khashoggi case.

After his meetings, however, Pompeo said he advised the Saudis to conduct a transparent investigation.

“We had direct and candid conversations. I emphasised the importance of conducting a thorough, transparent and timely investigation, and the Saudi leadership pledged to deliver precisely on that,” he said.

“My assessment from these meetings is that there is serious commitment to determine all the facts and ensure accountability, including accountability for Saudi Arabia’s senior leaders or senior officials.”

The Trump administration is expected to make a formal statement on Tuesday about the US’s findings so far in relation to Khashoggi’s murder.

Late last week, the CIA said it had concluded that MBS ordered the journalist’s killing, several US media outlets reported, but Trump has since moved to cast doubt on the US intelligence agency’s findings.

When Pompeo declared on 18 October that Saudi Arabia should be given “a few more days” to complete its investigation into the case, he was giving them time to begin implementing his plan, the source said.

“They [the Saudi leadership] have done everything he wanted to execute,” the source said.

Since Pompeo’s visit to Riyadh, the Saudis have allowed Turkish investigators into their Istanbul consulate, offered to coordinate a joint Saudi-Turkish investigation, sent a team to Istanbul to pursue the probe and arrested at least 21 suspects.

The remaining step – pinning the crime on a member of the royal family – may be taken if the arrests of those Saudi suspects don’t work to ease the pressure on Riyadh, the source said.

Meanwhile, MBS and King Salman have toured Saudi Arabia, made public appearances at a major investor conference in Riyadh, and met with the journalist’s sons.

Both men have been relieved of their jobs. However, according to the Saudi source, they are expected to eventually retake positions of influence in Saudi Arabia.

MEE understands that neither Assiri nor Qahtani are among five Saudi suspects the country’s public prosecutor said would be facing the death penalty if convicted of “ordering and committing” the murder.

Last Thursday, the Saudi prosecutor said the leader of the Saudi team sent to kill Khashoggi in Turkey – widely believed to be MBS’s bodyguard, Maher Abdulaziz Mutrib – made the decision on his own to have Khashoggi killed.

Turkish President Recep Tayyip Erdogan has said the order to kill Khashoggi came from the “highest levels” of the Saudi leadership. However, Erdogan said in a Washington Post column that he does not believe Saudi King Salman was involved in the murder.

The kingdom maintains that MBS had no knowledge of the assassination plot and the subsequent attempt to cover it up, however.