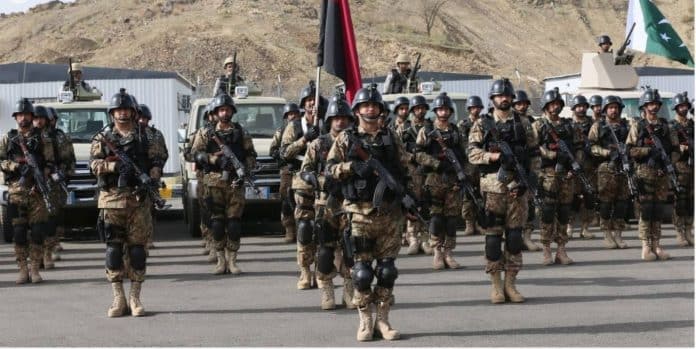 In the past four decades no country in the world has survived more turbulent and destabilising environments than Pakistan. The amazing facts are that during this time, Pakistan waded off multi directional offensives and grew stronger and stable: politically, economically and militarily.

The past fifteen years in particular were a relentless assault forcing Pakistan to fight wars on multiple reverse fronts. Pakistan successfully waded through alligator infested waters, shrunk the swamp, went for the kill and moved proudly into the third round of uninterrupted democracy. The next logical step is diplomacy and development.

Societally, the country is much more integrated, inclusive and tolerant. Certainly far more inclusive and tolerant than neighboring India where Hindu hardliners are seeping into every sinew of society. Corruption, the major scourge of the system and foreign sponsored economic manipulation is in the last throes of death. That Pakistan is up, running and rocking is not an understatement.

Look at it from any perspective, the end statement does not change.

Recent conflict history is replete where ‘Dogs of War’ have destroyed societies, countries and people in Africa, Asia and Latin America. Pakistan with far worse circumstances is an exception.

Middle East is in turmoil. Yemen, a hornet’s nest and at war imposed by multinational intrigues has become a land of human misery and starvation within three years. Yet such misery is neither visible in Pakistan nor Afghanistan. This proves another point. Pakistan and Afghanistan are societally, religiously and culturally the same construct.

Cambodia, a neutral country in a spinoff of Vietnam War got destroyed. In comparison, Pakistan first warded off the far more intense Soviet invasion for ten years and later withstood the US imposed ‘Shock and Awe’ and terrorism for fifteen years. Rather than crack at fault lines, all fibers of national power have stranded into more robust unity.

What is most remarkable is that despite a four decade conflict in Afghanistan, unrest in Kashmir, an aggressive India, a hot and cold Iran, waves of terrorism in terrain that supported insurgencies, a hotbed of international intelligence, covert operations, and international sanctions, Pakistan held its own and prevented the Afghan people suffer the fate of malnourished Cambodians and Yemenis. Pakistan has remained the bread basket of Afghanistan and provided shelter and employment to over 4 million Afghan refugees over a prolonged period. Afghan lives have certainly been lost to violence but not to hunger and starvation. Symbolically, Pakistan made Afghanistan a cricketing power house.

Come to think of it. Isn’t this a spectacular feat?

After the tragedy of 1971, Pakistan has grown stronger after every conflict. The Kashmir independence movement has grown in momentum. Handfuls of secessionists exist only in imagination. The theory of a destabilised Afghanistan to destroy Pakistan has failed. Balkanisation maps have become a figment of imagination. Even President Trump’s offensive tweets have a positive effect, galvanise people and bond the country. Most importantly, despite an apparent polarised political environment, the parliament of Pakistan is unanimous on national security.

Unfortunately, strategic research in the world too often falls to biases and wishes of a dominating international order. Free thinkers are seldom heard or acknowledged. Yet sometimes the truth despite visible efforts at appeasement to the international order oozes out. One such evaluation comes from an article ‘Battered but still afloat’ written by Anatol Lieven. Though he did identify the inherent rallying points of a robust Pakistani society to bounce back, he drifted away from the facts in later parts of his essay, to keep his thesis of ‘Pakistan: A Hard Country’ alive. He writes,

“I have always been struck by the contrast between the dramatic and often violent character of Pakistan’s public life and the relative resilience and stability of Pakistani society. This resilience is the central reason why crises that would have sunk other states have left Pakistan battered, but still afloat. It is striking that several Arab states that once looked much richer and stronger than Pakistan have collapsed completely, whereas Pakistan, in its own messy and infuriating way, continues to trundle along. And if Pakistan could survive the combination of US pressure and Islamist insurgency of the past decade, and defeat that insurgency, then there are good grounds to be confident that Pakistan will go on surviving for quite a long time to come.”

Though some of his conclusions in later part of his essay proved wrong, reality floats on the surface.

The realization of realities has reluctantly surfaced through independent strategists like Anatol Lieven and Bruce Riedel. It is as much an admission of Pakistan’s robustness as failure of US policies in Afghanistan and region.

Contrary to Lieven’s assessment, Imran Khan is now the prime minister of Pakistan. He took reigns of a tattered and battered battle field under siege by a vicious debt trap created over decades by home grown factors supported by the international financial system. Pakistan has won this battle.

It is a foregone conclusion that Pakistan has waded out of most crises within few months. Saudi Arabia, UAE, and Malaysia have become solid partners. Chinese remain Pakistan’s most dependable ally. Relations with Iran have improved and shall grow despite US sanctions. Pakistan is poised to play a constructive role in ending Saudi-Iranian hostilities and end to the Yemen Conflict.

Pakistan is already playing a role in sustaining the human resource in Afghanistan. Its role in bringing peace to Afghanistan cannot be undermined at the cost of Pakistan’s security. Nothing won in this hard fought battlefield is to be compromised in diplomacy. It is only Pakistan that can provide a face-saving to US failures in Afghanistan.

Domestically, the system is slowly being restored and rebooted. Given the speed of events, Pakistan will override the initial hiccups and return to economic indices it merits and deserves.

This factor is well understood by Pakistan’s political and military establishment. Pakistan’s parliament is in unison. Pakistan’s military diplomacy is playing a vital part in building strong allies that shall form the springboard for socio-economic development. At the same time, military has reiterated its centrality to development without any desire for political power.

Pakistan’s next challenge is to consolidate its inherent strengths into an institutionalised mechanism. The ‘never admit defeat’ trait of the Pakistani nation led by Imran Khan provides motivation for the evolution of a Systems Approach that will in due course become a force multiplier.

Two events yesterday in Karachi and Orakzai Agency are the last of popcorns. Swift elimination through FC and Police means Pakistan is fighting fit.

Given two years, Pakistan will be closer to the elusive summit.