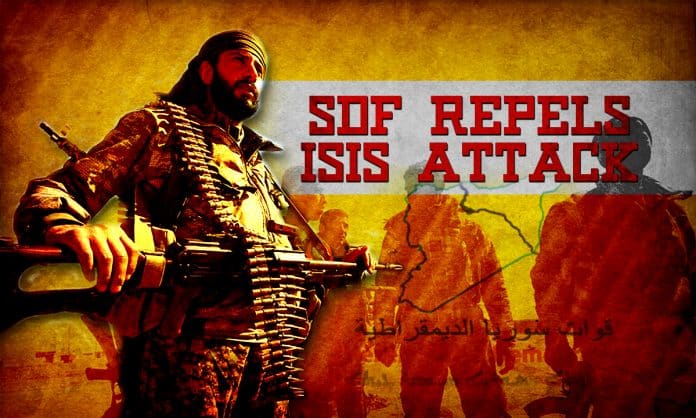 On November 22, ISIS advanced on positions of the US-backed Syrian Democratic Forces (SDF) around the al-Tanak oil field in the province of Deir Ezzor. According to reports, the ISIS advance started with an attack by two suicide vehicle-borne improvised explosive devices. Then, ISIS infantry attacked SDF positions penetrating the first line of the group’s defense. However, SDF members supported by US-led coalition aircraft repelled the advance.

According to pro-Kurdish sources, up to 10 ISIS members were killed and at least one VBIED was destroyed in the clashes.

On the same day, Russian Foreign Ministry Spokeswoman Maria Zakharova pointed out that the US is still training militants in the al-Tanf area.

“Under the excuse of fighting against the ISIS and in order to contain Iran, a big US military base was set up there – in a strategically important area adjacent to the borders of Syria, Iraq and Jordan, which is close to the highway connecting Baghdad and Damascus. And there, according to numerous witness accounts, militant training is underway,” she stated during a press briefing.

Syrian and Russian officials have repeatedly accused the US of creating a safe haven for ISIS in al-Tanf. Pro-Syria experts say that the US is using ISIS and other militant groups there as a tool to prevent the Damascus government from restoring a full control of the border and to contain the growing Iranian influence.

Local sources say that some former members of FSA groups, which reconciled with Damascus, are now involved in a wide range of criminal activities, including weapons trafficking. The government is not going to tolerate this.

The Aerospace Force of the Islamic Revolutionary Guard Corps has released a video of multiple drone strikes on ISIS positions in Syria and Iraq in the period from 2014 to 2017. The strikes were carried by Shahed-129 unmanned combat aerial vehicles, which are the only and main offensive air component used by Iran. The video shows the underreported side of the ongoing conflict.