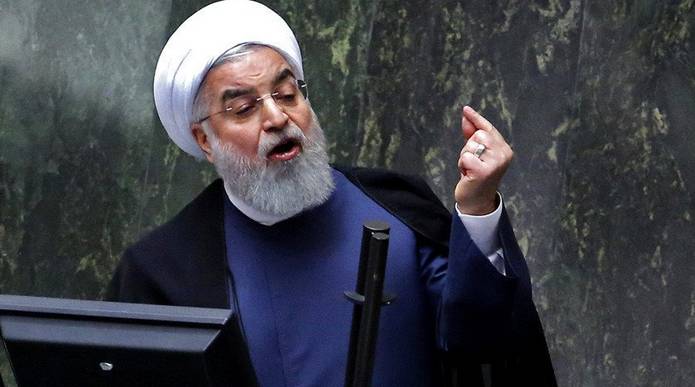 Darius Shahtahmasebi is a New Zealand-based legal and political analyst, currently specializing in immigration, refugee and humanitarian law.
Russia Today:
Washington’s rhetoric regarding Iran paints the picture of an evil nation hellbent on destroying the world. In reality, it appears that Tehran would prefer dialogue with its rivals, which is unacceptable to the US.

Tuesday’s White House Statement from President Trump on “Standing with Saudi Arabia” was an outright condemnation of Iran and a total free pass for Saudi Arabia.

Iran is to blame for almost every issue in the Middle East, including the war in Yemen, according to the statement. The US-made and supplied bombs raining down on Yemeni school buses, with some 85,000 children dying in the process, is simply because of Iran. Not only is Iran responsible for the bloodshed in Yemen, Tehran has further helped “dictator Bashar Assad” in Syria kill “millions of his own citizens.” The official death toll of the Syrian war is under one million, and certainly the various jihadist groups, including Islamic State (IS), share responsibility for that figure.

“The Iranians” have also killed many Americans and other innocent people throughout the Middle East. Iran not only shouts “Death to America” and “Death to Israel” but it is also considered “the world’s leading sponsor of terror.”

It is curious enough that firstly, in a statement about Saudi Arabia, the term “world’s leading sponsor of terror” is not gifted to the prime sponsors of Al-Qaeda and IS. Secondly, the fact that Trump himself put that term in inverted commas seems to suggest that even he doesn’t quite believe that one to be true.

Remember, Saudi Arabia is the country that Trump, before becoming president, once accused of masterminding the 9/11 attacks. I wasn’t aware of this until reading the statement, but according to the White House, Saudi Arabia would gladly withdraw from Yemen if the Iranians would agree to leave. That’s right, Iran’s non-presence in Yemen must be removed in order for Saudi Arabia to cease blowing up children, hospitals, factories, food trucks, schools, agricultural land, strategic ports, and relinquish its complete stranglehold over the country.

If you were naive enough to take the White House statement at face value, you would surely think that Iran has much to answer for. Iran is, after all, public enemy number one and has been for some time. Conversely, Saudi Arabia has been a longstanding ally of the United States, a faithfully serving client state, and it should be protected at all costs especially if there is to be any hope at pushing back against Iran as it yells “Death to America” and “Death to Israel.”

But what if Iran was, despite all of its flaws, not interested in fighting a war with Saudi Arabia? What if we dug a little bit deeper and asked ourselves: is there another way of dealing with the “threat” that Iran poses?

In January this year, Iran’s Foreign Minister Mohammad Javad Zarif wrote an article that was published in the Financial Times which laid out the country’s proposed framework for bringing stability to the Middle East. The article was widely ignored by the rest of the world, even though its implications were potentially life-saving.

“The objective of a strong region — as opposed to a quest for hegemony and the exclusion of other actors — is rooted in recognising the need to respect the interest of all stakeholders,” Zarif wrote. “Any domineering effort by one country is not only inappropriate but essentially impossible: those who insist on following that path create instability. The arms race in our region is an instance of this kind of destructive rivalry: siphoning vital resources into the coffers of arms manufacturers has contributed nothing to achieving peace and security. Militarism has only served to fuel disastrous adventurism.”

Zarif states that the usual modes of forming alliances have become “obsolete” and suggests that security networking to address issues is a much better practice. He proposes that instead of ignoring conflicts of interests, the countries in the region should accept their differences.

“The rules of this new order are straightforward: common standards, most significantly the purposes and principles of the UN Charter, such as sovereign equality of states; refraining from the threat or use of force; peaceful resolution of conflicts; respect for the territorial integrity of states; non-intervention in the domestic affairs of states; and respect for self-determination within states,” Zarif adds.

Zarif recommends opening up dialogue and blames a “dialogue deficit” for instability throughout the region. Such a dialogue, he argues, could help other nations understand that all parties have “similar concerns, fears, aspirations and hopes.” His eventual vision is that these countries will eventually adopt a “non-aggression pact.”

Now, Zarif did not explicitly state who he was talking about in this proposed path to peace and stability. But what if his intention was to work with Saudi Arabia, is this not something that should be talked about, particularly by the US commander-in-chief when releasing statements stoking the fire of an already volatile region while pitting two major regional players against each other?

In October last year, Zarif was quoted as saying that Tehran is willing and ready for rapprochement with the Kingdom of Saudi Arabia, adding that he does not believe the two countries should have the type of relationship they have right now.

In December last year, Iran’s president Hassan Rouhani further intimated that Tehran is willing to resume ties with Saudi Arabia if it halted its military campaign in Yemen and severed its ties with Israel.

“We don’t have any problem with the country that is our neighbor and unfortunately speaks a lot and speaks irrationally. Saudi Arabia, as our neighbor, should stop bombing Yemen from tomorrow, stop bowing to Israel, stand straight and rely on its nation,” Rouhani said.

In March this year, Zarif then took his ambiguous article one step further and openly said that Iran is willing to resolve its differences with Saudi Arabia’s as part of Tehran’s desire for stability in the region. As Zarif notes, this is not the first time Iran has reached out to the kingdom, yet the Saudis continue to reject Iran’s proposed dialogue.

In August of this year, Zarif further stated that Iran wants to restore relations with Saudi Arabia as well as the United Arab Emirates (UAE) and Bahrain. Surprisingly, Saudi Arabia had just allowed the entry of an Iranian diplomat to head Iran’s interests in the Kingdom, a rare move since diplomatic ties had been cut almost two years prior.

Just last month, Zarif again called for Saudi Arabia’s cooperation to push back against the “repeated insults” made by the US president at the time.

“This is the reward of the illusion that security could be achieved through external support,” Zarif said. “We extend our hands to our neighbours, saying: let’s build a strong region to stop this arrogant pride.”

I could be wrong, but in its totality, it does appear that Iran is proposing a framework where Middle Eastern countries settle their disputes between themselves without outside interference, whereby the US would be left out completely. Such a suggestion is in itself a form of hubris so unacceptable to Washington that the proposal itself makes the country ripe for a targeted regime change operation. Despite this, Iran has been quite open about its blueprint for a new outlook to the Middle East.

“We don’t need foreigners to guarantee the security of our region,” Iran’s president said earlier this year.

“When it comes to regional security arrangements, we are ready to talk to our neighbours and friends, without the presence of foreigners,” he added. “We are, have been and always will be good neighbours.” Yes – even Saudi Arabia. 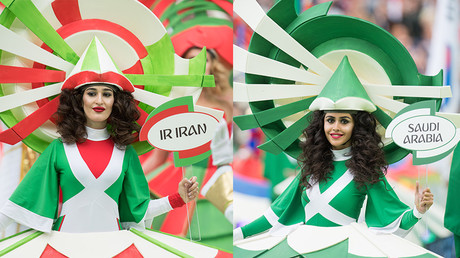 Iranian-Saudi detente could transform the region, and US power is there to prevent

In August, UN experts went even further and said that Iran might be willing to play a “constructive role” in ending the war in Yemen, something Iran has said it has been wanting to do for years by working with Saudi Arabia.

Conversely, the Saudis and their US counterparts are not so willing to take the Iranians up on their offer.The Saudis always want to “fight the Iranians to the last American,”according to former Secretary of Defence Robert Gates. The Saudis have even openly abandoned the Palestinian cause in an attempt to cosy up to Israel and create a US-backed alliance that can confront Iran in the region. The Saudi Crown Prince also compared Iran’s supreme leader to Adolf Hitler, a brazen statement for a man who executes journalists and unarmed children with complete impunity. The kingdom continues to openly work with Al-Qaeda linked groups to prolong the fighting in Yemen, all because its anti-Iran hysteria cannot falter from its position.

A détente between Riyadh and Tehran appears to be a far cry away from happening any time soon, but we cannot continue to pretend we haven’t noticed the opportunity that continues to present itself, particularly from the Iranian side. Whether an Iran-Saudi relationship is a positive step or a disastrous one is an important question to ask; but we should at least consider it as an option if it can avoid a potential and unnecessary war between two regional powers, as well as its potential to diffuse an already devastating war which continues to kill thousands of people completely needlessly.