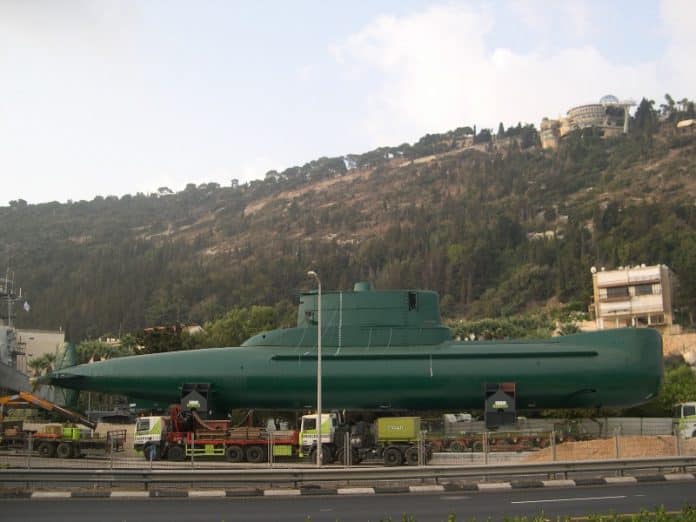 [ Editor’s Note: This was a strange story to see pop up out of nowhere, so one has to ask the proverbial question, “Why now?” And for that I come up blank – other than maybe the outside chance that the captain of this sub recently died and cannot be interviewed.

Heaven only knows that the Zios have a closet full of murder horrors they have committed for which the truth door remains nailed shut. But it was the use of the term “within his operational orders” that triggered me publishing this on VT.

And here is the reason why. Let us wonder if some other country’s submarine commander had sunk a boat of Jewish refugees because he though Jewish terrorists were escaping – like the Irgun for example – which even included some future Israeli presidents who were Irgun members.

Do you not think a great howl would arise from the global Jewish community, which I doubt will happen here? I will try to find more background in the Israeli news on how this got published and to see if it has had a ripple effect inside Israel, other than possibly among the Left at Gush Shalom.

But I felt those whose lives were snuffed out that day and hidden away under the Zionist blanket of, “Oh well, doo doo happens sometimes”, deserved a little more than the “within operational orders” moral dodge. Maybe a monument should be built in the victims’ honor with their names inscribed, along with the Israeli captain’s name and the wonderful “within operational orders” quote.

Maybe then we could get a dialogue going as to the feasibility that all the Holocaust monuments should have such a quote put on them. After all, the record has been public that the Allied bomber command in Britain once fretted about the mental health of its air crews over the huge number of civilians being killed in the big city raids.

A palliative notice was sent out to them all, absolving them from any personal responsibility on the dubious grounds that, due to the civilian support for the Nazi regime that was prolonging the war and thus causing more deaths, the mass slaughter of civilians in large cities would make them turn on the Nazi regime to end the war sooner and thus save lives. Left out of the missive was any mention of the one third of the German population that had voted for the Kaiser.

I am not kidding. The high command is on the record for this and of course, not one in a million persons know about it today. I bumped into the historical data by chance while I was reading some history.

Will this get much play in the corporate media? I doubt it, but I sure hope I am wrong.

Note there are no key words to search for to find this article – not the name of the sub, its captain, not even the name of the ship sunk. This is a little game for publishing the story, while making sure that it quickly becomes as buried online as the original story did. Gosh, who would want to do something like that? … Jim W. Dean ]

“…within his operational orders.”

Israel has officially admitted that its military ordered a deadly attack on a Lebanese ship carrying refugees during the regime’s invasion of the country more than three decades ago.

An Israeli submarine fired missiles at the refugee ship in northern Lebanon in the summer of 1982, killing 25 refugees and foreign workers on board, the Israeli Channel 10 reported on Thursday, after the regime lifted a 36-year-old gag order on the incident.

The report said that the commercial ship, carrying dozens of Lebanese refugees to Cyprus, apparently tried to take advantage of a brief ceasefire and flee the area.

But an Israeli Navy Gal-type submarine, which was following the ship for about an hour after leaving Tripoli, said the report, had fired torpedoes at the boat and killed the refugees and foreign workers.

It alleged that the submarine’s captain, identified as Maj. A, had mistakenly ordered the attack because he was convinced that the ship was carrying Palestinian fighters.

Ten years later, Israel said it had launched an investigation into the incident. The probe, however, ruled that the captain had made a mistake, but that he was within his operational orders.

The Palestinians and the Lebanese never realized that the boat was sunk by the Israelis.

The Israeli regime has waged three wars on Lebanon — in 1982, 2000, and 2006. It has also carried out assassinations in the Lebanese territory.

The Lebanese resistance movement, Hezbollah, which was founded in the 1980s following the Israeli invasion and occupation of southern Lebanon, has since helped the army defend Lebanon both in the face of foreign aggression, including in the 2000 and 2006 wars, and against terrorism.

Lebanon and Israel are technically at war due to the latter’s occupation of the country’s Shebaa Farms since 1967.

Thanks Israel: Iran to Introduce 1,000 More Centrifuges at Natanz Nuclear...