At least 46 people, including 8 children have been hospitalized in Aleppo with symptoms of gas poisoning from chlorine, according to the Russian military who sent special units to assist with treating patients after the attack. Syrian media say over 100 people were injured. The shelling that targeted residential areas of Aleppo on Saturday night is believed to have been launched from within the Idlib de-escalation zone, from an area controlled by the former Al-Nusra front. 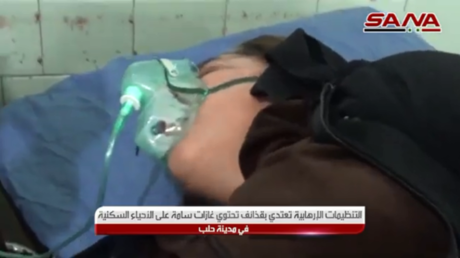 Damascus said the attack aimed to further frame the Syrian government, according to Sana news agency. The Syrian Foreign Ministry called on the UN Security Council to immediately condemn the “terrorist crimes,” and take “deterrent and punitive measures against the states and regimes backing terrorism.”

The statement stopped short to name any particular “sponsors,” but said the attack occurred as the result of “facilitation” provided by “some countries” to deliver chemicals to armed militants.

The attack was an attempt to damage the Syrian normalization process, according to Russian Foreign Ministry spokesperson Maria Zakharova. She added that the shelling of Aleppo must be condemned by the international community, which has been silent of the incident so far.

“If terrorists are left alone for more time I think they will only continue such attacks, which I think makes it more and more imperative to go ahead as soon as possible to eliminate these terrorists,” Rizk told the channel.

Speaking of what terrorists can achieve by such actions, the analyst said that they want to show that the war is not over and boost morale among militants, as well as scare off Syrian refugees who fled the country from returning back home.

Previous alleged chemical weapons attack in the city of Douma in April, for which the West was quick to pin the blame on Damascus, was used as a pretext for US-UK-French missile strikes against Syria. Russia has repeatedly stressed that the incident was staged and warned that terrorist groups are plotting to carry out more false flag chemical attacks in the Arab Republic.

Syrian media reported on Saturday that militants based north of Aleppo bombarded the city with chlorine-filled shells, causing over a hundred people to be delivered to hospitals with symptoms typical for poisoning such as suffocation.

Russia’s Defence Ministry confirmed that Russian jets hit the targets of terorrists who had reportedly shelled Aleppo with deadly chlorine gas on Saturday.

According to the ministry, intelligence services identified in the Idlib de-escalation zone the fire weapons that were used in the Aleppo gas attack. They also found that the terrorists were preparing for another poisonous shelling. All the targets were destroyed; Turkey was warned about the strikes in advance via a hotline. 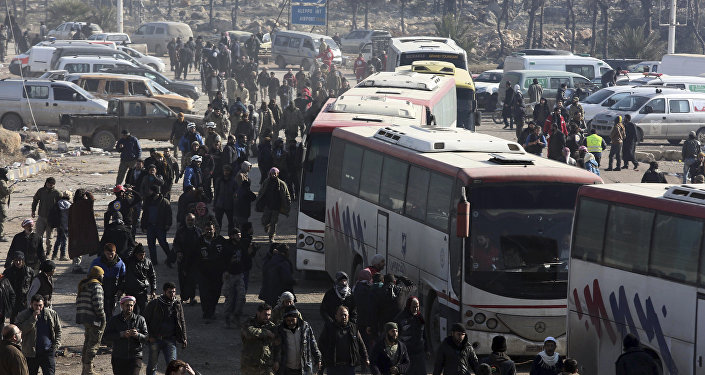 Earlier in the day, Damascus accused unnamed western countriesof supplying weapons to armed terror groups so that they could stage false flag chemical attacks and then blame them on the government. Syria also urged the UN to take “punitive measures” against the countries that were supporting the Aleppo attackers.

Russia’s Foreign Ministry, in turn, described the Aleppo shelling as an “attempt to damage the Syrian normalisation process”, adding that it should be “unconditionally condemned” by the entire international community.

Syria’s state-run news agency SANA reported on Saturday that neighorhoods of Aleppo had been bombarded with chlorine-loaded shells, poisoning at least 107 people.