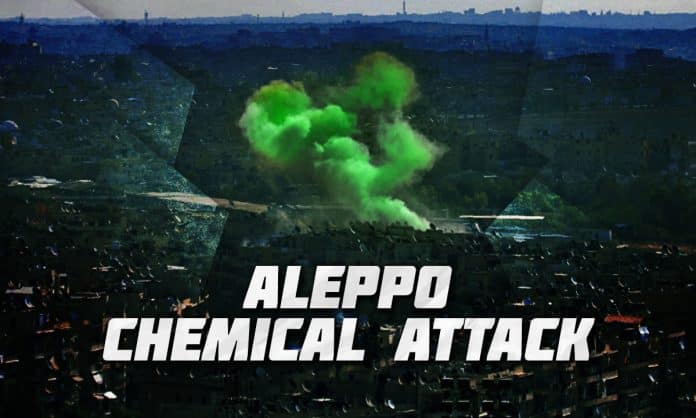 In the late hours of November 24th militants launched several rockets containing chlorine gas at residential areas in the northern part of Aleppo city, according to Syrian Arab News Agency (SANA). 107 civilians reportedly suffered asphyxiation, including many women and children.

These attacks came a few days after SANA reported that French militants arrived in Idlib to equip shells and rockets of local groups with toxic gas. They entered the country through the border with Turkey.

In its first response to the chemical attack, the SAA shelled several positions of the militants in the western Aleppo countryside and the southeastern Idlib countryside. It is possible that the chemical attack may become the tipping point which, would force the Syrian Arab Army (SAA) to kick off a military operation in the area.

Furthermore, a Hay’at Tahrir al-Sham unit attempted to attack several SAA positions in northern Hama from the direction of al-Lataminah. However, the SAA repelled the infiltration attempt.

Earlier Syrian and Lebanese sources reported the SAA and its allies are preparing to launch a large-scale military operation against the remaining militants in northwestern Syria. before the end of 2018. Considering the recent escalation, this development has become highly likely.

The Syrian Democratic Forces (SDF) also continue their allegedly successful efforts against ISIS in Deir Ezzor province. On November 23rd, the US-backed group announced that it had repelled ISIS attacks on their positions around the town of Hajin in the Euphrates Valley. US-led coalition warplanes assisted in the repelling and carried out 10 airstrikes on positions, gatherings and vehicles. The SDF media center claimed 27 terrorists were killed.

On November 24th, ISIS Amaq news agency reported that ISIS militants launched attacks on the SDF between the towns of al-Susah and Hajin. An ISIS commander said that hat more than 32 SDF fighters were killed and many others were captured, a Humvee and loads of weapons were also seized. Syrian outlets reported that ISIS fighters had imposed control of large parts of the town of al-Bahrah during the attack. Despite that, the SDF media center continues to report that all is under control and pretend that the situation around Hajin is in its favor.