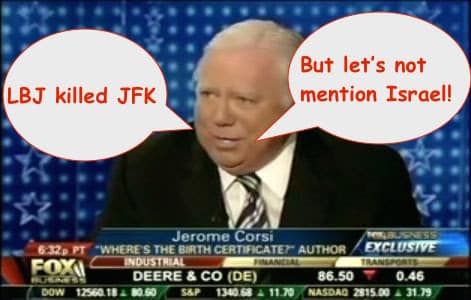 Senior Editor’s Note:  It has always been my “opinion,” after consulting with my friends which include active serving heads of half a dozen national intelligence agencies, that Julian Assange is an Israeli asset.  As for Corsi, this is not a brilliant guy, nor is Roger Stone.

These are the guys that people admire,? They certainly don’t get “the girl” or whatever it is, and kissing up to right wing assholes, continually on “private hunts,” is a total waste of time.

These were the kids we didn’t play with, the snitches and whiners.  Washington is filled with little else.  They tend to be drawn to military academies as well.

I get invited to all this crap, have for decades, have gone from time to time, and would rather put my hand in a food processor than sit at a table with the ass kisser brigade that call themselves “conservatives.”

As we get older, I am 70, I look at what their lives have brought them.  They move like turtles, half dead, wasted away, sad and freakish caricatures of the petty crooks they once were.

Their life memories, groping a 10 year old Mexican kid at a hunting lodge specifically 11 miles north of the border, south of Waco or one of half a dozen others, two in Colorado.  (one with a water park)  Chris Kyle (“American Sniper”) was whacked at one of these for opening his mouth one time too many and being disrespectful to people he found to be human vermin.

First broadcast in November 2014…before I read Laurent Guyénot’s From Yahweh to Zion and was fully convinced that Israel was the driving force behind the JFK assassination. Since Corsi is back in the news, I thought I’d pull this one up from the archives.

First hour: Bestselling author Jerome Corsi, Harvard poli sci Ph.D., is obviously a smart guy. While I don’t agree with him on everything – just most things – he seems to have gotten the JFK assassination right.  Corsi’s new book Who Really Killed Kennedy?  names the key high perps, including LBJ, Allen Dulles and his CIA proteges. And it names the motives: Revenge for the Bay of Pigs, coronation of psychopath LBJ, and opposition to JFK’s “peace offensive” including the planned withdrawal from Vietnam. Corsi is also well-known for swift-boating John Kerry, asking good questions about Obama’s biography, exposing the New World Order, and pushing 9/11 truth into the New York Times.

Second hour: University of Minnesota Professor James Fetzer is one of the world’s leading experts on the JFK assassination. In this interview Jim takes up where Jerome Corsi left off, describing the latest JFK research that was aired at the 51st anniversary conference in Dallas last week.