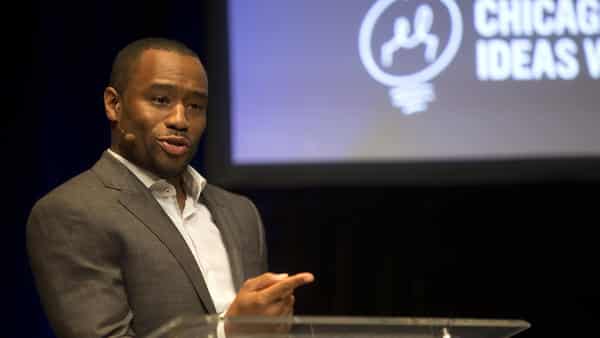 Dr. Marc Lemont Hill, the recently fired CNN contributor should be glad and happy he is alive and escaped a lynching by angry Israel-First mobs and escaped the Hollywood-sponsored IDF firing squad.

No one in America dares to criticize Israel who hopes to survive in a job or profession. Anyone who ever doubts the toxic power and influence Israel has over US media, politics, academic and financial institutions should think twice. Criticizing Israel and its military and settlers’ occupation is not a crime, nor is anti-Semitism. Those who think so have a mental problem.

The immediate dismissal of Marc Lemont Hill by CNN comes after he made a statement at the UN in which he called for a free Palestine from sea to river, which to the sensitive Zionist forces in the US is deemed racist and anti-Semitic rhetoric which calls for Israel’s destruction.

No one in CNN or other major networks wants to hear any calls for justice for Israelis and for Palestinians. Marc Lemont Hill’s message was “a call for justice, both in Israel and for the West Bank/Gaza.”

What in blazes is so wrong and offensive to Zionist America in those words? Nothing.

Though I did search and review some of the posts on who’s who in American media, I chose not mention it here, leaving it to the readers to do their own search to see that the mainstream media is a powerful tool for Israel-Firsters.

The last time I checked First Amendment cases, even hate speech is a protected speech. In a unanimous vote of the US Supreme Court in the case of Matal v Tam, no hate speech is exception except as “such speech is directed to inciting imminent lawless action”. Marc Lemont Hill’s statement certainly does not come close to hate speech and certainly did not create any immanent lawless action. However, CNN and major media in the US including the US Congress are rewriting the First Amendment by passing laws that make criticism of Israel a felony punishable by fine and imprisonment.

Leading the charge for such legislation is none other than the leading liberal Senate Democratic Leader, Chuck Schumer, an Israel-Firster who is using his position to erode freedom of speech, association and assembly, which are basic rights of the American people, in favor of his love and first loyalty, Israel.

With so much power and influence over America, the Israeli lobby and Zionist money machines have made major inroad in state politics, managing to get many states to rewrite freedom to choose “boycotting” Israel a felony, and denying any company or business or individuals that support the BDS (boycott of illegally and criminal Israeli settlements) from doing business with the state.

Now let us compare boycotting armed, illegal trespassing settlements on stolen Palestinian properties and boycotting the Israeli Military Occupation versus the outrage over North Carolina’s decision on the use of “gender neutral toilets”.

Fifty blankety-blank years of armed settler occupation, over 550 humiliating security checkpoints which millions of Palestinians must face going through every day as they are processed like cattle. Fifty years of arbitrary arrest and administrative imprisonment for months and years without trial or public evidence, while over one million Palestinians have been “guests” of Israeli military jails. There have been tens of thousands of home demolitions under the pretense that the homes were “built without permits”, as Palestinians would have to wait for decades to get a home-building or remodeling license. But criminally trespassing settlers can simply seize Palestinian lands and build; they can raid towns and villages; desecrate churches and mosques. They can even set young teenage Palestinians on fire by forcing them to drink gasoline and then setting them on fire.

Mr. Schumer and many American liberal hypocrites are upset about North Carolina’s toilet issue, but not bothered or offended about 50 years of military occupation by Israel.

There are too many cases of professors losing their jobs because they criticize Israel and support Palestinian rights for a free state, with many rich donors putting pressure on leading academic institutions to make sure pro-Palestinian professors have no place or tenure, and that pro-Palestinian groups can not exercise their freedom of speech and assembly on college campuses. Otherwise, accusations of terrorism and anti-Semitism fly all over the place. The anti-Palestinian groups are fully funded by rich and powerful American Zionist Jews. Even the State of Israel sponsors and pays for its agents on college campuses.

Let us remember the words of Voltaire – “to learn who rules over you, simply find out who you are not allowed to criticize”. I think the case is clear. Israel rules.

PS. Recently Hollywood stars held a benefit dinner for the IDF, raising $33 million in one night. Of course these “stars” never did sponsor such a benefit for the American GI’s USO. They simply have their loyalty with the IDF, but not the American soldiers.