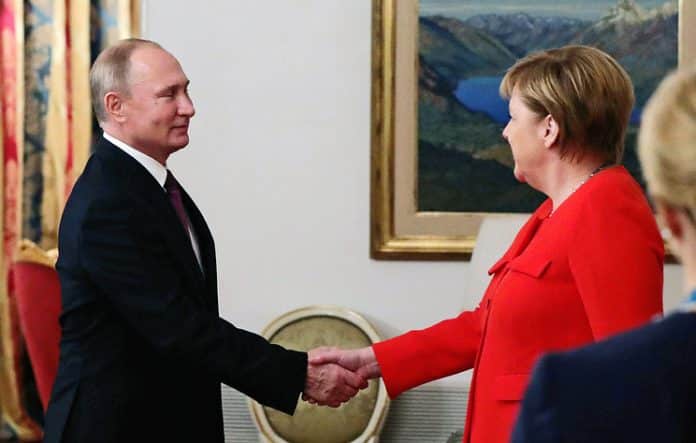 German Chancellor Angela Merkel and Russian President Vladimir Putin have discussed the situation in Syria, the Kerch Strait incident and the situation in the Sea of Azov on the sidelines of the G20 summit, German Government Spokesperson Steffen Seibert informed on Twitter on Saturday.

The German chancellor and the Russian leader had a working breakfast. “The focus was on the situation in Syria, as well as the situation that arose between Russia and Ukraine in the Kerch Strait and in the Sea of Azov,” Seibert noted.

The German government spokesperson also posted a photograph of Merkel and Putin shaking hands before the beginning of the meeting.

On November 27, Ukraine’s parliament, the Verkhovna Rada, endorsed President Pyotr Poroshenko’s decree on imposing a 30-day martial law from November 28 in the Vinnitsa, Lugansk, Nikolayevsk, Odessa, Sumy, Kharkov, Chernigov, Donetsk, Zaporozhye and Kherson regions, as well as Ukraine’s territorial waters in the Sea of Azov. Initially, Poroshenko sought to impose martial law for 60 days, but this put into question holding the March presidential election and sparked a public outcry.

The pretext for the decision to declare martial law was an incident in the Kerch Strait on November 25, when three Ukrainian warships, en route from Odessa to Mariupol, illegally crossed Russia’s state border, entered Russia’s territorial waters and started performing dangerous maneuvers.

Despite the repeated warnings and demands to stop, the Ukrainian vessels continued their way, forcing Russia to use weapons. All three Ukrainian ships were detained in the Black Sea. Three Ukrainian servicemen were wounded and received medical assistance. Their lives are currently not under threat. A criminal case has been launched over the violation of Russia’s state border. Moscow slammed the incident as a provocation.