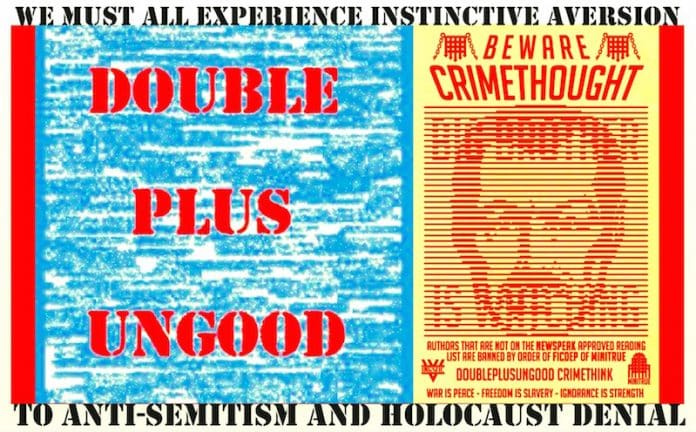 Kevin and I have very different views on religion.  Simply put, it is the Torah itself that describes the Jewish people as a nation of psychopaths with a g-d that is not just vengeful but unsound and childish.  It is the Jewish people who need the new bible, the Talmud is a thousand times worse.

As for the Christian bible, one might well look at the works of the Council of Nicaea and the works of Saint Jerome.  By my view, Christianity is a fake religion invented at a pagan conclave to overthrow something with real merit.

Were one to look at Christ and Islam, I suggest buying Mark Siljander’s book, A Deadly Misunderstanding or one of his others.  It is Judaism that maligns Christ as either a deity or prophet, as in Islam, and does so with insanity, malice and tastelessness.

Then again, it is easy to make a case for Judaism as a fake religion when a real student of history notes how much is fabricated and borrowed, the flood, the fake exodus from Egypt where there is no evidence whatsoever, the broken timelines, the fabricated Jewish kingdom that, through 95% of its existence was a minor province of Egypt, Babylon or Rome.

Ah, but what do I know.g

Our Orwellian era just took a terrifying turn for the worse. Not content with mangling the English language to disguise victimizers (themselves) as victims, and their victims as “terrorists,” the chutzpah-bloated chosenites of the Zionist Power Establishments (ZIPES!) are demanding that the sacred scriptures of Islam and Christianity be rewritten to their own liking:

According to ZIPES, the Gospels and the Qur’an are…what else…hotbeds of anti-Semitism! The mind fairly boggles at the obscene hypocrisy of people whose scriptures condone lying and stealing, claim that prophets pimp their wives and screw their daughters, insist that Mary was a whore and that her bastard son the lying false prophet Jesus is boiling for eternity in a vat of human excrement, and repeatedly call for and celebrate genocidal exterminations of the chosenites’ supposed enemies (including people whose only crime is to inhabit the chosenites’ alleged “promised land”) have a problem with other people’s scriptures.

Let’s do some remedial Religious Studies 101 and compare the scriptures of Abrahamic monotheism. The first thing we notice is that Islam and Christianity are universal, ethical, and spiritual—while Judaism is tribal, often unethical, and overwhelmingly anti-spiritual. No wonder authentic scripture is “anti-Semitic”!

According to Christianity and Islam there is only one God, the universal creator. All human beings, regardless of ethnicity or ancestry, are basically equal before the one and only God, the God of all peoples and all beings, the God of everything.

Judaism, by contrast, revolves around a tribal god named Yahweh, who often seems a stand-in for the Jewish tribal elite. In the earlier sections of the Torah (Old Testament) Yahweh is just one tribal god among many. Gradually he seems to merge with (usurp the place of?) the one and only universal God; yet he still is tribal enough to preposterously hold that Jews are a genetically superior master race, a “chosen people.” This absurd, blasphemously demonic, narcissistic scam—”our tribal god is the God of everyone”—continues today under the rubric of Jewish Superiority and the chosenness complex. The Rothschilds foisted it onto tens of millions of gullible evangelical Christians by paying a two-bit swindler named Cyrus P. Scofield to lend his name to the Zionist “Scofield Bible” published by Oxford University Press and promoted with all the fanfare the Rothchilds’ fortune could muster; today the Scofield Bible is used by/on the brainwashed Protestant-fundamentalist legions who regularly vote for Bibi Netnayahu’s “chosen” candidates.

The Gospels and Qur’an are rigorously ethical. The Gospels sometimes carry ethics to a self-effacing extreme, insisting on loving thy enemy and turning the other cheek; while the Qur’an insists that all of life is God’s test to see who among us can best persist in holding rigorously to the truth and working to our utmost capacity for justice.

The Jewish Torah and Talmud, by contrast, repeatedly condone or even celebrate unethical behavior.  Consider sexual ethics: Abraham pimping his wife-sister Sarah, Noah being sodomized by his son (Babylonian Talmud Sanhedrin 70a), Lot fornicating with his daughters, Judah with his daughter-in-law, Amnon raping his sister, Absalom seducing his father David’s wives…all of this and more makes it clear that by the standards of Jewish scripture, Woody Allen’s “keep it in the family” act is actually quite tame—as Woody’s rabbi, perhaps a frequenter of New Yorks pedophilia-infested Jewish “child rape assembly line” bathhouses, presumably assures him. The Talmud’s claims that “intercourse with a boy under nine years old is not considered a significant sexual act” and “not sodomy” (i.e. not a problem) presumably has something to do with what goes on in those NYC bathhouses. (Michael Hoffman, Judaism’s Strange Gods, p. 358…since Hoffman’s books are now banned on Amazon check out his bookstore.)

The Torah, and even more so the Talmud, carry unethical precepts far beyond the sexual arena. The Torah suggest that God/Yahweh approves of Jacob (“the heel”) swindling his brother Esau out of his birthright—a “morality” tale with real-world implications, since in subsequent Jewish lore Jacob represents the clever Jew and Esau the stupid, hairy goy.

The Torah-given notion of Jews as “chosen people” also fosters bad ethics. Apart from the numerous God-approved scriptural genocides (including Esther whoring her way to the slaughter of 75,000 Persian men, women and children, which Jews still celebrate every Purim) there is the small matter of the Talmudic Halacha teaching as indisputable gospel that “the Judaic male is supreme above the gentile and that ‘the world was created for the Jewish nation.'” (Michael Hoffman, Judaism’s Strange Gods, p.98).

The Gospels and Qur’an agree that the most important dimension of human life is the spiritual dimension: we are not merely our material bodies, our souls or spirits survive death; and what we do in life (notably our moral/ethical behavior) determines how we will experience the afterlife. In this, the scriptures of universal monotheism agree with many other great traditions, including Hinduism and Buddhism; The Tibetan Book of the Dead, for example, is an instruction manual to help a dying person through the process of leaving the material world and entering the spiritual one, where failure to overcome greed, lust, and egotism while alive can lead the dying person to experience “eternal hell” once dead.

The Torah and Talmud, by contrast, are relentlessly unspiritual, even antispiritual. As Laurent Guyénot writes in From Yahweh to Zion (p.95):

The Hebrew Bible does not grant man any form of afterlife worthy of the name: man is dust and returns to dust (Genesis 3:19). “My spirit cannot be indefinitely responsible for human beings, who are only flesh” (Genesis 6:3). Yahweh has nothing to do with the dead “whom you remember no more, cut off as they are from your protection” (Psalms 88:5). Genesis 2:7 plays on the semantic link between man, adam, and earth, adamah : “Elohim shaped adam, dust of adamah.”

“The materialism inherent in Judaism has profound consequences in Jewish mentality. Among these consequences, Karl Marx identifies the immoderate pursuit of financial power: ‘Money is the jealous god of Israel, in face of which no other god may exist. Money degrades all the gods of man—and turns them into commodities.'(Karl Marx, On the Jewish Question) By their perfection of usury, which has now resulted in the transformation of money into debt and its complete dematerialization, Jews have somehow endowed money with a virtually supernatural power. It is as if the spiritual world in which the Jew does not believe has been replaced by a spiritual world of his own making: a spiritualization of matter that is actually an inverted spiritual world, since instead of linking man to heaven, it chains him to earth.” (From Yahweh to Zion, p.113)

Christianity and Islam seek the salvation of the individual soul in the next world. In both traditions, that salvation is attained through faith (heart knowledge) and good works. For Judaism, in stark contrast, the only salvation is in this world, and it consists of money and (Jewish tribal) progeny: The only immortality is the Tribe’s. Guyénot writes: “The Hebrew Bible binds the individual to his collective racial origin rather than to his personal spiritual destiny. The immortality that is denied the individual is reinvested entirely on the collective: only the people is eternal.” (From Yahweh to Zion, p.114)

The “eternal” people’s materialistic, ethically-challenged, anti-spiritual pursuit of tribal wealth and power is a 2500 year old intergenerational project. Orchestrated by a self-replenishing eugenically-created tribal elite (smart poor boys marry rich men’s daughters)  who ruthlessly manipulate non-elite Jews as well as goyim, the project has succeeded spectacularly and may be, as Islamic scholar Imran Hosein argues, arriving at world domination via a pax Judaica that replaced the former pax Americana on September 11, 2001.

All religion, René Girard argues, is rooted in the ubiquity of scapegoating and human sacrifice. And just as Christianity revolves around the sacred story of the scapegoating and sacrifice of Christ, the new religion of Pax Judaica revolves around sacred stories of two monstrous human sacrifices: the Holocaust and 9/11. In both sacred stories, the demonized villain just happens to be the Jews’ enemy du jour: Hitler in the 1930s and 40s, Arabs and Muslims a few generations later.

Questioning the official sacred stories of the two great Judeocentric human sacrifice events (the Holocaust and 9/11) can ruin your career…and, in the case of the Holocaust, get you sentenced to maximum security prison. Here is my friend Monika Schaefer, recently released from almost a year in maximum-security lockup for the crime of producing a tender and moving video about her relationship with her mother.

The upshot of all of this is that today’s Pax Judaica dominated world is far beyond Orwell’s craziest nightmare. So if you want to stay out of trouble, you’d better pre-emptively apologize for even thinking any thoughts related to anything you just read.

And if the ADL or JDL or any other DL comes after you, you’d better get down on your knees and recite the following words of repentance: