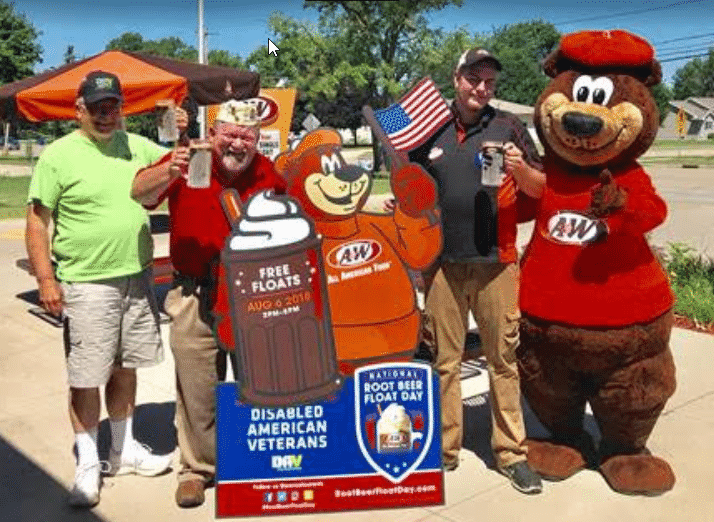 For the sixth year, A&W Restaurants gave away its famous Root Beer Floats as a way to say “thank you” to guests and to raise money for veterans. A&W maintains a special connection with vets, since its first Root Beer was served nearly 100 years ago during a parade for World War I military members.

A&W celebrates its centennial just a year before DAV. DAV has been dedicated to a single purpose: empowering veterans to lead high-quality lives with respect and dignity. While much has changed throughout the nation since DAV’s founding in 1920, the charity’s commitment to the men and women who served and sacrificed has never wavered. Last year, DAV helped over a million veterans and their families across the country.

“A&W’s continued generosity to support America’s heroes and DAV has made a big impact,” said DAV CEO Marc Burgess. “With the help of A&W Restaurants, DAV is able to create more victories for veterans, helping all veterans and their families gain access to healthcare, disability, financial, housing and education benefits they earned through their service to our country.”

Since it started to celebrate National Root Beer Float Day, A&W has raised more than $800,000 for veterans groups.

Celebrating its 100th anniversary in 2019, A&W Restaurants ranks #4 on Time Magazine’s 2018 list of America’s best fast-food chains. It still makes Root Beer fresh in each restaurant from real cane sugar, water and a proprietary blend of herbs, bark, spices and berries that are served in a frosty mug alongside burgers, fries, chicken tenders and other All American Food® favorites. There are nearly 1,000 locations worldwide.

DAV empowers veterans to lead high-quality lives with respect and dignity. It is dedicated to a single purpose: fulfilling our promises to the men and women who served. DAV does this by ensuring that veterans and their families can access the full range of benefits available to them; fighting for the interests of America’s injured heroes on Capitol Hill; providing employment resources to veterans and their families and educating the public about the great sacrifices and needs of veterans transitioning back to civilian life. DAV, a non-profit organization with more than 1 million members, was founded in 1920 and chartered by the U.S. Congress in 1932. Learn more at www.dav.org.