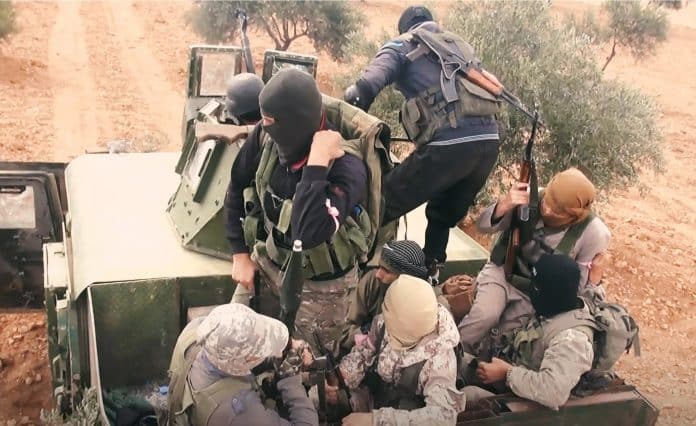 [ Editor’s Note: Major battles will usually begin with either a feint or a real move to seize a strategic position that will be key to the battle. This HTS (the renamed al-Qaeda) preparation to secure complete control over the Aleppo road looks like the real deal, as it will live or die on its ability to maneuver in the coming battle.

But it is also a dangerous gamble because it requires concentrating forces for the attack, which in this day and age with total air surveillance via everything Russia has, this can be spotted and air strikes called in at the key moment where such a force can be crippled and eliminated at the beginning of the battle. The next move would be an counter attack.

What is up in the air still is how ruthlessly will HTS use the civilian population as human shields, and by that I mean even blowing them up in towns they hold so they can quickly get media coverage on “Damascus atrocities”.

The Syrian coalition has been carefully preparing for this battle to minimize casualties, but if Idlib’s towns are turned into rubble that will not be a victory its inhabitants will celebrate. If HTS loses, it wants to do as much political damage to Assad’s image as possible to undermine the peace process.

But as I published on December 01, the Syrian opposition is fully on-board with the need to end the terrorists’ control over NE Syria. It has the peace process at a stand still while the US is using the time to set up a defacto Kurdish State in the Deir Ezzor-Iraqi border area, where it may remain as its permanent protector.

The US has gotten away with this so far, militarily and politically, because world attention has been focused on so many other places and controversies, with corporate media a key and dependable tool being used in the process.

The US means to destabilize Syria any way that it can to hold its US-Israeli-Gulf State anti-Iran coalition together to make Assad’s victory a Pyrrhic one … Jim W. Dean ]

Hay’at Tahrir al-Sham (HTS) [the former branch of al-Qaeda in Syria] is preparing to launch an attack on the city of Maarrat al-Nu’man, the last stronghold of the Free Syrian Army (FSA) in the southern Idlib countryside.

According to the Syrian news outlet Enab Baladi, the radical group wants to seal its control of the key highway linking the governorates of Aleppo and Hama.

“HTS wants to complete its control of the international highway by focusing on the city of Maarrat al-Nu’man, which is the only area on the highway that’s out of its control,” an unnamed source in the FSA told Enab Baladi on December 2.

According to the source, HTS is massing its forces around Maarrat al-Nu’man. In response to this move, the Turkish-backed National Front for Liberation (NFL) deployed more troops inside the strategic city.

“According to the NFL’s own experience, HTS’ movements indicate that it is preparing to launch an attack,” Enab Baladi quoted Mohamad Adib, a member of the NFL media office, as saying.

HTS’ plans to impose control of Aleppo-Hama highway is likely another attempt to sabotage the Russian-Turkish demilitarized zone agreement. Under the agreement, which was reached on September 17, the highway should be reopened with protection from Turkey, Russia and Iran.

More on this topic: