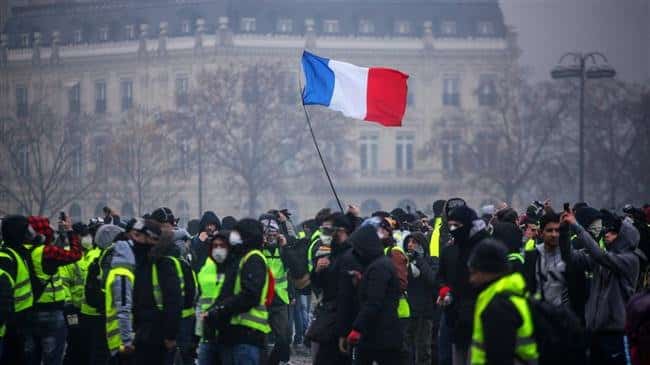 [ Editor’s Note: Macron powwows with the French political elite and wisely decides to back down from his horrible mistake of trying to impose a green tax on an economically struggling population.

The whole political establishment realized it was looking down a double-barrel revolution when mass protests with no real leadership behind them exploded onto French streets. The French elites will now back off and let the infighting between the various protesting segments implode upon itself.

This is the usual tactic used for generations of European elites who are quite savvy at avoiding the encouragement of lynch mobs camping out on their doorsteps. They will promise whatever is needed to back them off, and only deliver 10%, and let them fight over the scraps.

They will then infiltrate the various groups to try to get their leaderships under control, and yes, using government security organizations to do it under the umbrella of it being a “national security” threat.

The US military did this during the Vietnam War protests, having its agents, “go back to college” and join these groups to profile the leaders, all highly illegal; and to my knowledge no one was ever prosecuted for what were clearly illegal actions by our military.

Europe itself breathed a sigh of relief, as the protests had already begun to spread to Belgium. Now we will see if the protesters can get their act together politically.

And last, where was the National Front during all of this? Does it exist any more? And what an irony to have Macron caught lecturing the Saudi Crown Prince at the G-20 over “not listening”, and then bin Salam getting to see Macron’s feet put to the fire by protesters accusing his government of “not listening”. You just can’t make this stuff up… Jim W. Dean ]

The French government has reportedly decided to suspend planned fuel tax hikes in a bid to end two weeks of violent protests in the country over the matter.

Prime Minister Edouard Philippe is preparing to announce the suspension, which will be accompanied by other government moves intended to calm the protesters, AFP reported on Tuesday, citing “government sources.”

According to the sources, President Emmanuel Macron decided to suspend the 2019 fuel tax increases late on Monday after his administration members spent the day negotiating with leaders from all political parties.

Philippe, the report added, will announce the fuel tax suspension later on Tuesday after holding talks with legislators in his Republic on the Move Party.

The French prime minister will not, however, meet with a delegation of the “yellow vests” out of “security” concerns, after several of them said they had received death threats by angry protesters challenging their claims of representing the grassroots movement, according to Philippe’s office.

The suspension of the fuel tax hike was among the key demands listed by the “yellow vest” leaders, in addition to a higher minimum wage and the restoration of a wealth tax on the rich, which was abolished last year.

The intense protest events, which degenerated into street clashes and vandalism throughout Paris over the weekend, broke out last month over the fuel taxes aimed at financing France’s anti-pollution measures.

The massive protests were initially triggered by the rising cost of fuel this year, and rapidly expanded into a wider revolt against government policies, which stands accused of pursuing policies that primarily impact low-income households in the European nation.

‘Income inequality getting worse across Europe’

A French professor of political economy, Jack Rasmus, told Press TV that income inequality is on the rise in France.

“Income inequality is getting worse, and Europe looks like it is heading to another recession,” Rasmus said. “Germany is already contracting.”

Pointing to a slowing economic growth across Europe, Rasmus said, “People haven’t recovered from the last crisis. They are getting squeezed. This is just not workers and collective bargaining, but small businesses.”

Many influential figures in France have reportedly been pressing Macron to alleviate the popular anger after witnessing the urban battles in the country’s capital on Saturday, when dozens of automobiles were burned and businesses attacked and looted.

Meanwhile, a new survey showed the approval ratings of Macron and Philippe falling to a new low amid the protests.

The French president’s approval rating dropped to only 23 percent in the poll conducted late last week by Ifop-Fiducial, down six points compared to a similar poll last month.

The survey, which was published Tuesday by Paris Match magazine and Sud Radio, also showed Philippe’s rating declining by 10 points, standing at 26 percent.

Macron’s latest rating matches the low standing by his predecessor Francois Hollande in late 2013, according to Paris Match. Hollande at the time was considered to be the least popular French leader in the nation’s modern history.