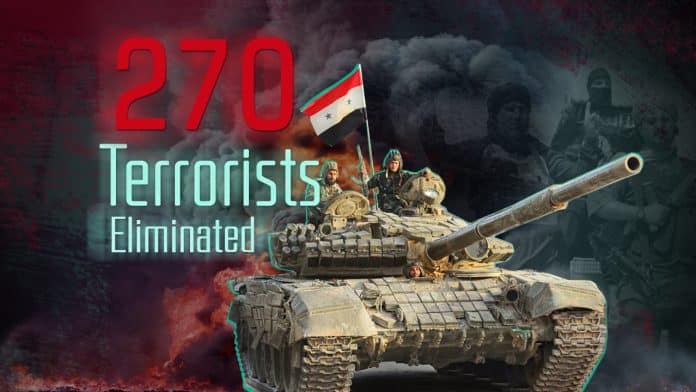 Government forces have eliminated more than 270 ISIS members as well as seized a large amount of weapons and munition, including 12 TOW anti-tank guided missiles, in the province of al-Suwayda since middle November, Oleg Makarevich, a spokesman for the command of the Russian task force in Syria, announced on December 3.

“The terrorists had been there for a long time, flocking to the area for several months. Among them were militants who were able to leave Yarmouk and Damascus in advance and also arrived from al-Tanf. Another difficulty was that tanks and heavy artillery have very limited maneuverability there, while the militants had many grenade launchers, anti-tank missiles and 82mm mortars,” the spokesman stated.

380km2 in eastern al-Suwayda was declared fully liberated from ISIS by the Syrian state media on November 17. Despite this, according to local sources, some number of ISIS cells still hide in the desert area south of al-Safa. Furthermore, a large presence of ISIS can observed in the Homs-Deir Ezzor desert. Therefore, claims of some pro-government sources that the terrorist group was fully eliminated on the western bank of the Euphrates are premature.

The US-controlled zone of al-Tanf is being actively used by ISIS terrorists as a safe haven to hide from Syrian Army attacks and to re-locate its forces in eastern Syria. While it exists, it’s not likely that ISIS cells could be fully wiped out in this part of the country.

From its side, the US-led coalition is contributing every possible effort to prevent any security operations of the Syrian Army near the al-Tanf zone. On December 2, the coalition shelled Syrian Army positions near the al-Ghurab mount at the border with Iraq. The US-led force reportedly employed M142 High Mobility Artillery Rocket System (HIMARS) deployed at the al-Tanaf base.

The formal reason of the attack is unknown but US forces had repeatedly attacked Syrian Army units pursuing terrorists in the area on the edge of the so-called security zone near al-Tanf.

On December 3, the Kurdish People’s Protection Units (YPG) released a statement claiming that 11 Turkish-backed militants had been killed by the group in two fresh attacks in the Syrian area of Afrin.

On December 2, a YPG unit attacked a Jaysh al-Islam patrol in the village of Dermishmishe, near Afrin city. 5 Jaysh al-Islam members were reportedly killed and 3 others were wounded in the attack. Their vehicle was also destroyed.

On the same day, YPG fighters destroyed a military vehicle stationed at the headquarters of Ahrar al-Sham in the town of Jinderese. 6 Turkish-backed militants were killed and 8 others were wounded, according to the YPG report.

YPG attacks in Afrin will likely continue until the Turkish military and its proxies establish an effective security network in this part of Turkish-occupied Syria. However, a widely known incompetence and corruption within Turkish-backed militant groups delay and in some case even sabotage these Ankara-led efforts.