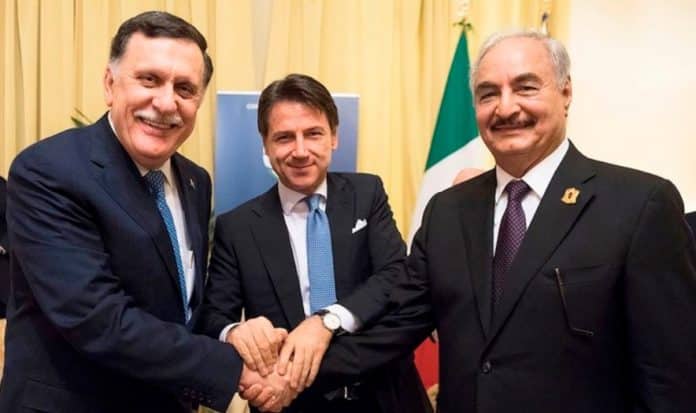 By Firas Saqmuri for Veterans Today
Another meeting on the Libyan settlement was held in Palermo, southern Italy, November 12-13. The leaders of the warring factions, EU and UN representatives, as well as the parties concerned, took part in the summit.
After two days of intense talks, the participants agreed to arrange a new conference in Libya by the beginning of the next year. It’s expected the date of the upcoming presidential and parliamentary elections would be announced there.
On the one hand, the result of the current meeting on Libya is conditional as the talks in Palermo haven’t brought something specific for the Libyans. Since the politicians meet and seek for the ways of resolving the crisis, the nation continues to suffer from the consequence of foreign intervention and Gaddafi overthrow in 2011.
On the other hand, Libyan National Army (LNA) commander Khalifa Haftar who was in Italy as a private person and met the conference participants on the sidelines. Haftar and Sarraj held an extensive private discussion during the informal talks of Italian Prime Minister Giuseppe Conte, Egyptian President Abdel Fattah al-Sisi, Tunisian President Beji Qaid Al Sebsi, Russian Prime Minister Dmitry Medvedev, and European Council President Donald Tusk. Although the result of the closed meeting is still unknown the very fact speaks volumes.
First, the negotiations on the sidelines of the summit were aimed at searching for the best ways of resolving the Libyan crisis. By participating in the sides demonstrated their desire and commitment to the fast ending of the civil war.
Second, the isolation of Turkey from political accommodation has become one of the most important outcomes of the summit. This step could be inferred from the fact that Turkish Vice-President Fuat Oktay was not invited. Perhaps, this is due to the Haftar’s position, who has repeatedly criticized both Ankara and Doha for supporting the Islamists in Tripoli.
Commenting on the results of the conference United Nations Special Envoy to Libya Ghassan Salame declared the success as all the sides agreed to follow the UN roadmap. The document envisages the amendment to the political arrangement signed in Skhirat, Morocco in 2015, holding a conference bringing together main political forces and civil society organizations, the revision of the Libyan constitution, and the preparation for the presidential and parliamentary elections.
Ways to resolve the conflict
By the way, holding the meeting in Palermo is not enough for the settlement of the Libyan conflict. The leader of the Eastern Libya Haftar and pro-Western politician Sarraj will face many challenges like the disarmament of numerous militias, initiation of the national reconciliation process, and economic recovery.
The first goal for two politicians in coordination is soluble. It is vital for the end of the civil war and the nationwide reconciliation.
Reconciliation is the most challenging component within the Libyan settlement. No one would assist the politicians in this matter. To resolve this issue Haftar and Sarraj will have to make a lot of efforts and spend time as the situation requires establishing a dialogue with various social, ethnic, and tribal groups. Such an approach will accelerate the creation of favourable conditions for holding presidential and parliamentary elections. The formation of new political power in the country will be the key to the economic recovery. There are a lot of opportunities to stabilize the situation in the state. According to the media, amount of Gaddafi’s family assets frozen in the Western banks rises to one hundred billion dollars. The leading economists believe these funds will be enough to restore the national economy ruined during the war. No doubt, the United Nations will unfreeze the Libyan assets after the establishment of the strong centralized power in the country.
Thus, despite all the contradictions between the parties to the conflict, the summit in Palermo could give the new impetus to the Libyan settlement. And the meeting of the political opponents represented by Haftar and Sarraj could become the first step towards consolidation and restoration of Libyan society.