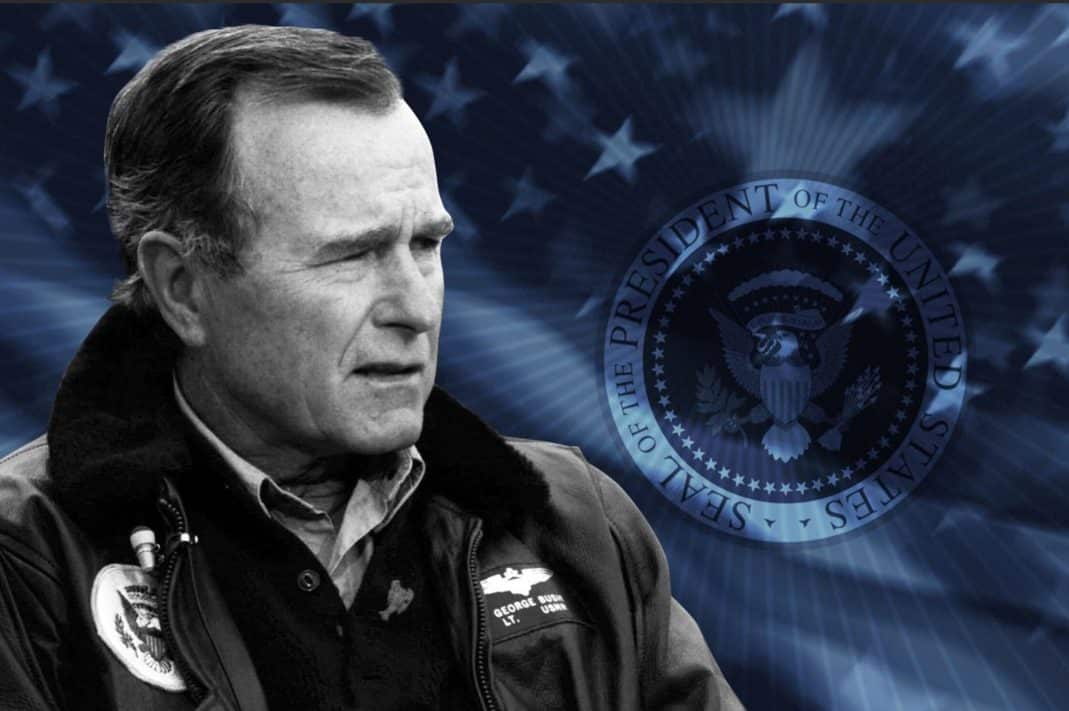 Misunderstood, underestimated, this describes George H.W. Bush. He can’t be understood when viewed through the superficial and fake narrative we are fed.

There was so much more, and Bush was so much bigger than life, in ways very few will understand. I will open this door a bit, as much as I am allowed.

George H.W. Bush watched as a shadow government was formed in Washington. He didn’t fully understand what was going on until he was buried in his final election campaign, and by that time, it was too late to do anything from within a crippled White House where everyone around him had been compromised.

You will read truth here never before heard.

When we lost George Herbert Walker Bush, an era came to an end. This was never a perfect man. I had a chance to spend some time with Bush 41. I saw in him what I saw in so many young Vietnam vets, someone who blindly went to war and came back damaged, maimed by PTSD, and moved on with life anyway.

Bush had one major “foil” in his life, Benjamin Netanyahu. Few understand this, and the smears against Bush 41, that too many of us have wrongly bought into came from the professionals of all time.

Bush died with Netanyahu and Adelson still in power in the US, ruling America through Donald Trump. He would have had it otherwise at any cost.

It is easy to go after Bush, he is low hanging fruit for the endless armies of gnawing rats the internet breeds, the smear mechanism bred by the ADL/JDL/AIPAC/SPLC and the crime families behind them, the Bronfmans, the Adelson gambling empire….

When Bush joined the Navy at 19, his father was a US Senator, a father who spent a decade and a half on Wall Street fronting for the Warburg/Schiff banking empire in their efforts to build Nazi Germany on behalf of Zionist interests.

If you don’t understand any of this, or how it works, or the trail it left and how it defines the world we live in today, you aren’t alone. Historians following this trail lose their jobs, books aren’t published, it gets worse, a long history of deaths and smeared reputations.

The Bush family has been at the center of efforts to destroy the United States for some time, with an exception, George Herbert Walker Bush.

Bush worked in the shadows for decades, after his truncated presidency, to stop nuclear proliferation, false flag terrorism like 9/11, and restore some sanity to a Washington culture that had fallen victim to the Satanic pedophile rings Robert Steele is hunting down today.

Washington fell under the spell of dark forces to an extent on George HW Bush’s watch, and he knew it. He personally funded investigators, almost all of whom were murdered, through his offices on Memorial in Houston.

This story will never be told, except at VT or when we can secure the survivors out of reach and allow their debriefings to be published.

Bush 41 spent much of his life trying to clean up the messes of others, and to be truthful, messes caused by his own “buy in” during the Reagan years. Remember, he inherited Cheney and Rumsfeld. Rumsfeld was a Navy pilot but saw no action. Cheney was a draft dodger beyond imagination, right up there with Bush 43.

The door they opened, taking aim at Saddam as an “easy target,” allowed Israel, through the neocons and fake think tanks, to build a mechanism to overthrow the US.

It took little effort to bring the defense and oil cartels into line with America’s “forever at war/police state at home” destiny.

Those papers we have from the Bush investigators trace it all back to 1983, the Marine barracks in Beirut was bombed, according to our records using a tactical nuclear weapon exploded as a truck bomb.

We saw this same thing over and over, Khobar Towers 1996, OKC, Bali, the same fingerprints, Mike Harari, Mossad, even the Russians had it all according to Dmitri Khalezov whose investigations came to the same conclusions as those financed by Bush 41.

It was Bush records that told us of how Israel stole 5 American crypto machines from the UN base on Golan and used these to manipulate US intelligence for a decade. The records, we are told, sit in Houston in the Bush Presidential Library, hidden behind a filing cabinet possibly. Excuse the humor.

The bombing of the USS Cole in 2000 was one of these Israeli ops made possible by penetration of US crypto, the KG 84 that Canadian troops stole and sold to Israel as was later learned and, of course, covered up.

The existence of this equipment in the hands of non-cleared foreign troops was hidden from the NSA for a decade, allowing intercepts of America’s highest level communications which nearly brought about World War III.

The only reason this could go on, of course, is that the current code keys were renewed continually, passed on to Israeli intelligence by traitors in the White House.

Despite Bush 41 efforts to “fix this,” he was fighting a losing battle.

Bush also personally paid for an investigation into FBI leaks that led to the murder of Daniel Pearl, who was kidnapped off the streets of Karachi by the same gang that later abducted Dr. Aafia Saddiqui and sold her to the CIA as a fall guy to sell the fake yellowcake uranium story used to justify the invasion of Iraq.

What is remembered is the Valerie Plame/Joe Wilson story, but it went further, piles of fake documents out of a Mossad cell in Rome, fed into the Carabinari and into NATO and onto the White House, all directed by the cabal Cheney and Rumsfeld partnered with, the Wolfowitz gang, the “neocons.”

Bush watched the world burn down around him, watched this gang of rats take over more than just Washington.

Bush records also cover the kidnapping and murder of Marine Colonel Higgin in Beirut 1989, another Mossad operation personally ordered by Benjamin Netanyahu, or so the documents I am looking at say.

The notes describe investigators finding Higgins’ dress blues and saber sitting in his office closet and handing them over to Sergeant Major Frank Sayers, who returned them to Higgins’ wife.

Bush personally financed and led operations that might well have stopped 9/11 were it not for traitors in Washington. He helped set up front companies that shadowed the huge influx of Mossad “art student” cells and their partners in Saudi intelligence in the months prior to 9/11.

All involved were silenced, all records seized by the real 9/11 grand jury in Houston that sits on a mountain of evidence, thousands of pages of communications between Israeli and Saudi teams, US officials in the DOJ, the NYPD commissioner’s office, key DC think tanks, all planning 9/11.

It was FBI agent Robert Hanssen, arrested in February 2001 as an Russian agent. Aldrich Ames, his partner, had been arrested in 1994. The secret here is the level of cooperation between Israeli and Russian intelligence during the Cold War, the fact that Russia saw Israel as their “junk yard dog” in Washington, a close communist nation penetrating America’s intelligence community.

Only longtime CIA insiders and key members of congress knew the whole story about Jonathan Pollard, part of the Russia “mole” triumvirate with Hanssen and Ames, 3 of dozens, the 3 that were caught.

Hanssen had been ensnared by the infamous Washington pedophile ring we hear so much of, something edited out of his bio. We have the real files. There were many other names with Hanssen and Ames, names still prominent in Washington, untouchable and working to destroy the United States.

Hanssen, in turn, set up an organization that fed dozens of members of congress into pedophile “honey traps,” many of whom now head committees and insulate the real power behind our government.

Follow every congressional investigation during the Obama administration, every single one, look at the leadership, all are blackmailed pedophiles working for enemies of the United States.

Nearly every GOP committee chair in the House and Senate had been burned.

The key question, as was brought up to me by Robert David Steele, was how Pollard got the information he passed on to Russia through Israel, the CIA NOC or non-official-cover list that included 1100 agents and assets who were slaughtered, blinding US intelligence for a decade.

When Russia came apart, America knew nothing, our organizations dating back from the partnership between the fledgling CIA and Gehlen’s NAZI networks in Moscow, had been axed, all arrested, tortured and murdered by orders of Netanyahu. Yes, we really mean Netanyahu.

This is from Bush records, copied directly:

During Operation Desert Storm in 1990, the head of the UN security operation in Golan met with Benjamin Netanyahu at Fink’s Bar in Jerusalem, a famous watering hole. I personally debriefed this individual. This is a cut and paste from Bush 1 files:

“If we get caught. They will just replace us with persons of the same cloth. So it doesn’t matter what you do. America is the golden cow and we will suck it dry chop it up and sell it off piece by piece by piece until there is nothing left but the world’s largest welfare state that we will create and control. Why because its gods will and America is big enough to take the hit and survive so we can do it again and again and again. This is what we do to countries that we hate.

Destroy them very slowly and make the people suffer for refusing to be our slaves.”

By 2005, with the compromised Supreme Court able to legalize Sheldon Adelson’s power play against congress, through “Citizens United,” any vestige of domestic control of America, even by thieves and criminals, was pushed aside.

This became a slave nation, the one we see today. Every act by the US serves an international criminal conspiracy, and everyone knows it.

George H.W. Bush is the last person to try to stop any of it. The evidence of this, particularly in how “W” relates to Trump, is its own story. It was during his son’s presidency that many of us thought America reached its low ebb.

We didn’t know what was coming.

The World if Gore had Won