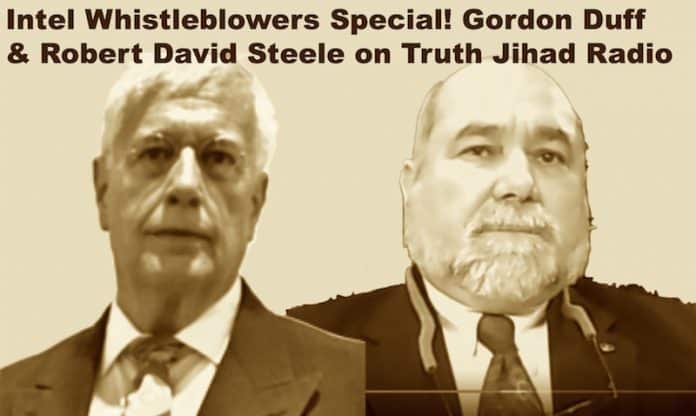 Gordon Duff, Senior Editor of Veterans Today, is an ex-Marine, former high-level US intelligence insider, and leading figure in open source intelligence. A few days ago he met with a fellow ex-Marine: former CIA Clandestine Services officer Robert David Steele—often considered the founder of the open source intelligence movement, a prolific reader and book reviewer, and the only ex-CIA official who has publicly admitted to running a false flag operation for the Agency. The meeting, held at Gordon’s impressive “estate” in western Michigan, was not exactly top secret (I heard about it in advance and considered attending). Among the topics under discussion:

*Is Trump a corrupt, illiterate Likud-aligned narcissist and total disaster for the USA and the world? Or is “the Don” a 3D chess playing “America first” guy who wants to expose the Deep State and maybe even end the Empire?

*How can America rebuild its infrastructure and economy to benefit ordinary people rather than the .001%?

*Could we soon see a long-awaited disclosure of secrets concerning anti-gravity, free energy, and an alleged ET presence on Earth?

*How might the scourge of Zionist hegemony be purged from our shores (and the shores of Occupied Palestine)?

*Is the FBI, along with a secret Houston grand jury, sitting on a pile of evidence concerning who really was behind 9/11?

…and last but not least:

*Could Robert David Steele’s plan to bust up the two-party tyranny by running well-funded, closely-cooperating third-party candidates in the 2020 elections actually work?

Ex-Marines Duff and Steele—two modern-day Smedley Butlers—are both smart, headstrong guys who don’t suffer fools gladly. Prior to this meeting they were at loggerheads over their conflicting views on Trump. But they seem to have emerged from their meeting with increased mutual respect…and a degree of optimism about the prospects for saving America.

Note: I will be interviewing Robert David Steele live this Friday, December 7, 8 to 9 pm Eastern on Revolution.Radio.