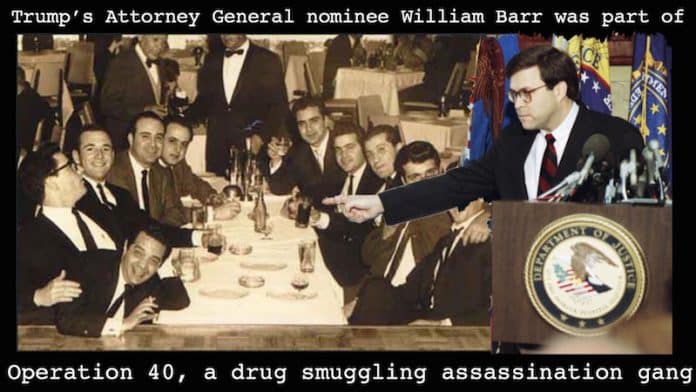 Anybody who thinks Trump is out to drain the swamp and bust the Deep State just got a dose of reality medicine, in the form of Trump’s nomination of swamp monster William Barr as our next Attorney General.

According to former Bush-CIA black ops specialist Chip Tatum, Barr was part of Operation 40, an Agency-linked criminal gang that moved huge quantities of drugs and was involved in many high-level political assassinations, including those of the Kennedies, Swedish Prime Minister Olof Palme, and dozens of others. Ironically, Trump—who tossed a few rhetorical punches at the Bush Crime Family during the 2016 Republican primaries—has just nominated a man who represented the Bush CIA drug cartel, both within the CIA itself (1973-1977) and later when he served as “Opium Poppy” Bush’s Attorney General.

Chip Tatum: Several of the members that I flew to this meeting in El Ocatal – here are the people who were there: it was General Noriega, Mike Harari, who was a retired Mossad agent assigned to Gen. Noriega, Felix Rodriguez, Joe Fernandez, who was the CIA station-chief in Costa Rica, Gen. Gustavo Alvarez, who was the U.S. – or the Honduran Army chief of staff, and a guy named William Barr, who represented the assets of this enterprise.

Gunderson: Now, wait a moment. William Barr used to be attorney general of the United States.

Tatum: He later became, under his boss George Bush, the attorney general of the United States, that’s correct.

Tatum: Yes, I believe so.

Gunderson: Well, isn’t that interesting? …so we have Vice President Bush, we have Ollie North, we have William Barr involved in the drug-operation. It’s that simple, isn’t it?

So why would Trump fire Jeff Sessions and appoint a depraved denizen of the Deep State to replace him? Because Trump is the slimiest, scaliest reptile from the deepest darkest part of the Deep State swamp. If you haven’t figured that out yet, you aren’t paying attention.

Note that Trump has been slyly boasting of his swamp creature status for years. Watch him rapturously identifying with the title character in his favorite poem, “The Snake.”