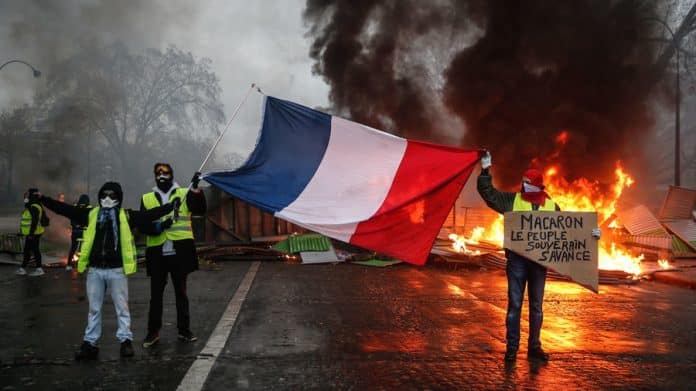 [ Editor’s Note: John Wight brings us a delightful recap of Macron’s implosion as the leader of France who may be a dead man walking and following the last failed French leader.

After postponing the new fuel “green” taxes, which went over like a lead balloon, they have been cancelled by the Prime Minister. But Macron threw a match into a public anger tinder box and the diverse array of protester demands have grown into a class warfare struggle which had been long simmering.

France is now in a no man’s land situation, facing a political foe with no head to chop off, no one to arrest as the key organizer, because there isn’t one. Nor do we see Muslim radicals in the streets, but a representative slice of the French population, especially the young who see a very limited future for themselves.

Not only Macron but France’s entire political structure is on thin ice here. A misstep, especially an over reaction, could see the unions sitting on the sidelines until now, joining those already in the streets with strikes.

Protestors seemed to sense that Macron is wounded and they would get a much better deal with a new government than one whose poll ratings have been in the toilet for some time. Everyone is keeping their heads low to avoid drawing cross hairs.

But that will change if Macron’s political opposition steps forward to scoop up the protester support, or some leadership emerges from the street which seems unlikely from the collage of passionate groups involved, including the anarchists who always want to tear everything down just for the fun of it.

The security organs will pray that the lack of organization leadership will implode the protest. Social media has been the leader up until now, and there has never been a ballot box to check off with that name on it.

And lastly, the match lit here in France could spread to other EU States, and you can be sure they are monitoring closely what is going on in Paris, and doing some planning if similar protests emerge in their own countries.

Fortunately, the year end holidays and winter is not the time of choice for most revolutions, but many have happened with the timing being organic, meaning it just happened when it was ready to. I can smell the fear in air in France, all the way from Michigan… Jim W. Dean ]

Though the Gilet Jaunes (Yellow Vest) movement in France may appear to have erupted from nowhere, its arrival has been a long time coming.
–

“Men make their own history,” Karl Marx reminds us, “but not of their own free will; not under circumstances they themselves have chosen but under the given and inherited circumstances with which they are directly confronted.”

And confronting the thousands of Yellow Vest protesters who’ve been laying siege to central Paris these past few weeks – along with millions of ordinary working people across France – have been and are the deepening consequences of a broken and defunct neoliberal economic model, compounded by the refusal of its prime movers, chief among them French President Emmanuel Macron, to wake up to the deepening dystopia fashioned in its name.

The French government’s decision to suspend the proposed levy on fuel was a victory for the French people, whose tradition of fighting and struggling for the right to a quality of life consistent with human dignity is centuries old.

In forcing Macron – whose disregard for those at the sharp end of the neoliberal god he worships has been inordinate – to back down, the Yellow Vest movement has rendered working people throughout the EU a great and significant service, reminding them that passivity in the face of injustice only succeeds in inviting more injustice.

Macron’s initial ‘let them eat cake’ refusal to countenance backing down (before, that is, he did back down), proclaiming with the bombast of the mouse to the cat that “People complaining about rising fuel prices are the same ones who complain about pollution and how their children suffer,” will follow him all the way to his resignation or the next French presidential election, whichever comes first.

Clearly and obviously the fact (remember those?) that just 100 of the world’s leading companies and corporations are responsible for 71 percent of emissions is not something that overly intrudes on the consciousness of the current occupant of the Elysee Palace.

It is those very companies whose interests and whims Macron with his recent raft of tax cuts for employers and the wealthy and cuts to pensions and welfare benefits for those at the bottom of the income scale, serves so avidly. 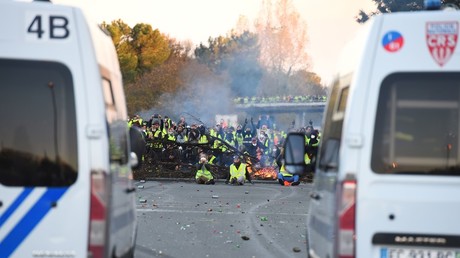 ‘Out of touch’: Protesting French people want to be heard – but gov’t does not listen

Moreover, said companies and corporations are the recipients of mammoth sums of institutional largess, courtesy of the world’s leading banks and financial institutions; the very banks that brought us the 2008 global financial crash and worldwide recession. This, in turn, was met by the unleashing of an economic war against ordinary people, who were not responsible for the crash, in the form of austerity.

Only in joining the aforementioned dots are we are able to cut through the fog of neoliberal propaganda relentlessly spewed out by an establishment media that long lost the right to be considered anything other than part of the problem; its primary role not to hold the rich and powerful to account but instead to throw dust in the workers’ faces.

Straddling the world stage like a colossus in his own mind, but a low rent Napoleon in everyone else’s, with his talk of a European army, Macron is the epitome of the confected politician to which neoliberalism has given birth over the years.

Even before the current crisis his approval rating was so low it was drilling its way through the floor; yet as with other leaders who are cut from the same expensive cloth, being impervious to the real world is deemed compatible with strong leadership.

It really does beg the question of when, if ever, those who inhabit this cloistered Western neoliberal establishment will finally wake up to the consequences of their ruinous economic dictatorship?

In the UK we have the unedifying sight of Tony Blair being wheeled out as the de facto leader of the ‘reverse Brexit’ movement.

That there is anyone who actually believes that the man who took petrol and matches to the Middle East, and who carries about as much weight in the country’s Brexit heartlands as a fly’s wing, is capable of directing anything except his chauffeur from one of his gilded mansions to a TV studio and back again, is remarkable.

Meanwhile, on the other side of the Atlantic, the lid of Hillary Clinton’s political coffin has been pried open by an out of touch Washington liberal establishment – one that left planet earth after Trump’s election in 2016 and has been floating around somewhere in outer space since. 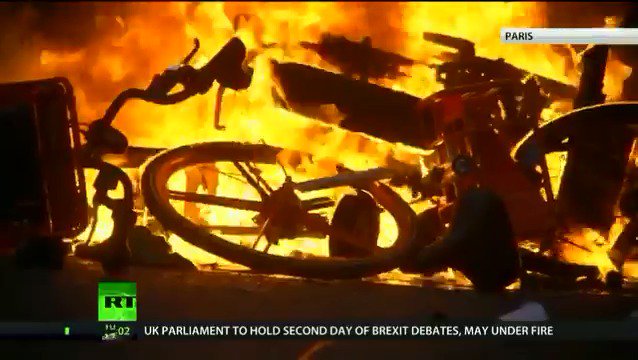 The catastrophic refusal of liberal America to confront the truth that Trump is the political child of what Clinton and Obama served up to the American people over too many years, rather than an unpleasant interruption to business as usual, is one of the strongest arguments yet in opposition to the legalization of cannabis across freedom’s land.

Returning to the sage of Trier, Karl Marx, the following from his classic 19th century work, ‘The Eighteenth Brumaire of Louis Bonaparte’, delineates in Technicolor detail the reality of governments that genuflect at the altar of capital in the 21st century:

“Bonaparte [Macron] would like to appear as the patriarchal benefactor of all classes. But he cannot give to one class without taking from another. “

The Yellow Vests have made it known that the days of the French working class being the class that is taken from are over.

Up and down the UK, in communities gutted and garroted by the country’s neoliberal establishment since the Tory’s came to power in 2010, the only sound emitted in response up to now has been the rumbling stomachs of hungry children – of which in 2018 there are over 4 million.

But, then, even the most slumberous lion has to awake sometime. And when it does?