Home History Navy to Announce Findings in the World War I Sinking of Cruiser... 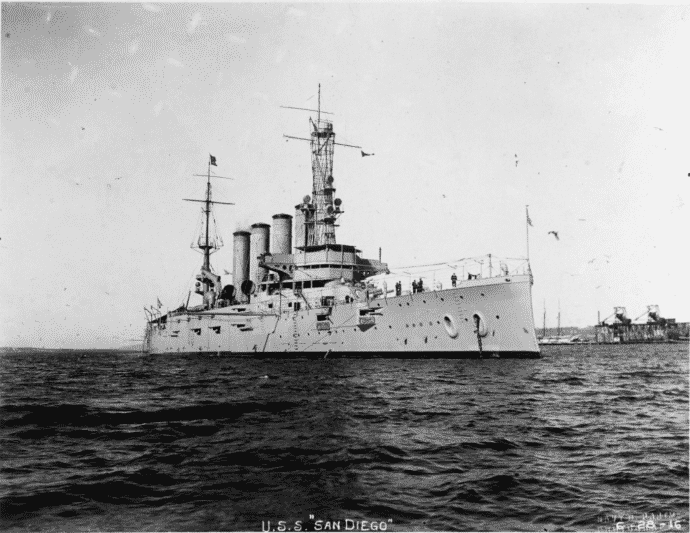 Photo of the USS San Diego: Photographed 28 January 1915, while serving as flagship of the Pacific Fleet. Her name had been changed from California on 1 September 1914. Note two-star Rear Admiral’s flag flying from her mainmast top. U.S. Naval History and Heritage Command Photograph.

Navy to Announce Findings in the World War I Sinking of Cruiser USS San Diego Tomorrow at 11 a.m. Eastern

From Naval History and Heritage Command, Communication and Outreach Division

In a press conference during the American Geophysical Union’s (AGU) Fall Meeting, Alexis Catsambis, Ph.D., of the Naval History and Heritage Command, Art Trembanis, Ph.D. of the University of Delaware, and Ken Nahshon, Ph.D., of the Naval Surface Warfare Center, Carderock Division, will brief media on their collaborative examination of data gathered from the 100-year-old wreck.

• Those unable to attend in-person, can watch the press conference live via web streaming here:
https://fallmeeting.agu.org/2018/media-center/webstreaming/

• The conference can also be viewed after the fact on AGU’s YouTube channel here:
https://www.youtube.com/user/AGUvideos/videos.

On July 19, 1918, armored cruiser USS San Diego (ACR 6) sank in just over 100 feet of water off the coast of New York while en route to transatlantic convoy escort duty during World War I. It was the U.S. Navy’s only major warship lost during the Great War.

During the presentation, the scientists will detail how historical analysis, archaeological research, site investigation and impact and flood modeling combined to determine whether San Diego’s sinking was the cause of sabotage, accident, enemy torpedo or enemy mine.

The USS San Diego Project was launched to commemorate the loss of USS San Diego and six of her Sailors in defense of the nation during the Great War, and raise awareness of the importance of preserving the wreck site into the future.

AGU galvanizes a community of Earth and space scientists that collaboratively advances and communicates science and its power to ensure a sustainable future.

Characteristics of the USS San Diego:

The Naval History and Heritage Command, located at the Washington Navy Yard, is responsible for the preservation, analysis, and dissemination of U.S. naval history and heritage. It provides the knowledge foundation for the Navy by maintaining historically relevant resources and products that reflect the Navy’s unique and enduring contributions through our nation’s history, and supports the fleet by assisting with and delivering professional research, analysis, and interpretive services. NHHC is composed of many activities including the Navy Department Library, the Navy Operational Archives, the Navy art and artifact collections, underwater archeology, Navy histories, ten museums, USS Constitution repair facility and the historic ship Nautilus.

For more information about the Naval History and Heritage Command visit https://www.history.navy.mil/.