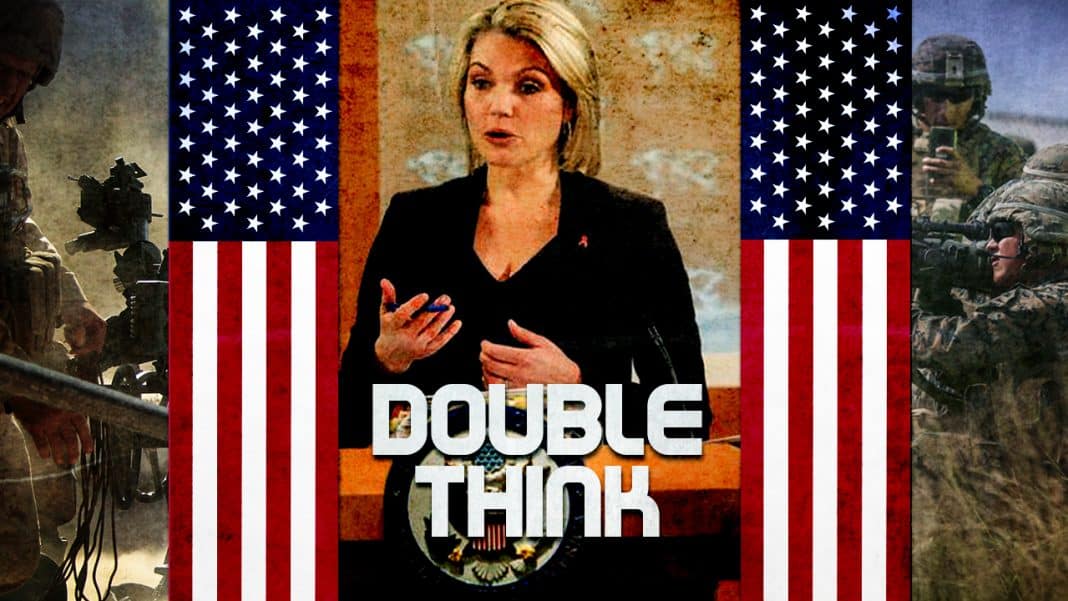 Editor’s note:  Again, and this happens on a daily basis, I am deeply ashamed on of Donald Trump and Mikey Pompeo.  On a daily basis they defame, defraud and debase the United States.  Lock them up.g

On December 7, the US State Department finally released an official statement on the November 24 chemical attack, which hit the government-controlled city of Aleppo injuring over 100 people. However, instead of condemning terrorist groups, which used chemical weapons, the State Department accused the Assad government and the Russians of gassing Aleppo residents to undermine the ceasefire in the Idlib de-escalation zone.

The Russian Defense Ministry reacted to accusations by saying that the supply schedule of chemical weapons by the Western special services to the terrorists in Syria is synchronized with State Department’s statements. The defense ministry added that it has undeniable evidence that the chemical weapons attack was carried out by militants.

According to the Russian side, the US may have been using chemical weapons accusations against Russia and Syria to draw attention from its own war crimes in the area of Hajin in the Euphrates Valley.

These two of 12 Turkish observation posts established in the framework of the Idlib de-escalation agreement have a special importance because they are located in the area where a Syrian Arab Army (SAA) military action is expected in case of a further escalation in the region.

Sporadic clashes between the SAA and militants erupt in northern Hama on a constant basis. Over the past few days, the SAA has repelled several militant attacks. On December 8, the Syrian military even employed an armed UAV to target positions of the National Front for Liberation (NFL) in the town of al-Hakurah.

On December 8, Mustafa Bakkor, a spokesman for Jaysh al-Izza, claimed that Iranian forces in northern Hama are raising Russian flags over their positions to “protect themselves from Israeli bombardment.” Earlier in 2018, the Free Syrian Army in southern Syrian made similar accusations claiming that Iranian forces were wearing SAA uniforms to avoid being detected by the Israeli military and intelligence.

The Syrian Observatory for Human Rights reported that government forces had arrested 12 suspects during a recent operation against ISIS cells in western Daraa. Some of the suspects are reportedly related to Abu Ali Al-Baridi, a former leader of the Khalid ibn Al-Walid Army. The ISIS-linked terrorist group was eliminated in July as a result of the joint operation by the SAA and former members of the Free Syrian Army.

In Deir Ezzor province, the US-backed Syrian Democratic Forces (SDF) continue their efforts against ISIS. Last weekend, SDF units backed up by US and French Special Operations Forces entered the town of Hajin and captured over a half of it. The advance was supported by more than 100 airstrikes of the coalition.

The ISIS-linked news agency Amaq claims that ISIS members killed over 20 SDF members and destroyed at least 2 vehicles in the clashes. However, it appears that if the US-led forces really seek to capture Hajin, they will do this soon.