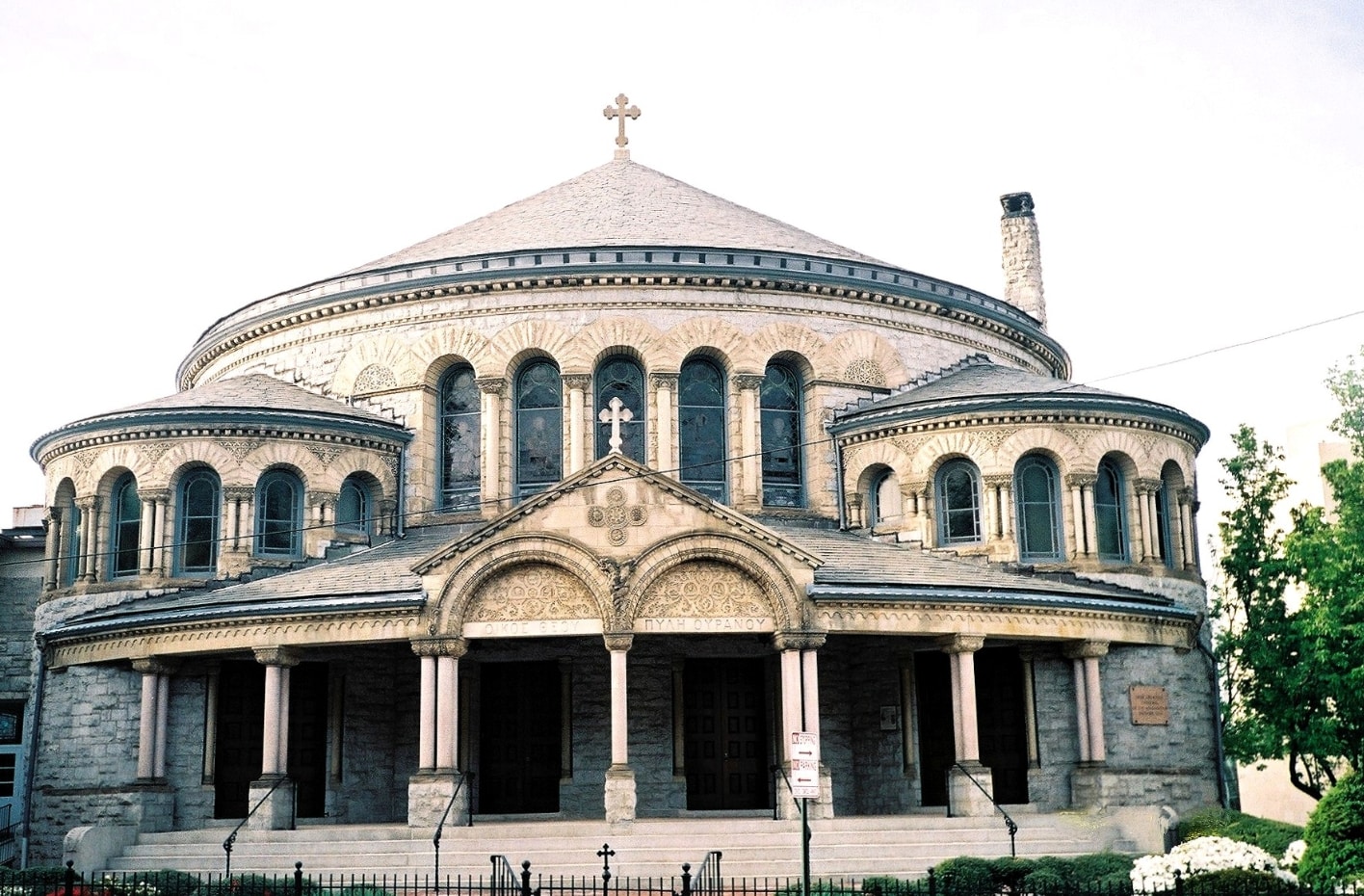 Shortly before the latest meeting of the Holy Synod of the Ecumenical Patriarchate taking place from November 27 until 29, once again there were rumors about Archbishop Demetrios’ imminent retirement. Patriarch Bartholomew was claimed to have met with the GOA Primate in Geneva, and after that the latter decided to leave office. The date of the upcoming “archbishopric elections” was “revealed”, and even the names of Demetrios’ successors mentioned. Though, this information may have been leaked by the “candidates” themselves. 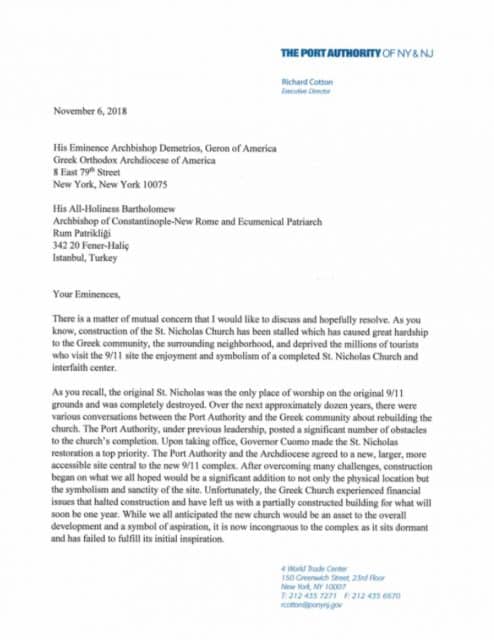 Who can be interested in disseminating such rumors about the GOA? It’s no secret that an influential group of Greek Americans related to the Archdiocese is displeased with the rule of Demetrios. The opposition grows stronger among some GOA clergymen, the Order of St. Andrew and the Hellenic Initiative Foundation. 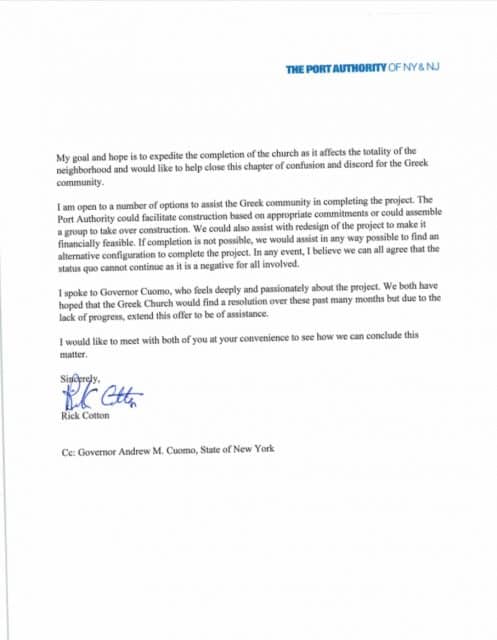 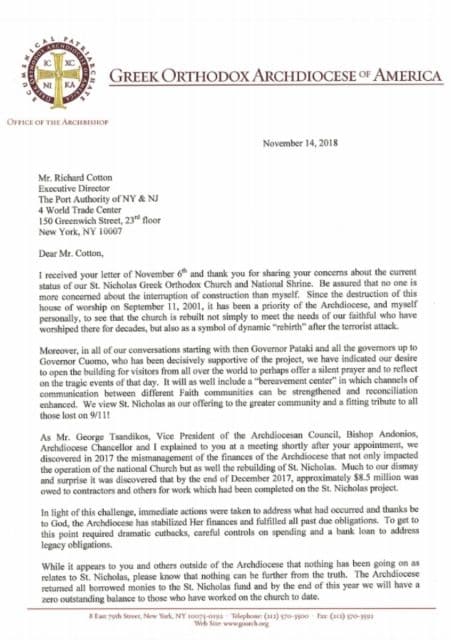 One of the persons who mastermind the campaign against the Primate is Mark Arey, Executive Director at the Hellenic Initiative. He spent many years serving at the GOA, was Director of the Office of Inter-Orthodox, Ecumenical and Interfaith Relations but left the Archdiocese a couple of years ago. 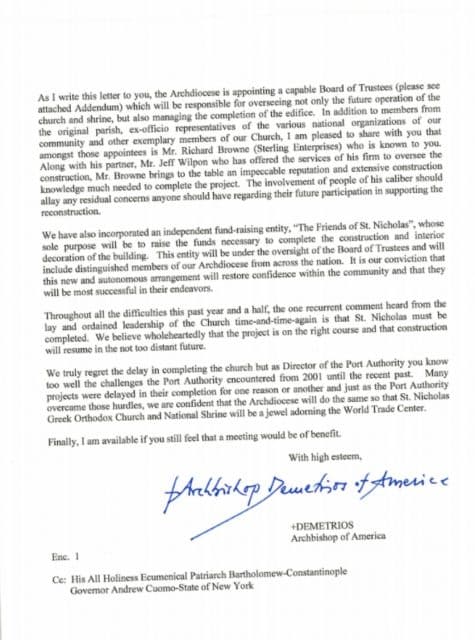 In April this year Arey published an open letter on Facebook persuading the Archbishop to retire.

A bit later, in June, John Catsimatidis, a Greek-American businessperson, member of the Order of St. Andrew and the CEO of the Hellenic Initiative, criticized Demetrios. The accusations were still the same: mismanagement, the misuse of funds embarked for the St. Nicholas construction project and the aggravating crisis at Hellenic College Holy Cross Greek School of Theology. It seems that in his opponents’ opinion, Demetrios is to be blamed for all the woes!

In early November, a couple of weeks before the Synod session, another attack was committed against the Archbishop. Governor Andrew Cuomo and the Port Authority of NY & NJ (the landowner of Ground Zero; an agreement on the construction of the St. Nicholas Church was reached with the company in 2011), expressed their concern since the work was interrupted for more than a year. It was reflected in the letter of Executive Director of Port Authority Richard Cotton, which was also sent to the Phanar.

In his official answer, Demetrios provided information on what measures were taken to resume the construction and what was already achieved.

All this was a set up to convince Patriarch Bartholomew and the Holy Synod that Archbishop Demetrios should be replaced, sources say. An important role here played by Mark Arey, who used to serve as a spokesman for St. Nicholas Church at Ground Zero, and Presbyter Alex Karloutsos whose contacts with many influential political figures are widely known.

However, all the efforts of Demetrios’ opponents were in vain. When it became evident that the Archbishop wouldn’t leave office after the Synod, they were frustrated. Some even addressed Patriarch Bartholomew urging him to remove the Primate since according to them there was no way to deal with the crisis without his resignation.

There were even selected hierarchs, who could find a way out of the current situation. Most popular names are metropolitans Elpidophoros Lambriniadis of Bursa and Emmanuel Adamakis of France. Both of them are involved in the Ukrainian Autocephaly issue – Elpidophoros is going to print his book on it and Emmanuel is responsible for “shuttle diplomacy” between the Ecumenical Patriarchate and Kyiv. If Demetrios leaves, the latter is said to almost certainly become the next archbishop but rumors about his sexual orientation can become a serious impediment for him.

Nonetheless, the Primate of the Greek Orthodox Archdiocese of America will unlikely be changed in the upcoming months. Today Constantinople is focused on Ukraine and Patriarch Bartholomew will hardly decide all of a sudden that the Archbishop’s replacement is to be given a higher priority. For now, political intrigues will fade but the fighting will start over again when the situation allows.