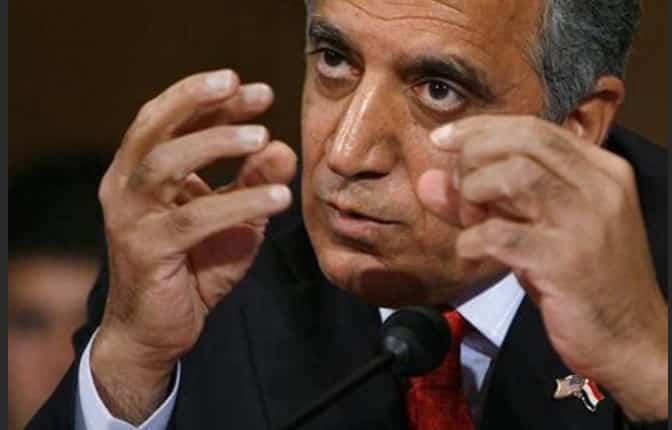 Zalmay Khalilzad is an Afghan national belonging to Noorzai clan in Laghman province. He has now an American national and has worked closely with successive US regimes starting Cater administration. He was advisor of Reagan during the war in Afghanistan against the Soviets, he worked with Brzezinski, worked as Director RAND and Counselor CSIS. He worked closely with the State Department and Pentagon and has been involved in formulation of national policies since 1980s. He served as ambassador in the UN, in Afghanistan and Iraq and has made his place among the civil and military hierarchy in USA because of his grasp over defence and security matters. He has written comprehensively on the strategic trends that would affect the future strategic environment of the world in the future and is among the exponents of the US global leadership and aggressive foreign policy to protect the US global interests. One such treatise is “Sources of Conflict in 21st Century.

Appointment as Special Envoy to Afghanistan

He was lined up for the post of Secretary of State in Trump administration in 2017, and has now been appointed as the US Special representative for Afghanistan. He has been mandated to bring the Taliban to the negotiating table for peace talks and broker a political settlement with a view to end the 17-year war. To this end, he had embarked upon a tour from October 4 to 10 this year during which he visited Afghanistan, Pakistan, UAE, Qatar, and Saudi Arabia.

He recently concluded another suchlike visit from 2-10 December and his itinerary included Afghanistan, Pakistan, Russia, Uzbekistan, Tajikistan, Turkmenistan, Belgium, UAE and Qatar. During the 3-day talks at Doha, the two Taliban representatives Khairullah Khairkhwa and Muhammad Fazal insisted upon postponement of presidential election due in April next and establishment of interim government under neutral Abdul Sattar (a Tajik). Zalmay’s suggestions of ceasefire and settlement within six months were made subject to acceptance of demands. Foremost among the demands is date of complete withdrawal of US forces from Afghanistan.

Zalmay had put forward the idea of privatizing the war efforts in Afghanistan by handing over the security to Blackwater and civil contractors to relieve US/NATO troops. The idea couldn’t materialize due to strong objections raised by the unity government in Kabul. Obviously, such a venture would have saved the lives of the Americans but trebled the civil casualties in Afghanistan as had happened in Iraq as well as in Pakistan and elsewhere wherever the Blackwater/XE was employed. The idea has now been dropped.

Zalmay has traditionally been hostile towards Pakistan and has never been sensitive to Pakistan’s point of view. He has always sold the narrative of Indo-US-Afghan nexus which is anti-Pakistan. Highly critical of Pakistan, he has blamed it for playing a double game by indulging in cross border terrorism in Afghanistan and in failing the counter terrorism efforts of the occupying forces and that of ANSF. He has favored India’s heavy presence and influence in the Afghan internal affairs and termed it as constructive. He never paid any heed to Pakistan’s complaints of Indian involvement in Baluchistan and FATA and termed them as paranoia and figment of imagination.

Holding Pakistan solely responsible for the instability in Afghanistan, he has been urging Washington to declare Pakistan a terrorist State. Besides the Indian role, Zalmay has been instrumental in coloring the perceptions of the US leaders and changing their amity into enmity. He is a close friend of ex CIA Director and current Secretary of State Michael Pompeo who was instrumental in awarding him his current portfolio, NSA John Bolton, Commander CentCom Gen Joseph Votel and US Senators who are unfriendly to Pakistan. He is also a close friend of Hussain Haqqani as well as of Asif Zardari. When the latter was undergoing treatment in USA in 2006-7, Zalmay had purchased a flat for him in New York. Zalmay also played a role in NRO that was signed by Gen Musharraf on October 5, 2007.

Seeing through the Afghan and Indian prisms, Zalmay is now trying to create an impression as if Pakistan is the biggest impediment in the way of peace talks since it is unprepared to let go its obsession regarding India’s alleged clandestine operations, and is insisting on radical decrease of Indian presence in Afghanistan, wanting Pakistan-friendly government in Kabul and desiring to remain a major player in Afghan affairs guiding Afghan foreign policy. He is among the many poisoning the minds of the US leaders that Pakistan is still providing safe havens to the HN and Afghan Taliban, controlling them and directing them to continue fighting till such time peace on their terms is not agreed to. This narrative is similar to the one espoused by Trump and by Kabul regime. He could be behind the US move to include Pakistan in the FATF blacklist on December 12 at a time when the leadership in Pakistan had begun to feel that a thaw in Pak-US relations had occurred after the Trump’s letter to Imran Khan.

Pakistan had been voicing its concerns about the biased and hostile attitude of Zalmay in the past and Shah Mahmood Qureshi had expressed his reservations over his new appointment. Well knowing the discomfort of Pakistan with Zalmay, the mere fact that Washington has appointed him for this delicate task of brokering peace speaks of its ill intentions. Before the arrival of his visit to Islamabad on December 4, Minister Human Rights Shirin Mazari rightly tweeted that he should bring a “less arrogant and hostile mindset” when he comes to Pakistan.

Zalmay who is still aspiring to become the Secretary of State since he is in good books of Trump, is faced with a dilemma. He is dealing with weak and unpopular national unity government in Kabul headed by Ashraf Ghani and Dr. Abdullah whose writ do not extend beyond Kabul and with whom the Taliban do not want to talk. He is mindful of the pitiful state of affairs of the ANSF who cannot defeat the Taliban or win back the lost territory and would splinter without air support. He also knows that the Resolute Support Mission locked up in 8 military bases are feeling isolated and marooned since their airpower is neither bolstering ANSF spirits, nor breaking the momentum of Taliban offensive. He is aware of the surging Taliban constantly gaining ground and causing casualties so as to bargain peace treaty from the position of strength. He is cognizant of the fact that the initiative is in the hands of Taliban since they control well over 60% of the territory.

He cannot ignore the growing influence of Russia, China and Iran in Afghanistan and is also conscious of the possibility of Iran providing all kind of military support to the Taliban in case the US decides to further punish Iran through additional sanctions, physical action or a regime change. He cannot rule out the possibility of arms supply to Taliban by Russia which might already be taking place. A proponent of use of military power and outreach for the attainment of global ambitions by USA, Zalmay is now in a fix because this strategy has failed in Afghanistan.

Since victory is impossible, the only options left are peace with Taliban, safe and honorable exit and leaving behind a friendly government. For withdrawal, the only route available is through Pakistan. For the success of the second option, Pakistan is the only country which can help but he recognizes that it neither trusts USA nor him. Pakistan has its own genuine security concerns which clash with Indian interests. Neither he nor USA can afford to annoy India to satisfy Pakistan.

India wants to continue bleeding Pakistan using Afghan soil and also want to be part of peace process, but Pakistan and Taliban are unwilling since like USA it has no right to be in Afghanistan. Positive impact of peace in Afghanistan on Pakistan will have a negative impact on the fortunes of BJP in India, which is vying to come to power again after the May 2019 elections. India will have to justify the huge money wasted in covert war against Pakistan without achieving any results. Modi’s charisma is fast fading as is evident from the state elections in the Hindi belt where the BJP lost to Congress in Chhattisgarh and Rajasthan and the outcome in Madhya Pradesh was on a razor edge.

The US stuck in Afghanistan is vexed over the budding Russia, China, Pakistan, Iran axis which is friendly towards the Taliban. While Iran is defiant, continuous resurgence of Russia and China and the latter poised to become the leading economic power of the world by 2025, and commencement of second phase of development of CPEC are causes of huge anxiety for USA. Another upsetting development for USA is the rapprochement between North Korea and South Korea and possible reunification next year, which may pull Japan away from the influence of USA. The US major ally Europe is faced with integration and economic problems owing to Brexit and economic crisis in certain European countries. 2019 is the presidential election year in Afghanistan and in November mid-term elections are due in USA. Trump administration must show some positive progress in Iran, Afghanistan, Syria and Ukraine.