Home Military Russia to track future US missiles with upgraded over-the-horizon radar
Share
Twitter
Pinterest
WhatsApp
Linkedin
ReddIt
Email
Print
Tumblr
Digg
Russia Today/Moscow: In response to US plans to pull out of the INF Treaty and the active development of its hypersonic technology, Russia is building a network of radar stations best suited to detect missile launches from afar.

Russia is seeking to install Container-type over-the-horizon (OTH) radar stations along its borders. The move will substantially boost Moscow’s capabilities to monitor airspace and detect missile launches, particularly in case of hypersonic projectiles.

Looking beyond the horizon

An OTH radar employs completely different technology, compared with conventional radar installations that only provide “line-of-sight” coverage limited to a range of dozens or hundreds of kilometers at best. OTH systems rely on radio waves bouncing off the ionosphere, Earth’s top layer that is heavily ionized by space rays. Radio beams of a specific frequency projected by an OTH transmitting antenna get bounced down high up in the sky and on their way back to the ground can be reflected back by aircraft, ships or missiles. The return signal then travels back to the receiving antennas, again, via the ionosphere. This technique extends coverage to thousands of kilometers.

Russian researchers had to develop new equipment and processing algorithms to compensate for the interference caused by Sun’s radiation in the ionosphere. It takes sophisticated mathematical algorithms to isolate relevant targets and, and more so to determine their velocity and direction based on the Doppler shift. 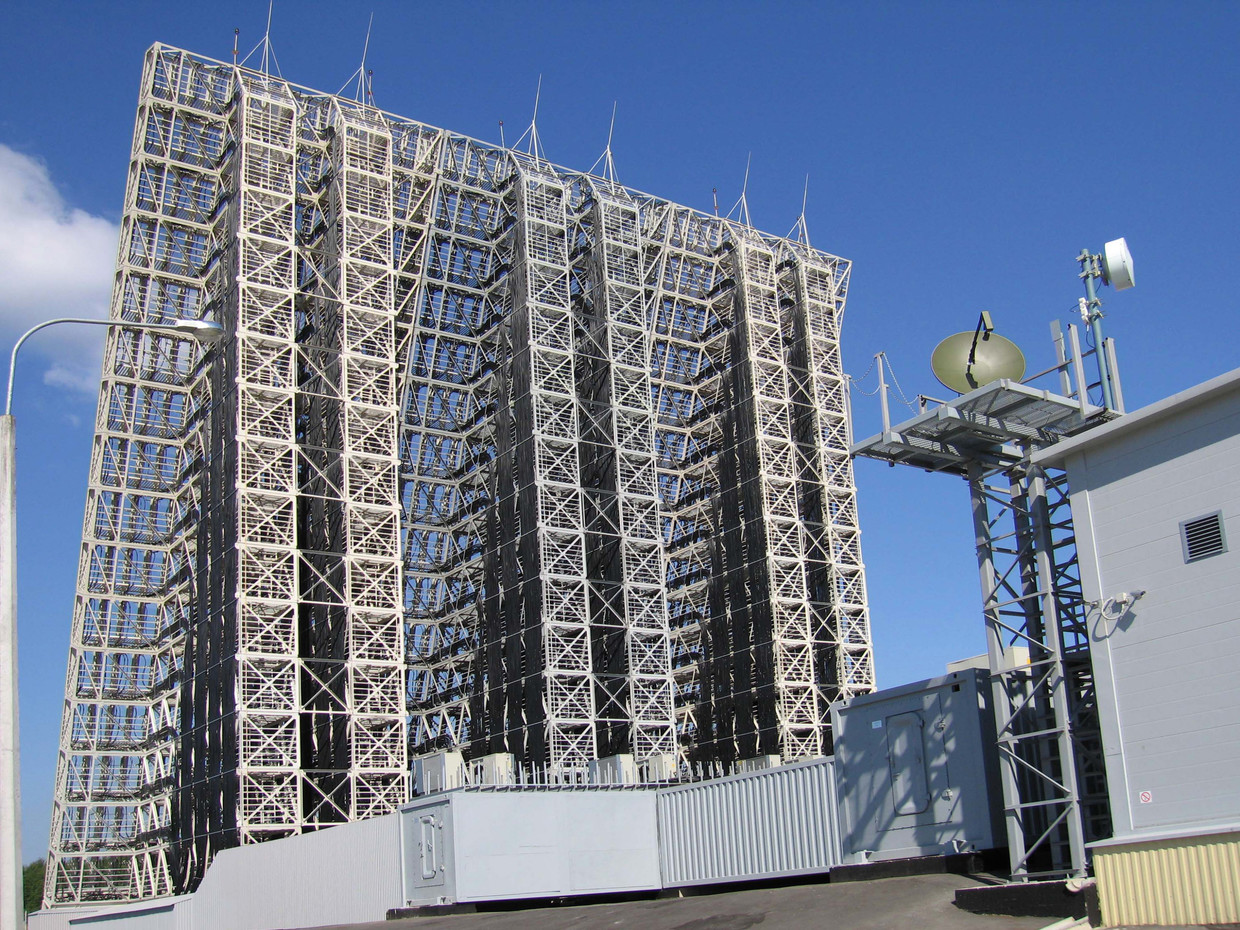 The experimental N-17 Duga-I OTH radar was deployed near the city of Nikolayev in the 1960s. Although it failed to fully meet the expectations of the military, the installation served as a proof-of-concept, showing that it was possible to detect a relatively weak signal amid a much more intensive background clutter. The system was also configured to automatically adapt to changes in the reflective properties of the ionosphere and to filter out strong sources of noise radiation.

The combat-worthy 5N32 Duga was ready to enter service in 1971. The first radar was deployed in Ukraine, with the receiving antenna placed 10km away from the Chernobyl nuclear power plant, and the transmitting antenna located near the town of Lubech in Chernigov Region. The second was installed in the Far East, near the town of Bolshoi Kartel outside of Komsomolsk-on-Amur.

They managed to detect American space rockets launched at Cape Canaveral. Following multiple upgrades, the Duga was able to provide consistent detection of Space Shuttle launches and Titan ballistic missiles from Cape Kennedy – 7,000-9,000km away. Nevertheless, all attempts to detect Minuteman missile launches from Vandenberg Air Force Base via the polar section of the ionosphere were in vain.

Despite the success, the Soviet OTH program had to give way to the space-based ballistic missile launch early warning technology. Some influential military specialists who were involved in the OTH research were skeptical about its merits. But the Duga project still yielded many practical achievements that were later used in the development of the next-generation OTH systems.

The space component of the ICBM launch early-warning system is pretty good at detecting launches from US soil. But it is not capable of getting the coordinates for targets. In the early 1990s, over-the-horizon radar technology became relevant again, but there was no point in replicating the gigantic antennas after the fall of the Soviet Union. So, Russian engineers began developing the next generation of OTH radar. Due to budgetary constraints, most of the work was done in the late 1990s and early 2000s.

The Container (29B6) 2-coordinate OTH radar was created by the Scientific and Research Institute for Long-Distance Radio Communication (NIIDAR). The equipment can be stored in transport containers and delivered anywhere, reducing the need for on-site construction work.

The radar section of the system includes two antennas – the transmitter and the receiver. Each is provided with its own control area and a personnel housing unit. The control equipment includes antenna-feeder systems, communications and other hardware. The receiver antenna array consists of over 140 antenna masts, each 34m high (about the height of a 10-story building). The station detects and tracks all aerodynamic targets, including small planes, within a 240 degree arc.

The 29B6 OTH radar was reported as deployed for trials near the town of Kovylkino in Mordovia in December 2013. This is where the receiving antennas and main processing equipment were located. The transmitting antennas were located outside Gorodets in Nizhny Oblast.

This was the first OTH radar capable of monitoring airspace up to a range of over 3,000km. Its coverage included airspace over Poland, Germany, and the Baltics all the way to Turkey, Syria, and Israel.

Unlike the Duga, the Container’s signal is reflected by the ionosphere only once, allowing for more accurate target detection. This allows it to track even small planes over Western Europe. The station can detect a mass launch towards Russia of cruise missiles, deployments of aircraft and hypersonic cruise missiles, when they are ready.

By 2018, the Container system was significantly improved. In early December, the Ministry of Defense announced that upgraded OTH radar is now on trial duty in Russia’s Mordovia region. In six months, it is expected to be fully operational and enter regular service.

Basically, the same location was used for the deployment of a new OTH radar station that is far superior to the old Container (29B6). The new station has a larger detection zone. Now it is capable of discovering aerodynamic targets in a 240-degre arc, compared to 180 degrees for the old system. The computing systems and tracking stability have been improved significantly.

The new Container radar is capable of detecting and tracking over 5,000 air targets simultaneously. It can also track a small plane right on the runway, or detect launch and track the warhead of short or intermediate range ballistic missiles, which have smaller radar cross-sections than their intercontinental cousins.

There is one more important thing. When hypersonic aircraft and short- and intermediate-range missile warheads fly at high altitudes, an ionization signature forms around them in the form of a compression wave in front and an ionization wake behind. This makes them easier to detect by OTH radar already trained to analyze the state of the ionosphere.

Russia’s eastern over-the-horizon monitoring hub is supposed to be built in the next two years. A location to deploy the Container radar has already been scouted and chosen in the town of Zeya, Amur Oblast. The military is already producing the necessary equipment.

This new Container radar station will monitor the Pacific region from Kamchatka to New Zealand and China. It will cover the airspace down to just above water, which will enhance our capabilities to detect missiles destroyers and aircraft carrier strike groups.

The OTH coverage will complement traditional radar stations of the upgraded Voronezh type, which serve as part of Russia’s ICBM launch early warning system. And last but not least, there are the Podsolnukh coastal OTH radars. Podsolnukh is surface-wave radar capable of detecting naval targets up to 300km away and air targets up to 450km away, as long as they fly over the water. They too are an important part of the country’s defense capabilities.