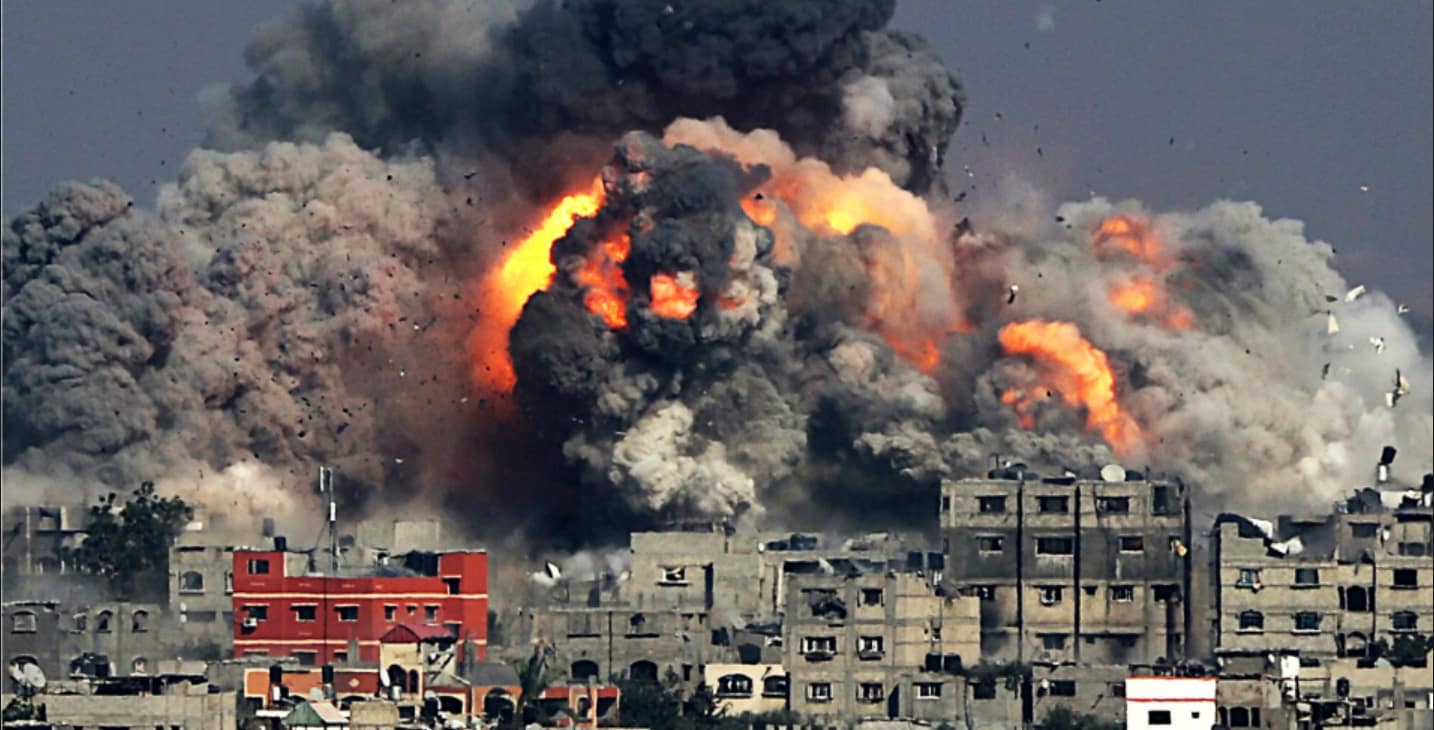 Ken Livingstone is an English politician, he served as the Mayor of London between 2000 and 2008. He is also a former MP and a former member of the Labour Party.
Having fought to get a deal between the IRA and Britain for over a decade before that was achieved, I can’t see any difference with the current situation in between Israelis and Palestinians in the Middle East.

Israel is just under a year away from its next election. The prime minister, Benjamin Netanyahu, came close to being forced out of office last month when his coalition partner, the defense minister Avigdor Lieberman, resigned his position. Lieberman’s resignation was triggered by Netanyahu’s refusal to launch a more brutal attack against the Palestinians following their alleged rocket attacks against Israel.

Lieberman’s defection left Netanyahu’s coalition with just a majority of one in the 120-member Israeli parliament. Whilst most expected Netanyahu’s government to collapse, so far he has managed to hang on and it looks like he will be the first Israeli government for thirty years to serve out its full term although there are current police investigations of allegations of corruption against both the prime minister and his wife.

All this takes place against a background of a massive ramping up of controversy around the Israeli government. President Trump’s decision to switch the American embassy to Jerusalem caused international controversy and so far only the government of Guatemala has taken the same decision, although the strongly pro-Israel prime minister of Australia is planning to do the same thing. Whilst this caused massive media coverage there was much less reporting of Trump’s decision to cut all US funding for the UN’s support for Palestinian refugees which will have a devastating effect for five million Palestinians whose schools, social services, and health care have been funded by this UN programme. 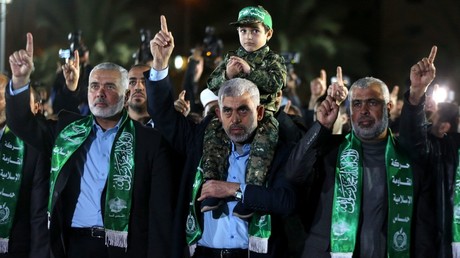 Following Trump’s decision, European countries led by Germany and supported by several Arab nations have said they will increase their financial donations for the UN’s Palestinian refugee support. The trouble is America was providing a third of the UN’s agency $1.1 billion budget. Trump’s actions are widely seen as an attempt to force the Palestinians to back down on their demand for the right of the refugees to return to the homes from which they were driven out seventy years ago.

Nikki Haley, the then US ambassador to the UN, said she thought that it should “Get the right of return off the table… I do agree with that… I absolutely think we have to look at right of return.” The right of Palestinians to return to their homeland has been a key issue in the Middle East peace process for decades, following the 1948 Arab Israeli war which saw 700,000 Palestinians fleeing or being driven out of their homeland.

The issue of the Palestinian refugees was barely mentioned in the media in the aftermath of the 1948 war, when we were told that the creation of the state of Israel had been “a land without a people for a people without a land”. It was only a decade and a half after the war that I first saw in a television programme which referred to the issue of the Palestinian refugees. The next day at work all my colleagues were expressing their surprise at this programme as none of them had known about the plight of the Palestinians. But many are still in denial about this problem. The notorious right-wing columnist Melanie Phillips, in an article in the Jewish Chronicle defended Israel’s record saying “Every accusation hurled at it is untrue. Displaced the indigenous people of the land: untrue… acts illegally: untrue. Racist, apartheid, colonialist state: untrue. Disproportionately aggressive: untrue. Contemptuous of the lives of innocent Palestinians: untrue.” Amazingly she went on to argue that it was a ‘wicked falsehood’ that Israeli’s army deliberately killed peaceful demonstrators at the Gaza border, even though this was shown on television all around the world.

The truth about the treatment of the Palestinians back in 1948 was revealed in 2004 when the brilliant Professor Benny Morris of Ben-Gurion University gave an interview in the New Left Review. As Israel’s leading historian on the origins of Palestinians refugees, the Israel army had let him see their confidential files.

In an interview with the Israeli paper Haaretz Morris said “There were far more Israeli acts of massacre than I had previously thought… Also many cases of rape… Units of the Haganah (predecessor of the Israeli army) were given operational orders that stated explicitly that they were to uproot the villagers, expel them and destroy the villages themselves… The worst cases were Saliha (70 to 80 killed), Deir Yassim (100-110), Lod (250)… Officers… understood that the expulsion order they received permitted them to do these deeds… No one was punished for these acts of murder, Ben-Gurion (Israel’s prime minister 1948 to 1954 and 1955 to 1963) silenced the matter. He covered up the officers who did the massacres… the commander of the northern front Moshe Carmel issued an order in writing to his units to expediate the removal of the Arab population. Carmel took this action immediately after a visit by Ben-Gurion… There is no doubt in my mind that this order originated with Ben-Gurion. Just as the expulsion from the city of Lod which was signed by Yatzhak Rabin was issued immediately after the Ben-Gurion visited the headquarters. From April 1948 Ben-Gurion is projecting a message of transfer. The officer corps understands what is required of them.”

Also on rt.com ‘Gap too wide’? Trump’s Israeli-Palestinian peace plan ‘a waste of time,’ says justice minister Morris, who had once been on the left wing, justified these actions: “Without the uprooting of the Palestinians, a Jewish state would not have arisen here… There is no justification for acts of massacre. Those are war crimes. But in certain conditions, expulsion is not a war crime.” When the reporter asked him to justify the “long and terrible column of the fifty thousand people expelled from Lod” Morris said “There are circumstances in history that justify ethnic cleansing… But when the choice is between ethnic cleansing and genocide – the annihilation of your people – I prefer ethnic cleansing… a Jewish state would not have come into being without the uprooting of seven hundred thousand Palestinians. These are small war crimes.”

Asked if the remaining Palestinians in Israel should be expelled, Morris replied: “I say not at this moment… but the Israeli Arabs are a time bomb… I think there is a clash of civilisations here… the Arab world as it is today is barbarian… within the next twenty years there could be an atomic war here.”

These interviews created a torrent of criticism from supporters of Israel and Morris withdrew all his claims but I have always believed he was telling the truth. The problem has grown as millions of Palestinians now live in appalling conditions in Gaza and other refugee camps around the Arab world. The idea that this problem would go away was wrong. Following the triumph of the Israeli army, Prime Minister Ben-Gurion said “Not one refugee will return. The old will die. The young will forget.” Ben-Gurion always ignored the advice of his foreign secretary that this was a problem that had to be dealt with and at least some Palestinians should be allowed to return. Seventy years on, we have millions of Palestinian refugees living in conditions that will help to fuel support for terrorism.

In the coming Israel election there needs to be an honest debate about the legacy of Israel’s expulsion of the Palestinians. Clearly Netanyahu is unlikely to make any concessions on this issue, and one of the great tragedies in Israel’s past was the assassination of Prime Minister Yitzhak Rabin following his conclusion of a treaty with the Palestinian leader Yasser Arafat. When Rabin secured this deal it looked like the first step towards an end to the long conflict between the Israelis and the Palestinians, but just a few weeks later he was assassinated by a far right extremist and none of Rabin’s successors have had the courage or strength of character to bring this conflict to an end.

Also on rt.com Israeli fighter jets strike dozens of Gaza targets as 300 rockets rain down on towns (VIDEOS) I believe it could be possible for a new Israeli government to come to a deal with Hamas who defeated the Arafat-founded Fatah in the last Palestinian elections over a decade ago. Many denounce Hamas as just a terrorist organisation, but I remember the same situation here in Britain back in the 1980s when Prime Minister Thatcher was refusing to negotiate with the IRA who she dismissed as murderers and psychopaths. But then in 1998 Tony Blair achieved his greatest political success by negotiating a peaceful deal with the IRA which brought an end to that terrible conflict.

When I visited Israel in 1986 I was impressed by this dynamic and democratic society. I was also struck by the fact that the Palestinians seemed to be the most open and cosmopolitan of all the Arab nations. It’s time for the long promised two state solution to be brought into play but with one vital addition. The dynamism of the Israeli economy should be opened up to create one economic unit covering Israel and Palestine with Israelis employing Palestinians and vice versa. Many will say I am being naïve but having fought to get a deal between the IRA and Britain for over a decade before that was achieved I can’t see any difference with the current situation in the Middle East. We need an Israeli prime minister with the vision and courage to deliver the sort of deal that was Blair’s greatest political legacy.