Home Investigations We Need An Outbreak of Common Sense 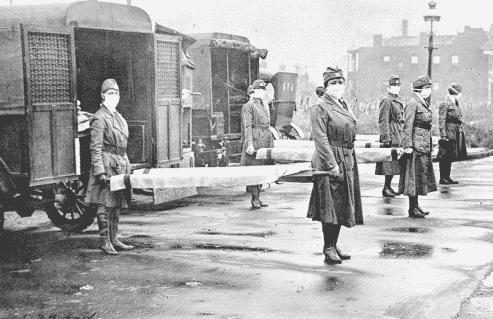 Epidemics, Fear and Denial: How Every American Is Threatened

Epidemics can happen naturally or through neglect—or they could be caused deliberately. Biological warfare is probably the very worst weapon of mass destruction

This is the one hundredth anniversary of the great influenza pandemic of 1918. In his book The Great Influenza, John M. Barry described it as the deadliest plague in history. It killed more people in a year than the Black Death of the Middle Ages killed in a century.

The lack of a vaccine did not cause the flu. All epidemics start with an index case—which may or may not be identified. The great influenza may have begun in a patient in Kansas. The significance of the case was reportedly recognized by a country doctor, who was ignored. As the nation mobilized for World War I, and draftees from across the country were thrown together, illness spread and became much more virulent. Transport ships became “floating caskets.” Troop trains were “rolling coffins.” But Woodrow Wilson denied the existence or severity of the epidemic, and effective public health efforts were thwarted.

Despite this history, and the expenditure of billions of dollars, the U.S. is not much better prepared than in 1918. There have been warnings, such as Ebola, severe acute respiratory distress syndrome (SARS), novel H1N1 flu, and the 2014 outbreak of enterovirus D68 in schoolchildren. But when the threats recede, the nation goes back to sleep.

When different populations are thrown together, as in boot camp or college dorms when new freshmen arrive, there is a lot of sickness. Each group has a different pattern of colonizing microorganisms to which its members have immunity and others do not. There are terrible historical examples of native populations in the New World being devastated by diseases of European settlers.

Epidemics can happen naturally or through neglect—or they could be caused deliberately. Biological warfare is probably thevery worst weapon of mass destruction.

One scenario is to embed a suicide agent incubating a deadly disease in a mass of migrants. Or there are doubtlessly innocent persons infected with deadly diseases to which Americans have no immunity among thousands of migrants overwhelming our border—from Central America and many other places.

The mainstream press and even part of mainstream medicine promotes denial. For example, an NBC News article quotes Dr. Paul Spiegel, who directs the Center for Humanitarian Health at Johns Hopkins School of Public Health: “There is no evidence to show that migrants are spreading disease.” The danger of introducing disease is “a false argument used to keep migrants out.” The article even quotes a study that purportedly shows that hepatitis, tuberculosis and HIV “generally only spread within the affected immigrant communities and not to the wider population.” Perhaps there is an invisible shield between an infected migrant and an American but not between him and someone newly arriving from his country?

No, that term is for those who don’t believe that we can change the climate and save the Planet by cutting off energy from the fuels that power 80 percent of the world’s economy. The supposed mainstream of media and organized medicine insists that “climate change”—catastrophic and human-caused—is the existential public health threat that eclipses all others. Let’s have uncontrolled migration, but tight global control of essential fuels.

Is concern about the caravan just “fearmongering”?

We don’t hear that term applied to those who say we must treat a child missing some mandated vaccines as a “Typhoid Mary” and bar him from schools or doctor’s offices—even though nobody ever caught a disease from a child that wasn’t infected with it. Rather, that’s the word for those who warn about tropical diseases, even if they are much more common and deadly than indigenous measles. Or for those concerned about tattooed MS-13 gang members, rapists, jihadists, human traffickers, and other criminals intent on harming Americans. Such people also infect, molest, assault, or murder people in their own countries and in the caravan.

Our nation faces real threats that produce genuine body counts from violence and disease. Instead, we are supposed to worry about carbon dioxide, invisible dust particles, and imperceptible phobias and isms. Not just worry, but shut down industries and shut out dissenters from public discourse.

A wall is indeed proposed—to confine the half of America that votes the “wrong” way and wants to protect American lives, liberties, and property.
We need an outbreak of common sense.

Jane M. Orient, M.D. obtained her undergraduate degrees in chemistry and mathematics from the University of Arizona in Tucson, and her M.D. from Columbia University College of Physicians and Surgeons in 1974. She completed an internal medicine residency at Parkland Memorial Hospital and University of Arizona Affiliated Hospitals and then became an Instructor at the University of Arizona College of Medicine and a staff physician at the Tucson Veterans Administration Hospital. She has been in solo private practice since 1981 and has served as Executive Director of the Association of American Physicians and Surgeons (AAPS) since 1989. She is currently president of Doctors for Disaster Preparedness.Since 1988, she has been chairman of the Public Health Committee of the Pima County (Arizona) Medical Society. She is the author of YOUR Doctor Is Not In: Healthy Skepticism about National Healthcare, and the second through fourth editions of Sapira’s Art and Science of Bedside Diagnosis published by Lippincott, Williams & Wilkins. She authored books for schoolchildren, Professor Klugimkopf’s Old-Fashioned English Grammar and Professor Klugimkopf’s Spelling Method, published by Robinson Books, and coauthored two novels published as Kindle books, Neomorts and Moonshine. More than 100 of her papers have been published in the scientific and popular literature on a variety of subjects including risk assessment, natural and technological hazards and nonhazards, and medical economics and ethics. She is the editor of AAPS News, the Doctors for Disaster Preparedness Newsletter, and Civil Defense Perspectives, and is the managing editor of the Journal of American Physicians and Surgeons.