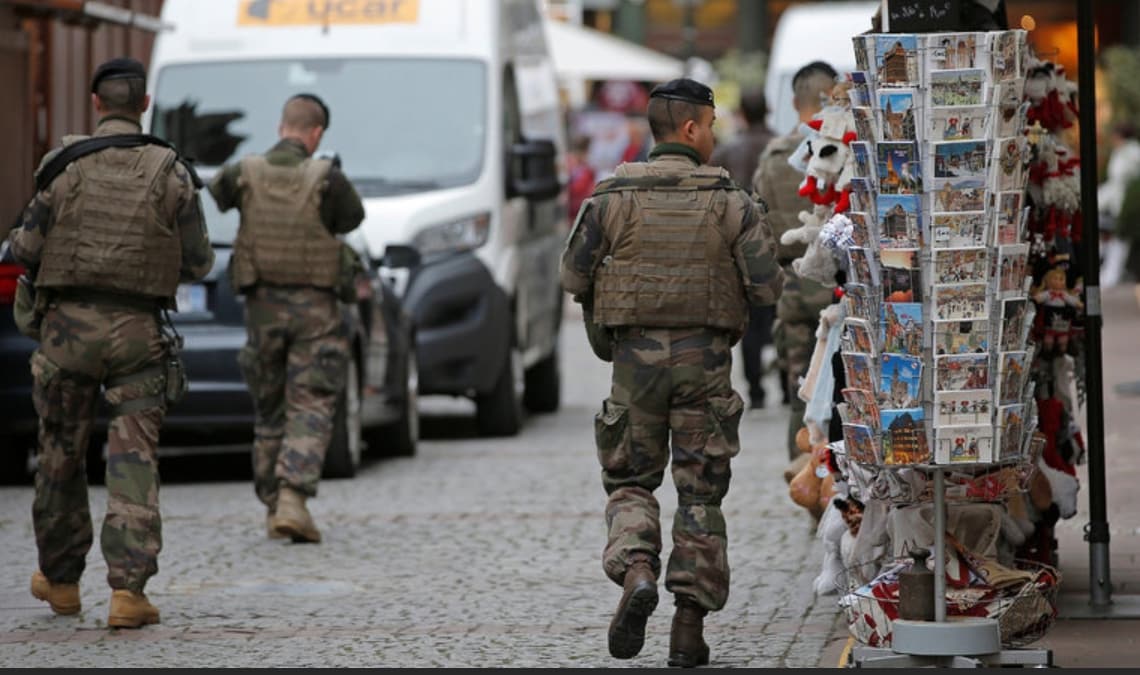 On Tuesday evening, a brazen terror attack occurred in the French city of Strasbourg, claiming three lives and injuring a dozen, six of whom are said to be in critical condition. The suspect was known to police as an Islamic extremist and has been identified as 29-year-old Cherif Chekatt.

The suspected shooter evaded capture from a police dragnet and is still on the run, prompting fears of a follow-up attack. The suspect was shot and injured by soldiers guarding the Christmas market in Strasbourg, but escaped in a hijacked taxi.

Cherif Chekatt is said to be on a watch-list of around 26,000 people, of whom 10,000 are believed to have been radicalized. He had previously served prison sentences in France and Germany for common law offences and fought twice with security forces.

It’s worth noting that although the Western powers are ostensibly fighting a war against terrorism, they had worked hand-in-glove with the Islamic jihadists from 2011 to 2014 to topple the hostile regimes of Qaddafi in Libya and Bashar al-Assad in Syria.

In line with their foreign policy, Britain, France and Germany gave a free hand to the Islamic jihadists and their patrons based in those countries to wage proxy wars against the governments in Libya and Syria. France was particularly vulnerable because it has a large Muslim diaspora from its former North African colonies.

The seven-year-long conflict in Syria that gave birth to scores of militant groups, including the Islamic State, and after the conflict spilled across the border into neighboring Iraq in early 2014 was directly responsible for the spate of Islamic State-inspired terror attacks in Europe from 2015 to 2017.

Since the beginning of the Syrian conflict in August 2011 to June 2014, when the Islamic State overran Mosul and Anbar in Iraq, an informal pact existed between the Western powers, their regional Sunni allies and jihadists of the Middle East against the Shi’a Iranian axis. In accordance with the pact, militants were trained and armed in the training camps located in the border regions of Turkey and Jordan to battle the Syrian government.

This arrangement of an informal pact between the Western powers and the jihadists of the Middle East against the Iranian axis worked well up to August 2014, when the Obama administration made a volte-face on its previous regime change policy in Syria and began conducting air strikes against one group of Sunni militants battling the Syrian government, the Islamic State, after the latter overstepped its mandate in Syria and overran Mosul and Anbar in Iraq from where the US had withdrawn its troops only a couple of years ago in December 2011.

After this reversal of policy in Syria by the Western powers and the subsequent Russian military intervention on the side of the Syrian government in September 2015, the momentum of jihadists’ expansion in Syria and Iraq stalled, and they felt that their Western patrons had committed a treachery against the Sunni jihadists’ cause, that’s why they were infuriated and rose up in arms to exact revenge for this betrayal.

If we look at the chain of events, the timing of the spate of terror attacks against the West was critical: the Islamic State overran Mosul in June 2014, the Western powers began conducting air strikes against the Islamic State’s targets in Iraq and Syria in August 2014, and after a lull of almost a decade since the Madrid and London bombings in 2004 and 2005, respectively, the first such incident of terrorism occurred on the Western soil at the offices of Charlie Hebdo in January 2015, and then the Islamic State carried out the audacious November 2015 Paris attacks, the March 2016 Brussels bombings, the June 2016 truck-ramming incident in Nice, and three horrific terror attacks took place in the United Kingdom within a span of less than three months in 2017, and after that the Islamic State carried out the Barcelona attack in August 2017.

More to the point, the dilemma that the jihadists and their regional backers faced in Syria was quite unique: in the wake of the Ghouta chemical weapons attacks in Damascus in August 2013, the stage was all set for yet another no-fly zone and “humanitarian intervention” a la Qaddafi’s Libya; the war hounds were waiting for a finishing blow and then-Turkish foreign minister, Ahmet Davutoglu, and the former Saudi intelligence chief, Bandar bin Sultan, were shuttling between the Western capitals to lobby for the military intervention. Francois Hollande had already announced his intentions and David Cameron was also onboard.

Here it should be remembered that even during the Libyan intervention, the Obama administration’s policy was a bit ambivalent and France under the leadership of Sarkozy had taken the lead role. In Syria’s case, however, the British parliament forced Cameron to seek a vote for military intervention in the House of Commons before committing the British troops and air force to Syria.

In the end, France was left alone as the only Western power still in favor of intervention; at that point, however, the seasoned Russian foreign minister, Sergei Lavrov, staged a diplomatic coup by announcing that the Syrian regime was willing to ship its chemical weapons stockpiles out of Syria and subsequently the issue was amicably resolved.

Turkey, Jordan and the Gulf Arab states, the main beneficiaries of the Sunni Jihad against the Shi’a-led government in Syria, however, had lost a golden opportunity to deal a fatal blow to their regional rivals.

To add insult to the injury, the Islamic State, one of the numerous Sunni Arab militant outfits fighting in Syria, overstepped its mandate in Syria and overran Mosul and Anbar in Iraq in 2014, from where the US troops had withdrawn only a couple of years ago in December 2011.

Additionally, when the graphic images and videos of Islamic State’s executions surfaced on the internet, the Western powers were left with no other choice but to adopt some countermeasures to show that they were still sincere in pursuing their dubious “war on terror” policy; at the same time, however, they assured their Turkish, Jordanian and Gulf Arab allies that despite fighting a war against the maverick jihadist outfit, the Islamic State, the Western policy of training and arming the so-called “moderate” Syrian militants will continue apace and that Bashar al-Assad’s days were numbered, one way or the other.

Moreover, declaring the war against the Islamic State in August 2014 served another purpose too: in order to commit the US Air Force to Syria and Iraq, the Obama administration needed the approval of the US Congress which was not available, as I have already mentioned, but by declaring a war against the Islamic State, which is a designated terrorist organization, the Obama administration availed itself of the war on terror provisions in the US laws and thus circumvented the US Congress.

But then Russia threw a spanner in the works of NATO and its Gulf Arab allies in September 2015 by its surreptitious military buildup in Latakia that was executed with an element of surprise unheard of since General Rommel, the Desert Fox. And now Turkey, Jordan, the Gulf Arab states and their jihadist proxies in Syria find themselves at the receiving end in the Syrian conflict.

Keeping this background of the quagmire created by the Western powers in Syria and Iraq to appease their regional allies, Israel and the Gulf states, in mind, it becomes amply clear that the Western powers are not sincere in pursuing their dubious war on terror policy as they have worked hand-in-glove with the Islamic jihadists in the Middle East.

Then how is it possible that a terror attack has occurred in Strasbourg when the Yellow Vests demonstrations have taken France by storm, which are demanding reduction in fuel tax, the reintroduction of wealth tax on large businesses, the raising of the minimum wage, and the resignation of the former investment banker and current President of France, Emmanuel Macron.

The only beneficiary of the Strasbourg shooting, it appears, is none other than the French government itself, because after the incident, the government would now put restrictions on freedom of assembly and all kinds of political demonstrations.

Thus it is quite likely that the French deep state might have instigated one of jihadists on its payroll to carry out the Strasbourg atrocity to break the momentum of the Yellow Vests protests, which have posed the single biggest threat to the elitist Macron administration since coming to power last year.