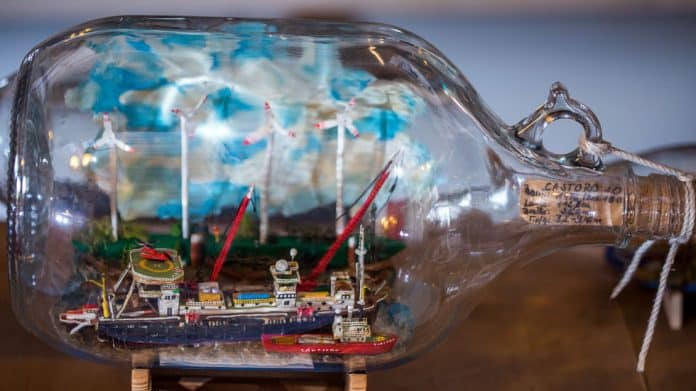 [ Editor’s Note: I would have expected this to have come out of the Senate, but maybe it is a last gasp, lame duck Republican Congress getting one more whack in on Russia and the EU together – a “two fer”.

But I can’t get over the wording that if the US feels the EU is endangering its own energy security, (i.e., by not buying higher cost US LNG gas instead), then it can simply sprinkle the “national security” fairy dust and start sanctioning EU companies in allied countries involved in the pipeline.

Mass media has been low key about Israel’s future plans to sell its offshore gas to Southern Europe, and hence wants to block the Russians out; yet the Russians kiss Israeli’s behind 90% of the time. Tel Aviv announced plans to build an ambitious, long pipeline.

We also see the long term plan for the Gulf States, who are considering running their own gas pipeline to the EU via Israel, as everybody anticipates an eventual gas glut, where lower transportation costs give you an edge on securing long term contracts with the high volume customers.

As we get to the close of 2018, we are already gearing up for one hell of a new year. General Flynn’s world just changed with this three-year prison sentence, despite Mueller advising none.

I suspect that Flynn’s lawyers pointing to his patriotic record as reason to give him parole, was viewed in a totally opposite way – the judge deciding that because of that record, he deserved to be punished more, to which I agree.

Hopefully we will get more details with the judge’s written decision. But the word is out that if those cooperating can get time like this, then those going down with Trump will get even more, some of that due to the obstruction of justice charges.

That would send a long needed message to the powerful that having their gang coordinate subverting the judicial system is just going to dig themselves into a deeper hole. Someone please pass me a shovel and an energy drink … Jim W. Dean ]

The US House of Representatives is once again calling on the European Union to ban the Russia-led construction of the Nord Stream 2 natural gas pipeline and has called for sanctions against the project.

The resolution was passed by the Republican-led Congress during Monday’s session. Echoing US President Donald Trump’s rhetoric against the construction of the undersea pipeline, the lawmakers called it “a drastic step backward for European energy security and United States interests.”

The House now wants the US president to step in and even impose economic penalties under the Countering America’s Adversaries Through Sanctions Act (CAATSA).

Moscow has repeatedly stressed that all Washington’s attempts to hamper the project are simply driven by economic reasons and are a shining example of unfair competition. Reacting to the latest House motion, Kremlin spokesman Dmitry Peskov said there is nothing new in this “unacceptable” position.

He added that the project is purely economic and serves not only Russia’s interests as a gas supplier, but Germany as an EU member-country and its consumers in the first place.

The $11 billion Nord Stream 2 pipeline is set to deliver Russian natural gas to European consumers. The pipeline is set to run from Russia to Germany under the Baltic Sea and is expected to double the existing pipeline’s capacity to 110 billion cubic meters.

The pipeline, controlled by a subsidiary of Russian energy giant Gazprom, is being built in cooperation with German energy firms Wintershall and Uniper, French multinational Engie, Anglo-Dutch Royal Dutch Shell, as well as Austria’s OMV.

Europe seems to be reluctant to ditch the project despite US pressure and criticism. On Monday, Austria’s OMV energy group CEO Rayner Zele stated that the company is set to continue financing the pipeline next year. OMV has already invested some 531 million euros ($607 million) into the project, Zele told Ria Novosti.

In early December, German Foreign Minister Heiko Maas also said that Berlin’s abandoning the project would not make sense as Russia will still go on with it. Germany earlier rebuked Trump’s criticism of the project after the US leader accused Berlin of being a “captive” of Moscow citing Germany’s alleged dependency on natural gas from Russia.