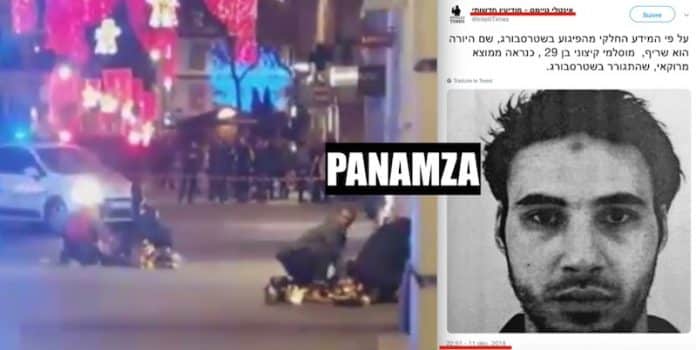 Readers of my False Flag Trilogy know that Israel’s fingerprints are all over the most spectacular recent “terrorist attacks” in France, including the Mohamed Merah affair, the Charlie Hebdo spectacular, the 11/13/15 follow-up, and the 2016 Nice truck attack. So it shouldn’t surprise us that the perfectly timed (for Macron) Strassbourg Christmas market shooting looks like yet another Zionist PR stunt. The intended beneficiary: Rothschild puppet Macron, who was about to collapse under the next wave of yellow jacket protests when news of Strassbourg saved his political posterior. (Temporarily, we hope.)

The best French alternative news source, Panamza.com, just published an article headlined “The first to be informed about the Strassbourg attack were Israelis“:

Regular readers of Panamza will not be surprised by the recurrence of an anomaly systematically ignored by the traditional media: once again, confidential details concerning the alleged perpetrator of this terrorist attack were first disclosed by Israelis and anonymous accounts committed to Israel.

“On Tuesday evening, at 22:51 (just three hours after the fact and well ahead of the international press) Ronen Solomon, an allegedly “independant analyst” in Israel in the field of intelligence and satellite imagery (and former journalist employed by a friend of Netanyahu) was the first Twitter influencer (based in Tel Aviv) to broadcast the photo and Cherif Chekatt’s age. Disturbing detail: he has since deleted his tweet despite its having been massively circulated (and saved, time in support, in the screenshot visible above, by Panamza).

“Nine minutes later (at 23h), BNL News, a pseudo-American info site (but committed to Israel and anti-Hamas) also posted the picture, shared massively on Twitter. Then at 23:03, it was the turn of the Israeli “Rosanna” (yes, the one who had twice hyped an expected Daesh attack against yellow vests) to post the photo.

“Final example: the case of Jean-Patrick Grumberg, a Judeo-activist and Franco-American-Israeli journalist of the anti-French and anti-Arabic website Dreuz. Grumberg, who is close to the Franco-Israeli agent of influence Gilles-William Goldnadel, has written a particularly detailed article containing confidential information on Cherif Chekatt late Tuesday night.” (Panamza.com)

Why are Israeli black ops PR outlets always the first to publicize hitherto-unknown details of “Islamic terror” attacks? The iconic Charlie Hebdo “cop shot on sidewalk” footage broadcast all over the world was filmed by a pre-positioned Israeli asset (who later apologized to his spymasters for recklessly tweeting it before realizing that it showed the cop NOT getting shot); likewise with the 11/13/15 attacks, where Israeli PR operatives got into position 20 minutes before the “jihadist” explosion at the Comptoir Voltaire.

Below is a relevant passage from the third and final volume of my False Flag Trilogy:

“Meanwhile in Europe, the other principle bastion of what passes for Western civilization, back-to-back anti-Islam false flags in Nice, France and Munich, Germany were both recorded and propagandized by the same Israeli-Mossad-linked photographer. Richard Gutjahr, a cameraman whose wife Einat Wilf is a leading Israeli operator, was pre-positioned on a balcony in Nice to film the beginning of the July 14, 2016 truck attack. Gutjahr’s iconic footage was heavily promoted in the global media; no mainstream journalists bothered to ask why Gutjahr happened to be on that balcony and for no discernable reason began to film what must have appeared to be an ordinary truck before it had begun to mow people down.

“Then on July 22, Gutjahr was apparently once again in the right place at the right time, photographing the Munich, Germany shopping mall shooting and posting the images to his Twitter account—then taking down the images, which simultaneously disappeared from a Russia Today report, just minutes after being exposed in a VT article by this author.570

“Gutjahr’s wife Einat Wilf is a former Israeli Intelligence Officer in Unit 8200 who served as foreign policy advisor to Shimon Peres. She is a strategic consultant to MacKenzie and Co. in New York, and a general partner in Core Venture Capital in Israel. In 2007 she ran for the presidency of the World Jewish Congress.571 The claim that such a person’s spouse’s apparent foreknowledge of two back-to-back terror attacks can be accounted for by coincidence would boggle the mind of the craziest coincidence theorist.

“Gutjahr is hardly the only apparent Israeli agent pre-positioned to crank out anti-Islam propaganda in the wake of spectacular terror events. On September 11th, 2001, former Israeli Prime Minister Ehud Barak, who had stepped down in March 2001 and come to America “to oversee the terror attacks of 9/11” in the words of journalist Christopher Bollyn, was in the BBC Studios in London just minutes after news of the airliner crashes broke, purveying what became the official story and calling for US invasions of Afghanistan and Iraq.572 Like Gutjahr on the balcony in Nice, Barak can hardly have found himself in the BBC studios at that moment, fully prepared with the official conspiracy theory and details about upcoming wars, by coincidence.

“Likewise, the Naudet brothers, surmised by some to be French Jews and likely Israeli agents,573 were able to miraculously capture the only footage of the first 9/11 attack plane hitting the North Tower. Studies of their famous 9/11 video shows that they must have carefully chosen the location—one of the very few spots in Manhattan where such a shot would be possible—well in advance, and carefully rehearsed the seemingly spontaneous panning motion so as to be prepared to film the iconic image of the initial attack. The odds of such footage being captured by luck, especially in 2001 when video cameras were far from ubiquitous, are effectively zero.574

“Jules and Thomas Naudet were not the only apparent Israeli agents pre- positioned to film the attacks on the Twin Towers. Five so-called “dancing Israelis”—Sivan and Paul Kurzberg, Oded Ellner, Omer Marmari, and Yaron Schmuel—were spotted in multiple locations filming and wildly celebrating the successful 9/11 attacks. The five men, two of them positively identified as Mossad agents, were subsequently arrested by the NYPD, held for 71 days, administered lie detector tests (which they failed) and finally sent back to Israel at the behest of suspected Israeli agent Michael Chertoff, then head of the Criminal Division of the Justice Department.575 “Witnesses reported they had set cameras PRIOR to the first plane strike, and were seen congratulating one another afterward.”576 Police confirmed the Israelis’ apparent foreknowledge of the attacks to mainstream media: “It looked like they knew what was going to happen when they were at Liberty State Park” (set up in advance to film).577 The Israelis laughed and cheered, taking trophy pictures of each other flicking cigarette lighters in front of the burning and exploding Towers where 3,000 people were dying.

“Back home in Israel, the men appeared on national television and bragged that they had been sent to New York “to document the event.”578 How could they have known there would be an event to document, and where and when to set up to film it? Obviously they were working for the team that orchestrated the event. There is no other possible explanation.

“Like 9/11, Nice, and Munich, the January 7 2015 Charlie Hebdo massacre, November 13 2015 Paris attacks, and the March 22 2016 Brussels Airport attacks all featured pre-positioned publicists who appeared to be Israeli agents…”