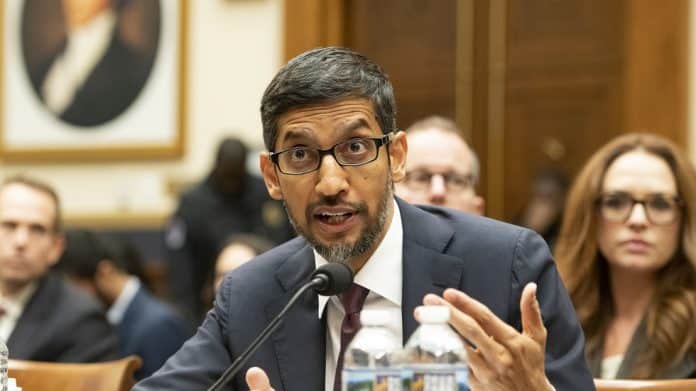 ‘$4,700 on Google ads – that’s it? We never found evidence of Russian collusion’

[ Editor’s Note: The House Judiciary Committee showed some poor staff work, with New York Congressman Nadler sleep-walked into a closet in this story. Expecting to have a chance to nail the Google CEO on a Russia meddling question, he instead got an unpleasant surprise.

This is evidence that Nadler was never a prosecuting attorney, as you never ask someone a question in open court that you don’t already know the answer to. Sundar Pichai’s answer that Google’s investigation had only found $4,700 of ads purchased from Russian sources was a cream pie in Nadler’s face.

If Nadler had wanted to be briefed by VT, we would have told him that no Intelligence agency or connected operation would have tried to influence an election via easily traced Google ad purchases. They would get fired for stupidity or thrown off a bridge to discourage others from being so dumb.

The back story in this whole fake House investigation is why no one ever asks, or is asked the open question of, “What country do you think is meddling the most in US elections, undermining the foundations of our democracy?”

The answer to that of course would be Israel, and most members of the committee, if not all, will have received financial support from the Israeli Lobby or support in kind, like air time on Fox News, which some senior Intel think has more than casual links to Israel.

Sorry folks, we can’t get our taxpayer money back when a Congressional Committee gets led around like a cow with the ring through its nose. We deserve better. Maybe if Mr. Nadler got a bunch of calls on this, he would pay more attention. But if they did not come from his district, he would not care.

We will not be better represented until we can find a way to force them to do it, despite the strings that other powerful entities have on them. So, we have a lot of work to do when we can’t outbid or out threaten our opponents.

But with the Dems going after Trump via the House Committees next year, they are indirectly going after Israel, as Trump is Bibi’s “butt boy”, a term Mika Brzezinski used on the air this week that seems to have gotten her in a bit of trouble with her network for using an improper term. Because of her dad, they could not fire her, so she got by with an on-air apology. Being privileged sure is nice.

Congress, law enforcement, and US Security orgs will have a shadow hanging over them as long as they give Israel a free pass to conduct massive espionage inside the US, with the added indignity of the taxpayer being tasked to pay for it, ten years in advance. How did we come so far, to go so low, as to take this lying down? … Jim W. Dean ]

The goal of ‘Russian collusion’ hearings is not the truth – the Democrats are still trying to explain the people who gave a lot of money to Hillary Clinton why she lost, Lionel told RT.
–

The CEO of Google, Sundar Pichai, gave some specific numbers on alleged Russian meddling in the 2016 US election as he was questioned by the US House Judiciary Committee on Tuesday.

“Does Google now know the full extent to which its online platforms were exploited by Russian actors in the election two years ago?” New York Democratic Rep. Jerry Nadler asked Pichai.

We undertook a very thorough investigation, and, in 2016, we now know that there were two main ad accounts linked to Russia which advertised on Google for about $4,700 in advertising.

Google, along with Facebook and Twitter, have been under scrutiny for the past two years over the Russian meddling claims. The companies have extensively probed the activity Russia-linked accounts, but no direct proof of meddling has been revealed so far.

Legal and media analyst Lionel said that the latest testimony by Google casts doubt over the entire investigation.

“This was their star witness, Google, they could have done so much, had he said the right thing,” he said.

“Jerrold Nadler, Democrat head at House Judiciary Committee, the same committee that is going to immediately try to impeach President Trump – this was his moment once and for all to have the head of Google to come and say ‘yes, there was enormous pressure, influence and ads on the part of the ‘Russians.’ That is it – $4700?

And he furthermore said that in some of the other ads that were purchased they had nothing to do with Hillary Clinton or Donald Trump per se, but dealt with larger issues. That was the story that the mainstream corporate media never mentioned,” he continued.

Being a lawyer, Lionel suggested if he had the head of Google as a witness and he knew he is going to testify that there was less than $5,000 in ads by the “Russians”, he would have not asked him that question: “I would have passed or I would have let someone else talk to him. I would not have brought that up.”

Lionel explained that the role and the goal of this investigations and hearings “is not the truth”:

The bigger question is why these people still persist when since 2016 they have not found one example, not one bit of evidence, not one centile of fact showing that Russia actually significantly affected the election: not influenced, not sowed discord, not made people think but actually changed numbers, changed data – something substantial. That is what I think when I think of collusion. We never found any of that and they are still asking the question today.

He is puzzled “when will the Democrats, in particular, leave this ridiculous issue alone and go on to running the country doing things for [a] constituency, for citizens and voters, that matter – infrastructure, health care, crime. Why are they insisting upon trying to dig up something in an issue when there is nothing there?”

According to Lionel, the reason why the Democrats are still trying to find some evidence of Russian collusion or interference is to explain how Hillary Clinton had lost the election.

“She had to explain to a lot of rich and powerful people who were very angry at her, who gave her a lot of money, she made a lot of promises that she was going to win.”

Lionel reminded that the definition of insanity is doing the same thing over and over and expecting a different result: “I don’t know how many times the Democrats need to be told there was no Russian collusion.”