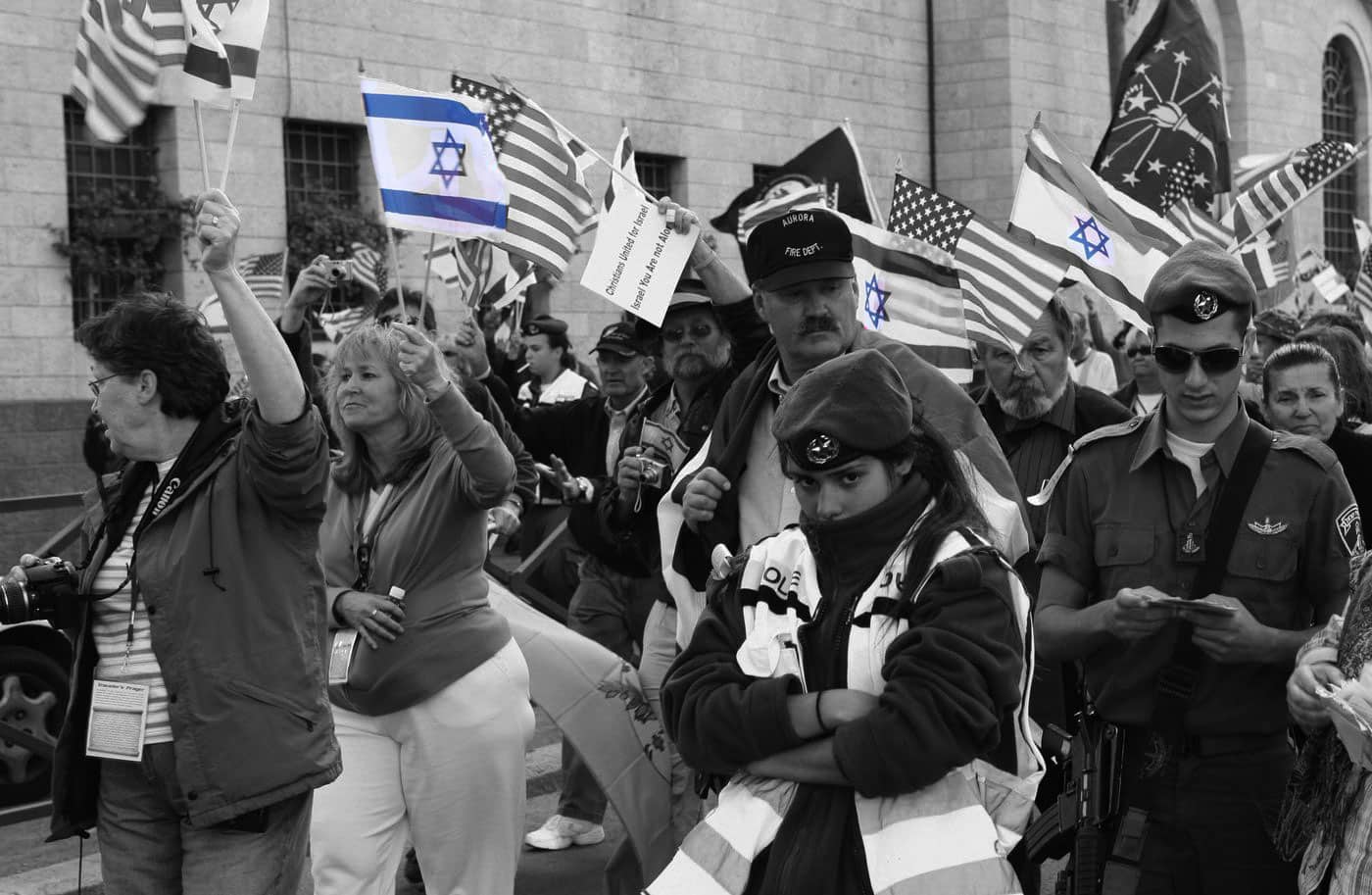 By Henry Kamens for VT and New Eastern Outlook, Moscow

It appears that many fundamentalist Christians support the hard-line policies of the Israeli Government (currently consisting of the parties Likud, United Torah Judaism, Shas, Kulanu, and the Jewish Home) more blindly and fanatically than most Jews do. Christian and Jewish Zionist organizations in the US have combined their lobbying efforts, their targets being governors and state legislatures.

Approximately 26 states – more than half – have enacted laws or executive orders to prohibit their state governments from awarding contracts to companies that support the BDS program, the Boycott, Divestment, and Sanctions against Israeli program. This BDS movement uses boycott-related tactics against Israel or the Israeli-Occupied Territories in an attempt to get Israel to stop oppressing the Palestinians.

This is where American politicians interact with international issues and lobby groups. For instance, Kentucky Republican Gov. Matt Bevin, a Christian fundamentalist, issued an executive order on November 16, 2018, that states that “the Commonwealth of Kentucky unequivocally rejects the BDS practices and stands firmly with Israel,” noting that these BDS practices “threaten the sovereignty and security of a US ally and friend of the Commonwealth.”

Israeli Ambassador Ron Dermer and Consul General of Israel to the Southeast United States, Judith Varnai Shorer, and Dave Wicker, Congressional Liaison for Christians United for Israeli (CUFI) joined Governor Bevin at the signing ceremony of this order in the State Capitol building. The event was presented as if they, the people of Kentucky, and the United States, were collectively making a moral stand in support of the State of Israel.

Politicians such as Governor Bevin have called the BDS movement anti-Semitic and “repugnant.” He referenced passages from the Book of Ezekiel about being a watchman, saying Kentucky was watching and sounding the alarm.

In reality, however, the BDS movement is a nonviolent way to support the Palestinian cause in light of illegal Israeli settlements, the seizure of Palestinian land, and the blatant refusal to abide by many UN resolutions over the years. Israel has effectively made Gaza into the world’s largest prison, yet forbids the inmates to even protest against this. Hundreds of nonviolent Palestinian protesters have been shot dead by Israeli troops in 2018 alone.

Bevin is not alone. Many want to paint the movement in the same way, but not in terms of taking a moral stand but because it is not politically expedient to use sanctions against the UN-created Jewish State.

The Israeli Lobby in the US is highly-motivated, well-organized, and willing to contribute to the campaigns of politicians who oppose the BDS movement and vote for anti-Palestinian state and federal laws. But in reality, all such legislation has more to do with governors and political types looking for campaign contributions and thus caving in to pressure from the well-funded Israeli lobby, than anything else.

President Trump gave the Israeli Lobby a major victory when he moved the US Embassy from Tel Aviv to Jerusalem – apparently without considering any of the geopolitical implications and ramifications of international law. He actually implemented a previously unimplemented US policy by “illegally” making Jerusalem, for all practical purposes, the legal capital of Israel.

Taking up the Palestinians’ side, however, is musician Roger Waters, who was one of the founders of Pink Floyd and has been a strong supporter of BDS. He has lobbied his fellow pop stars not to perform concerts in Israel.

Waters has openly called Israel an apartheid state. He has compared its government’s PR to Nazi propaganda efforts and claimed that Israel is the worst human rights offender in the world. And that was before recent events in Gaza, starting in March 2018, and the bloody and deadly crackdown on Palestinian protestors.

Ian Halperin, an Israeli film producer, launched a personal counterattack against Roger Waters in a new documentary he entitled “Wish You Weren’t Here.” Apparently, this production has more to do with standing up for the political status quo than protecting Jews. With a case of high-powered speakers, the documentary paints Waters as an anti-Semite.

A CNN commentator, Marc Lamont Hill, was recently fired after making a speech at a United Nations conference in which he called for “international action that will give us what justice requires, and that is a free Palestine from the river to the sea.” The reaction was immediate, with CNN firing him for telling the truth, a commodity CNN has distanced itself from in recent years.

It must be noted that he was not speaking on behalf of CNN, but only as an American writer and lecturer in communications at Temple University in Philadelphia. The speech was given at an appropriate venue, the International Day of Solidarity with the Palestinian People Special Meeting at UN Headquarters on November 28, 2018.

Several Jewish journalists and Israeli Consul Dani Dayan immediately called Dr. Hill’s remarks anti-Semitic, but you can judge this for yourself after listening to the actual speech before the UN body. Consul Dayan tweeted that Hill’s remarks were like a “swastika painted in red,” whilst the Anti-Defamation League said they were tantamount to calling for Israel to be wiped off the map.

Marc Lamont Hill had told his assembled international audience, “Our solidarity must be more than a noun; our solidarity must become a verb.” Recalling the multiple tactics and strategies employed by the black community against Jim Crow laws and slavery in the United States, he called for embracing the movement to adopt boycotts, divestment and sanctions against Israel.

Moreover, he said, solidarity means recognizing the Palestinian right to self-defense, stressing that Palestinians must not be shamed for resisting in the face of state violence and ethnic cleansing.

Hill was fired by CNN the very same day. It is no longer possible to take a stand that is not in step with the Jewish lobby and the American political elites, including Donald Trump.

Gideon Levy, wring in the Jewish newspaper Haaretz, said, “In a matter of hours, the skies collapsed into well-orchestrated hysteria. Seth Mandel, an editor of the Washington Examiner, accused Hill of having called for Jewish genocide; Ben Shapiro, an analyst on Fox News, called it an anti-Semitic speech.”

Gideon Levy concluded: “The Jews and Israel have an incredible degree of influence in the Western media.” Now you can call me, too [the author] an anti-Semite as well, and using Gideon’s language – a self-hating Jew, to boot.

Hill presented a vision deeply rooted in universal human rights, in which Palestinians can gain freedom just as other people have. He made particular reference to the history of the Black struggle against American state-sponsored racism, Jim Crow, and apartheid.

Hill called for the support of boycotts because they are a time-honored nonviolent tactic, which can be used to hold Israel accountable. For some, he likely came across as a hybrid of Martin Luther King, Malcolm X and Yasser Arafat, but those people’s problem is that, in the US, this cannot be used against him.

In light of current efforts to also have him fired from his university teaching position, Witold Walczak told the Philadelphia Inquirer, “Under the First Amendment, Temple University cannot punish an employee for making off-the-job statements that it might disagree with. It’s not complicated.”

After apologizing for some of his remarks, Hill has made a number of public statements perhaps designed to keep his position at Temple. “I talked about the need to return to the pre-1967 borders, to give full rights to Palestinian citizens of Israel and to allow the right of return. No part of this is a call to destroy Israel,” he said.

He pushed back against the criticism he has received, saying that he did not support anti-Semitism and that the “river to the sea” reference was a “call for justice” – both in Israel and in the West Bank/Gaza. “I support Palestinian freedom. I support Palestinian self-determination. I am deeply critical of Israeli policy and practice. I do not support anti-Semitism, killing Jewish people, or any of the other things attributed to my speech. I have spent my life fighting these things.”

But still, various Zionist organizations and rabid politicians continue to condemn him, and are urging [at the least] for the university where he is employed “to strongly condemn Marc Lamont Hill’s dangerous calls for violence against Israelis and the destruction of Israel and to fire Hill immediately, or at least suspend him from the prestigious Steve Charles Chair that he holds.”

But the most vocal accusers are the same Christians who speak of love and forgiveness, who nevertheless spout headlines such as “CNN Commentator Marc Lamont Hill Calls for the Eradication of Israel.”

Millions of fundamentalist Christians support Israel because it says in the Bible (Revelations) that Christ will return after the Temple in Jerusalem is rebuilt, and the Israeli government is rebuilding it. Using the scriptural reference in this way supports the essential con of so-called “fundamentalism” – that as long as you can quote scripture to support your position, even if your interpretation of that scripture has been derided for the past two thousand years, you are automatically right and justified, regardless of your conduct.

There is nothing in the actual teaching of Christ which supports such a position – indeed; he attacked the Jews of His day for saying exactly the same. But one only needs to read the articles and comments in many Christian press articles to gain insight into the mentality and collective mindset of many fundamentalist Christians. In their view, the Palestinians, who are also mostly Christians, are getting in the way of progress, and in order to oppose them, we can just forget everything Jesus taught.

Regardless of which side of this argument you take, one thing is certain – Hill made a hell of a speech. It was even better than anything Obama gave, and if a good speech can get you a Nobel Prize for Peace, Hill should get one for speaking truth to power. Fundamentalists Christians may consider themselves above secular powers, but Marc Lamont Hill might be catching them up.