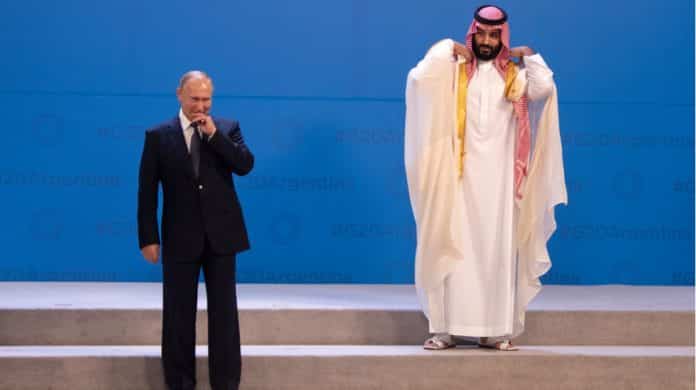 Forces are aligning against Saudi Arabia’s Crown Prince, lead by elements within the CIA and strong players in the mainstream media. But what is really behind this deterioration in relationship, and what are its implications?

Following the brutal murder of Washington Post columnist Jamal Khashoggi, western media and various entities, including the CIA, appear to have turned their back on Saudi Crown Prince Mohammad Bin Salman (MBS). In response to the scandal, the Guardian released a video which its celebutante, Owen Jones, captioned“Saudi Arabia is one of the biggest threats on Earth. Time to stop propping up its repulsive regime.”

The Guardian was not alone in its condemnation. “It’s high time to end Saudi impunity,” wrote Hana Al-Khamri in Al-Jazeera. “It’s time for Saudi Arabia to tell the truth on Jamal Khashoggi,” the Washington Post’s Editorial Board argued. Politico called it “the tragedy of Jamal Khashoggi.”

Even shadowy think-tanks like the Council on Foreign Relations (CFR) and the Atlantic Council released articles criticising Saudi Arabia in the wake of Khashoggi’s death.

A number of companies began backing away from Saudi money after the journalist’s death, including the world’s largest media companies such as the New York Times, the Economist’s editor-in-chief Zanny Minton Beddoes, Arianna Huffington, CNN, CNBC, the Financial Times, Bloomberg, Google Cloud CEO, just to name a few.

Also on rt.com US Senate passes resolution blaming Saudi Prince MBS for Jamal Khashoggi murder The CIA concluded that MBS personally ordered Khashoggi’s death, and was reportedly quite open in its provision of this assessment. Antonio Guterres, secretary-general of the UN, also took time out of his schedule to express concern over Saudi Arabia’s confirmation of the killing.

At the time of the scandal, former CIA director John Brennan went on MSNBC to state that the Khashoggi’s death would be the downfall of MBS. Furthermore, the US Senate just voted in favour of ending American involvement in Saudi Arabia’s war in Yemen (a somewhat symbolic victory, though this is a topic for another article), but nonetheless was a clear stab at MBS personally.

The only person who appeared to continue to uphold America’s unfaltering support for MBS, even after all the publicly made evidence against MBS, was the US president himself. So after years of bombarding Yemen, sponsoring terror groups across the Middle East, Asia, the Pacific and beyond, why is it only now that there has been mounting opposition to Saudi Arabia’s leadership? Let’s just bear in mind that western media had spent years investing in a heavy PR campaign to paint MBS as a “reformer.”

Former national security adviser under Barack Obama’s second term, Susan Rice, wrote an article in the New York Times, in which she called MBS a “partner we can’t depend on.” Rice concludes that MBS is “not and can no longer be viewed as a reliable partner of the United States and our allies.” But why is this? Is it because MBS is responsible for some of the most egregious human rights abuses inside his own kingdom as well as in Yemen? Is it because of MBS’ support for groups such as ISIS and al-Qaeda? No, according to Rice, we “should not rupture our important relationship with the kingdom, but we must make it clear it cannot be business as usual so long as Prince Mohammad continues to wield unlimited power.”

“I think ultimately this is going to come out. And it’s very important for us to maintain the relations with Saudi Arabia. And if it’s Mohammed bin Salman who’s the cancer here, well, we need to be able to find ways to eliminate the cancer and to move forward with this relationship that is critical to regional stability and our national interests.”

In reality, this is probably the issue that western media and government advisors have taken up with MBS. Aside from the fact he allegedly held a huge hand in the brutal murder of one of their own establishment journalists (Saudi Arabia reportedly tortured and killed another journalist not long after Khashoggi, but western media was eerily silent on this incident) MBS is not opposed for his reckless disregard for human rights. With insight into Rice’s mindset, we actually learn that if the US were to punish MBS, he would be likely to “behave more irresponsibly to demonstrate his independence and exact retribution against his erstwhile Western partners.”

You see, the problem with MBS isn’t that he is a mass murdering war criminal, it is that he is too “independent” for the United States’ liking.

Last week, Saudi Arabia and the other major oil producers met in Vienna at the year’s final big OPEC meeting of the year. As Foreign Policy notes, Saudi Arabia remains the largest oil producer inside OPEC but has to contend with the US and Russia who are “pumping oil at record levels.” Together, the three countries are the world’s biggest oil producers, meaning any coordinated decision made between these three nations can be somewhat monumental.

However, it appears that one of these three nations will end up drawing the short end of the stick as the other two begin forming a closer alliance. As Foreign Policy explains:

“But Saudi Arabia has bigger game in mind at Vienna than just stabilizing oil prices. Recognizing that it can’t shape the global oil market by itself anymore but rather needs the cooperation of Russia, Saudi Arabia is hoping to formalize an ad hoc agreement between OPEC and Moscow that began in 2016, a time when dirt-cheap oil also posed a threat to oil-dependent regimes. That informal agreement expires at the end of the year, but the Saudis would like to make Russia’s participation with the cartel more permanent.”

Also on rt.com ‘The thing is done’: Khashoggi killing tape indicates hit squad was briefing Riyadh, report says Russian officials have been signalling their intention to formalise this agreement for quite some time now. Given the hysteria in western media about any and all things Russian, it is not too much of a stretch to suggest that this is the kind of news that is not sitting too well with the powers-that-be.

Earlier this year, Russia and Saudi Arabia announced that it would “institutionalize” the two-year-old bilateral agreement to coordinate oil production targets in order to maintain an edge on the global market.

While US president Trump has been supportive and incredibly defensive of MBS during this “crisis”, the truth is that the US only has itself to blame. It was not all too long ago that Trump announced that he had told Saudi King Salman that his kingdom would not last two weeks without US support.

Saudi Arabia is learning for themselves quite quickly that, ultimately, it may pay not to have all its eggs in one geopolitical superpower basket.

Saudi Arabia has been increasingly interested in Moscow since King Salman made a historic visit to Moscow in October 2017. While Trump has openly bragged about his record-breaking arms deals with the Saudis, the blunt truth is that the $110 billion arms agreements were reportedly only ever letters of interest or intent, but not actual contracts. As such, the US-Saudi arms deal is still yet to be locked in, all the while Saudi Arabia is negotiating with Russia for its S-400 air defence system. This is, as the Washington Post notes, despite repeated US requests to Saudi Arabia for it disavow its interest in Russia’s arms.

The economic threat that an “independent” Saudi Arabia under MBS’ leadership poses to Washington runs deeper than meets the eye and may indeed have a domino effect. According to CNN, Russia and Saudi Arabia “are engaged in an intense battle over who will be the top supplier to China, a major energy importer with an insatiable appetite for crude.”

The unveiling of China’s petro-yuan poses a major headache for Washington and its control over Saudi Arabia as well. According to Carl Weinberg, chief economist and managing director at High-Frequency Economics, China will “compel” Saudi Arabia to trade oil in Chinese yuan instead of US dollars. One must bear in mind that China has now surpassed the US as the “biggest oil importer on the planet,” these direct attacks on the US dollar will have huge implications for its current world reserve status.

Also on rt.com ‘Smoking saw’: After CIA briefing, Senators confident MBS behind Khashoggi killing If Saudi Arabia jumps on board China’s petro-yuan, the rest of OPEC will eventually follow, and the US might be left with no choice but to declare all of these countries in need of some vital freedom and democracy.

Therefore, ousting MBS and replacing him with a Crown Prince who doesn’t stray too far from the tree that is US imperialism may put a dent in pending relationships with Saudi Arabia and Washington’s adversaries, Russia and China.

Once we get over the certainty that the US media and the CIA are not against MBS for his long-list of human rights abuses, the question then becomes: why – why now, and in this manner, have they decided to put the spotlight on MBS and expose him exactly for what he is.

Clearly, the driving force behind this media outrage is a bit more complex than first meets the eye.