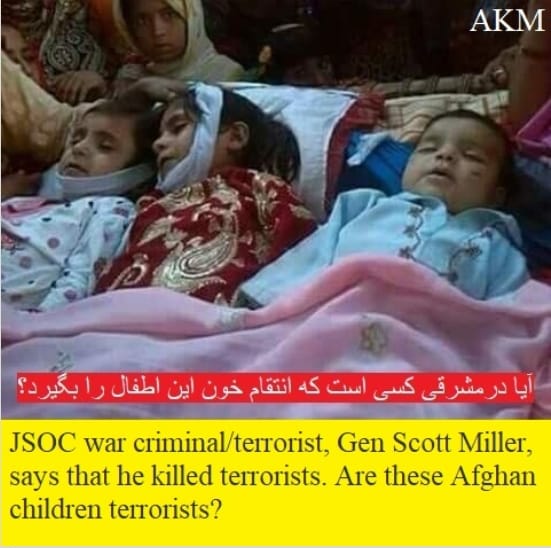 I strongly believe that as long as the United States, NATO and its Afghan partners/puppets/agents continue to escalate the bombing, targeting and killing of Afghan/ Pashtun villagers especially women and children, the Afghan villagers should not sit at a table and talk peace. The United States’ and NATO’s massacring of the Afghan/Pashtun villagers must stop first, which must be a precondition to any talks.

Since the U.S. government has appointed a billionaire war profiteer Khalilzad, and JSOC war criminal/terrorist, Gen Scott Miller, the war crimes against and the genocide of the Pashtun villages especially during the night time have escalated. The Trump Administration’s and General Miller’s escalation of the war and the targeting of Afghan/Pashtun villagers will not lead to peace in Afghanistan. Actions speak louder than words.

The upcoming so-called “peace” talks in Pakistan are for show only. It is widely known by Afghans, that the CIA is holding certain Afghan village women in CIA black spot prisons to force the Afghan resistance to these “fake” peace talks. This tactic certainly will not lead to peace. Fake talks will not lead to peace.

The U.S., NATO and its selected Afghan Administration must stop targeting, bombing and killing with the United State, new weapons Afghan/Pashtun civilians in their villages. Without a stop to this massacring of Afghan/Pashtun villagers there can be no peace. 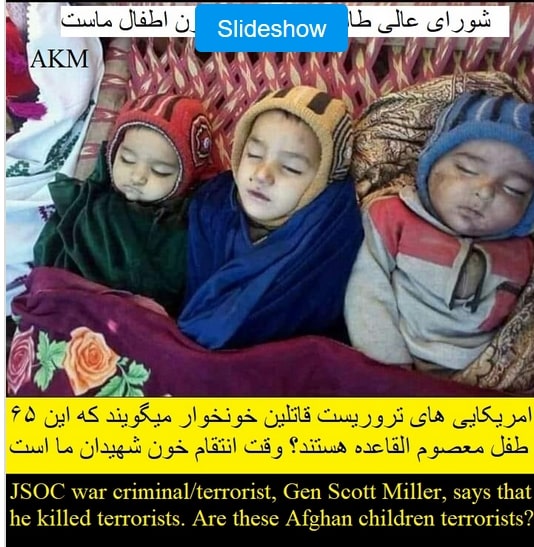 On Friday, December 13, 2018, the United States with its JSOC, private mercenaries and an Afghan Commando Team targeted, dropped bombs and used new weapons on four villages in the Shigal District of Kunar Province. At least 67 civilians were massacred with most being innocent women and children.

The U.S. and its partners and puppets also killed civilians in Paktia, Nangarhar, Kunduz, Ghazni Farah, Kandahar, Logar and Helmand Province a few days before. 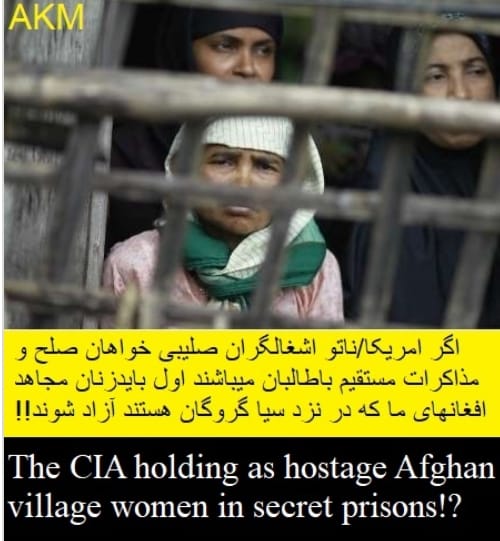 Except for Al Jazeera, which briefly covered the tragedy, the media is silent about these war crimes.

I strongly find it alarming that the United States does not allow journalists to be on the ground in these areas in Afghanistan to document the war waged by the United States and its partners, puppets and agents.. The media is silent about these war crimes. UNAMA in Kabul has done nothing and is silent about these war crimes and human rights violations. 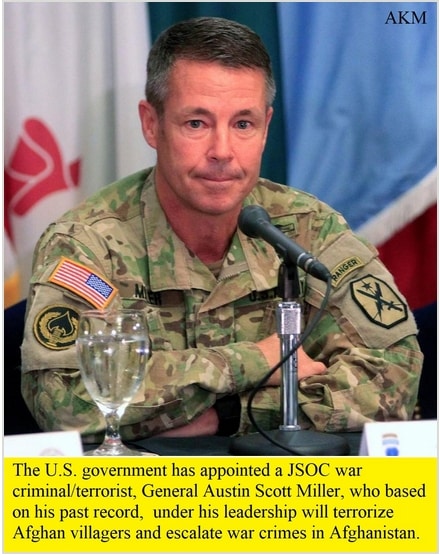 The light needs to be shone on these war crimes and human rights violations. Someone has to be the voice of these innocent Afghan /Pashtun villagers massacred in there homes just recently and almost everyday during these past 17 years.

These most recent war crimes and human rights violations need to be in the news covered by journalists, investigated by the United Nations and other human rights organizations and those responsible prosecuted in lawful tribunals. Without justice there can be no peace. 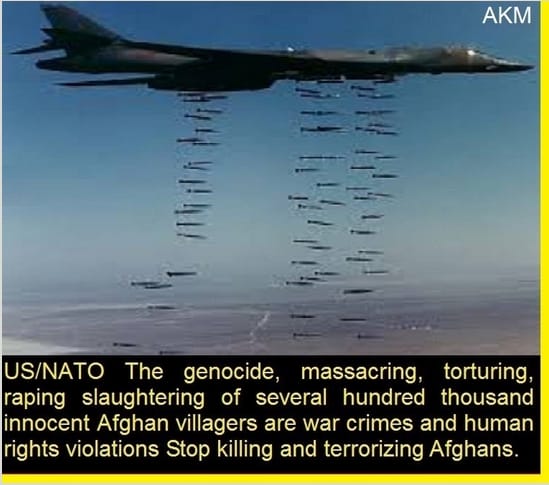 The United States, NATO, the Afghan puppet Administration, private mercenaries and others, who have committed war crimes in Afghanistan during these past seventeen years need to be prosecuted in lawful tribunals.

It includes former President George W. Bush, Vice President Cheney, President Obama, NATO Secretary General and other top officials and military leaders in their administrations, who are responsible for the war in Afghanistan. I believe all war criminals from 1979 to the present need to be prosecuted. 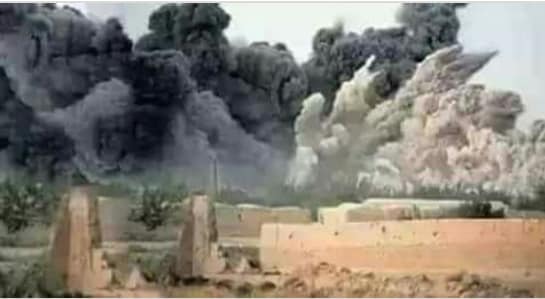 These war criminals, Afghan and American, whoever they are and whatever positions or jobs they hold, including the executive office, must be prosecuted in lawful tribunals for these crimes. Afghan victims, just like the Bosnians, Rwandans, the Jewish people etc, have a right to justice. Unfortunately, as we have witnessed in Afghanistan during these past four decades, without justice there can be no peace.

The United Nations, good Americans and all good citizens of the world must wake up and demand justice for these Afghan victims, who are in the darkness and have no voices.

The Afghan villagers want peace, but there cannot be peace without justice, which requires that first there be an end to the U.S. war and occupation of Afghanistan. There also must be transparency, investigations, accountability, prosecutions, justice and humanity by the United States and NATO forces. There must be an end to their war crimes. The U.S. and NATO must accept its loss in Afghanistan.

These horrendous war crimes committed against the Afghan people by the JSOC and Australian special operation forces, by the United States and its agents/mercenaries and by NATO forces are the true impediment or roadblock to negotiations and peace. It is not the Afghan Freedom Fighters. Would it be rationale for an Afghan villager to eagerly sit at a peace negotiations table with the perpetrators of these war crimes?

Would it be rationale to expect an Afghan villager/freedom fighter, whose child was killed, wife raped, culture disrespected, home invaded, home bulldozed, village bombed, religion disrespected, natural resources and treasures stolen, and a country occupied, to eagerly sit to negotiate peace with the perpetrators of those crimes?

There needs to be an immediate end to war crimes, an immediate end to the war and occupation and there must be a true seeking of justice before rationally there can be peace. The war mongers/war profiteers/occupiers /perpetrators of these war crimes in Afghanistan demand everything of their Afghan victims, they require nothing of themselves. Without justice there can be no peace.

During these past seventeen years, the U.S. with its war strategy, has terrorized Afghan women and children in the villages. Everyday Afghan women and children, especially the Pashtun, are raped, kidnapped, tortured, bombed, their houses demolished, their Rare Earth Elements and other natural resources exploited, imprisoned for political views, forced into prostitution, and killed. In many spots in Afghanistan, the U.S. especially its CIA, holds Afghan women in secret detention centers. The United States has and is committing war crimes against the Afghan villagers.

The majority ethnic group, the Pashtun, who are the natives, who live in areas rich with Rare Earth Elements, are being ethnically cleansed and genocide is occurring. A peace conference is not gong to stop this terror. There has to be an end to the U.S. war and occupation, which has been escalated by the Trump Administration.