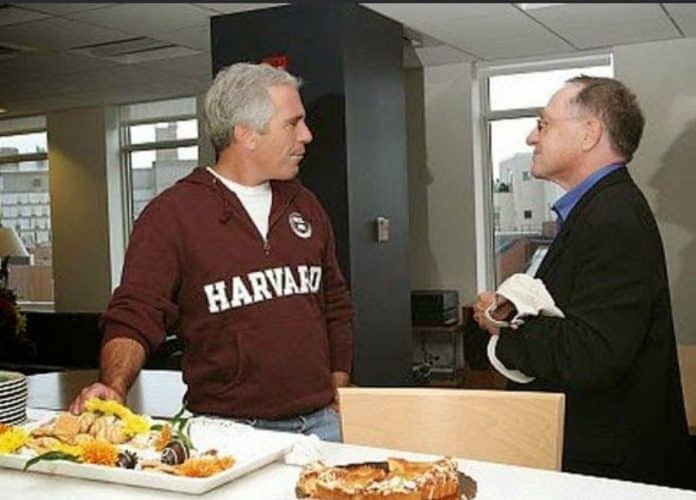 The revelation regarding Sarah Ransome’s allegations against the 80-year-old lawyer who represented the notorious sex offender is included in a public transcript available in Manhattan Federal Court.

Ransome has sued Epstein and his alleged madam, Ghislaine Maxwell, saying they trafficked her for sex from 2006 to 2007, while she was in her 20s.

“(Ransome) has alleged not only that my client ran a sex trafficking organization but she claims also that she was directed by my client and the Epstein defendants to have sex with third parties, including Alan Dershowitz, for example,” Menninger said.

Ransome alleges in her suit that even as Epstein used an army of powerful attorneys — including Dershowitz — to fight a sex trafficking investigation in Florida, he continued “transporting young females” in New York.

The expose of a lifetime, still so much less than we deserve, is in the current Miami Herald and available.  We are putting the link here.  Go there, read and watch it all and fill in the blanks.

In this case it was that Epstein used his girls with visitors and videoed it for the Mossad to use for human compromise and political blackmail.

The article ignored Giselle Maxwell daughter of one of Israel’s biggest spies, all the secret satanic underground pedo and torture chambers to sacrifice children, which have been demoed because Epstein and his controllers expect the whole pedo thing to come out in 2019 during the coming Israel-gate flareup.

Check Google.  The Mossad has scrubbed the hundreds of photos with Epstein and Gizelle Maxwell with Donald Trump.

It is my view that the COL has decided to cut loose their main cutout Israel and the Likudists because the Vatican has decided to take control of Israel and build a new temple. Supposedly a secret agreement was signed which authorizes the Vatican to manage the City of Jerusalem and all surrounding areas. We shall see.  Gordon and Jim

A decade before #MeToo, a multimillionaire sex offender from Florida got the ultimate break.

It was an unusual meeting for the then-38-year-old prosecutor, a rising Republican star who had served in several White House posts before being named U.S. attorney in Miami by President George W. Bush.

Instead of meeting at the prosecutor’s Miami headquarters, the two men — both with professional roots in the prestigious Washington law firm of Kirkland & Ellis — convened at the Marriott in West Palm Beach, about 70 miles away. For Lefkowitz, 44, a U.S. special envoy to North Korea and corporate lawyer, the meeting was critical.

His client, Palm Beach multimillionaire Jeffrey Epstein, 54, was accused of assembling a large, cult-like network of underage girls — with the help of young female recruiters — to coerce into having sex acts behind the walls of his opulent waterfront mansion as often as three times a day, the Town of Palm Beach police found.

At this home on El Brillo Way in Palm Beach, young girls, recruited by other young girls, would arrive by car or taxi, be greeted in the kitchen by a member of Jeffrey Epstein’s staff and ascend a staircase. They were met by Epstein, clad in a towel.
Emily Michot [email protected]

The eccentric hedge fund manager, whose friends included former President Bill Clinton, Donald Trump and Prince Andrew, was also suspected of trafficking minor girls, often from overseas, for sex parties at his other homes in Manhattan, New Mexico and the Caribbean, FBI and court records show.

Facing a 53-page federal indictment, Epstein could have ended up in federal prison for the rest of his life.

But on the morning of the breakfast meeting, a deal was struck — an extraordinary plea agreement that would conceal the full extent of Epstein’s crimes and the number of people involved.

Not only would Epstein serve just 13 months in the county jail, but the deal — called a non-prosecution agreement — essentially shut down an ongoing FBI probe into whether there were more victims and other powerful people who took part in Epstein’s sex crimes, according to a Miami Herald examination of thousands of emails, court documents and FBI records.