I completed the first half of this article a few of weeks ago sharing the oath every elected legislator and senator takes when assuming his/her elected position. I believe it is unfortunate that they just mouth the words and never think about the solemn oath they take. Why? I don’t know. Many of them have law degrees and should understand that words have meaning. They all can’t be totally ignorant or liars in the manner in which they represent their constituency can they?

The older I get the more baffled I become, yet in spite of their conduct, the preponderance 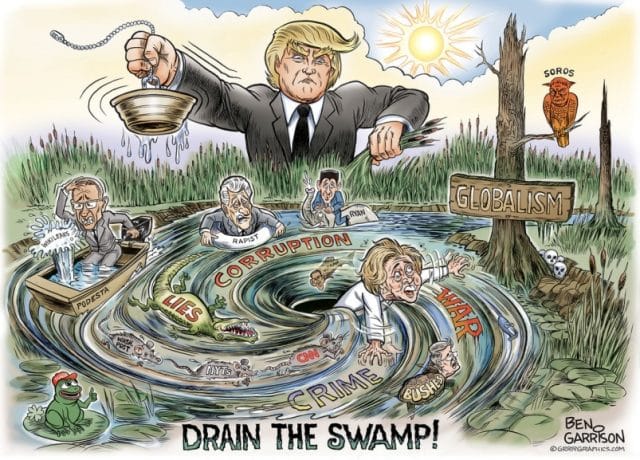 of those in congress get re-elected every election regardless of the fact that the public only gives congress an approval rating of 21%. This ranks them near the bottom of the cesspool along with: TV reporters (23%), lawyers (18%), business executives (16%), and lobbyists (8%). For all the banter, the threats by the Democrats to impeach the president, and the bogus frame-up that Trump worked with the Russian to win the 2016 elections, isn’t it odd that the approval rating of Congress is far below the public’s approval rating of Donald Trump (45±5%) according to Rasmussen. Actually Trump’s numbers are 5% higher than Obama at the same period in their terms.

This confirms my opinion that regardless of the facts and verifiable evidence (not conjecture and innuendo), Congress just will not listen to the people and get back to their jobs as legislators. My one thought on these dismal numbers is that the way the Legislators keeps seeing their approval numbers drop, how long do you suppose it will take for Congress’s rating to fall below those on the very bottom of approval charts such as bank robbers, murders and pedophiles?

It is hard for a thinking person to forget that Congress enacted the Congressional Accountability Act , which is a secret settlement account they set up for themselves to buy-off allegations by government employees over sexual harassment and other employee abuses such as over-time pay disputes and violations of the Fair Labor Standards Act, the Family and Medical Leave Act, and the Americans with Disabilities Act.

Records show that the amount of taxpayer money used to bury such claims has amounted to $17,000,000. But this doesn’t tell the whole story as many members, such a John Conyers (D-Michigan) paid $27,000 out of his federally funded office budget to settle a harassment claim pressed by a staff member. The arrogance of these elite bozos is To file a complaint, employees must go through a 90-day “mandatory dispute resolution process,” the first step of which is counseling — for the accuser. Yes, you read that correctly. The alleged harasser isn’t forced to get counseling. The victim is. We the taxpayers are pure and simple “suckers” for these kinds of shenanigans by our “elected leaders”.

Certainly neither major political party is without sin. My personal beliefs leads me to believe however, that the Democrat Party, following the attempted lynching of Justice Brett Kavanaugh and the post-election efforts to stuff the ballot boxes in several states to steal the House elections, shows to what depths the Democrat Party will employ to keep its iron grip on power and is about as un-American, un-trustworthy, and disgusting as their history of racial bigotry and dishonesty. 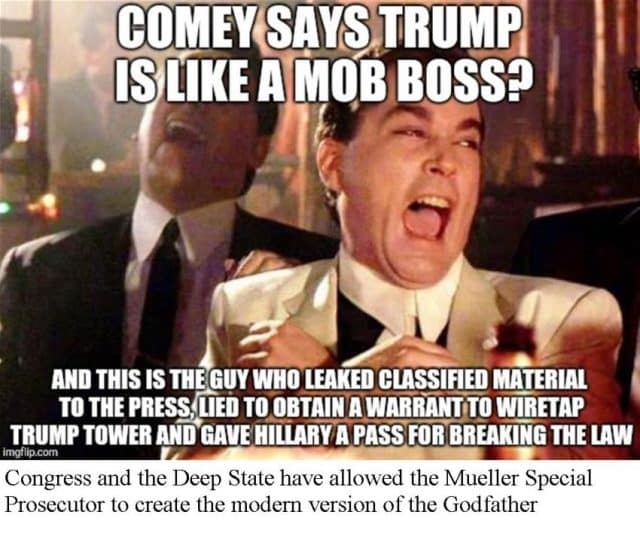 That brings us around to the Democrat Party and the issue of the Racketeer Influenced and Corrupt Organizations Act commonly called the RICO Act. As an opening salvo across the bow of the Democrat Ship of Fools according to Government Accountability Institute (GAI) research director Eric Eggers, Florida Democrats should be investigated under the RICO Act according to a fraud expert interviewed.  Florida Democrats sent “Cure Affidavits” to people who had  improper absentee ballots. The affidavits were altered to place an incorrect date on them. They were sent out the day AFTER the election.

However, to violate RICO, a person or organization must engage in a pattern of racketeering activity connected to an enterprise. The law defines 35 offenses as constituting racketeering, including gambling, murder, kidnapping, arson, drug dealing, bribery. Significantly, mail and wire fraud are included on the list. These crimes are known as “predicate” offenses. To charge under RICO, at least two predicate crimes within 10 years must have been committed through the enterprise. So . . . just the reprehensible violation of vote tampering (election fraud), won’t qualify the Democrats of racketeering, so below is a list of collective offenses that would gag a maggot and certainly enough fodder for the RICO statute to be used against the Democrat Party as a whole!

While I contend the National Democrat Party has committed enough criminal violations to qualify for prosecution under the RICO Act, the Florida branch of the Democrat Party is an example, however most readers of this column can certainly remember instances in their own states as well that meet one of the two offenses over a 10-year period that fall under RICO. On the face of it, the Democrats thought they could get away the “Cure Affidavit scheme” and that they’d find a sympathetic judge to rule in their favor. Because they used the U.S. Mail, that stupid maneuver opened them up to the “criminal enterprise” provision, the first of the 2 violations required to allow them to be prosecuted under RICO.

Yes, to answer your questions, political parties can be subject to the RICO law when they are working to create an “enterprise.” Since the Party has been corrupt since 1865 with the KKK and the Jim Crow laws, if someone doesn’t see the pattern of racketeering, they should probably contact someone from the Helen Keller Institute for the Blind. The law has a statute of limitations of 4 years, so the Dems can’t be held accountable for all the thousands of violations since 1865, but there is definitely a pattern that had been un-ending.

The RICO statute includes mail and wire fraud, and is the same law used to charge Mafia members. For purposes of the statute, the requisite mailing can be done through the postal service or a private carrier, and the requisite wire communications include radio transmissions, telephone calls and e-mails. Significantly, the requisite mailing or wiring need not itself contain any fraudulent information and may be entirely innocent, but nothing the Democrats do is “innocent”. It is always deliberate, and either covered up or blatantly supported by the corrupt media.

According to U.S. Code, Title 18  Part I, Chapter 63, Section 1343, “Whoever, having devised or intending to devise any scheme or artifice to defraud, or for obtaining money or property by means of false or fraudulent pretenses, representations, or promises, transmits or causes to be transmitted by means of wire, radio, or television communication in interstate or foreign commerce, any writings, signs, signals, pictures, or sounds for the purpose of executing such scheme or artifice, shall be fined under this title or imprisoned not more than 20 years, or both”.

As pointed out, the Florida “Cure Affidavit scheme” was the “opening salvo” into the racketeering allegations against the Democrat Party, but let’s just take a walk around the park of Democrat activity that begs to ask the question of “Why hasn’t the Justice Department made a concerted effort to investigate the below activities and seek indictments to bring all the these law breakers together for violations of the Racketeer Influences and Corrupt Organization Act”? 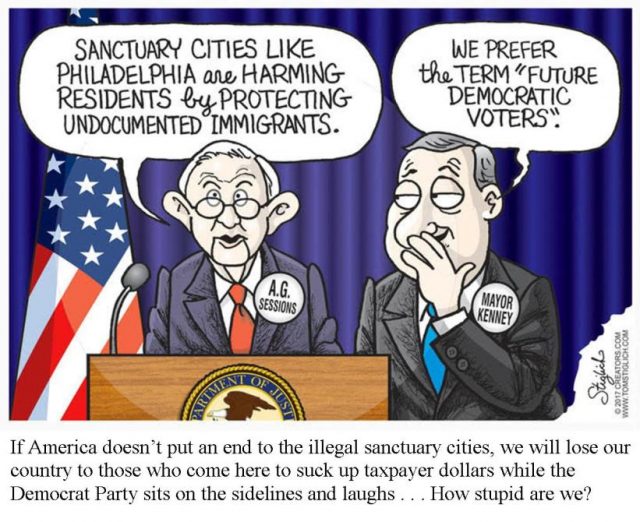 and harboring certain aliens – section 277 (relating to aiding or assisting certain aliens to enter the United States), or section 278 (relating to importation of aliens for immoral purposes) if the act(s) were committed for the purpose of financial gain. The Democrat Party, with their  long list of “Sanctuary Cities and States” (entities under the control of the Democrat Party cabal) are in direct violation of the very laws the elected politicians swore to uphold.

Additionally, when U.S. cities and even entire states declare themselves to be “sanctuaries” for illegal aliens, they act outside the law, and by their actions should be charged with a felony for each violation. When the federal government fails to arrest state officials who knowingly and willfully defy our immigration laws, they are proving the point conservatives have been making that there is no longer true just in America. The Democrats have made a mockery out of it.  When cities and states act by concealing, harboring, or sheltering illegal aliens, they are in violation of U.S. Code, sections 1324 and section 1325; Immigration and Naturalization Act sections 274 and 275).

Sanctuary cities and states demonstrate a complete contempt for the laws of the United States, a contempt that threatens to undermine our country by encouraging those who have little to contribute to the economic well-being of our country, do not speak our language, and are only seeking residency to suck as many benefits as they can from our social services, which were designed for taxpaying American citizens who need a temporary helping hand in tough times.

The Democrats behind this insidious plot to destroy our country in direct and flagrant abuse of the U.S. Constitution and the laws that were legally passed by our legislative bodies encourage anarchy and should not be allowed under any circumstance. The very notion that that this illegal alien cancer has been allowed to exist, not only interferes with the nation’s immigration policies but also places American citizens and law enforcement personnel at risk from the crime and negative health issues that accompany those who have not been properly vetted according to the Immigration and Naturalization requirements those who came here legally had to undergo. Since our immigration laws are not optional those who have sworn to uphold the duties of their office, need to be investigated and prosecuted.

The RICO Act was written into law to prevent the kinds of racketeering and corruption being perpetrated on the taxpaying citizens of the United States, and certainly, as the above instances point out, the country will not survive as the respected and prosperous leader of the free world, if we the people do not demand accountability.